Welcome to our elemental shaman guide for WoW Classic! Much like the alliance-only paladin class, the shaman is exclusive to the horde. Unlike the paladin, shamans only have the option between a healing role and a damage role. However, shamans have two specializations they can use to deal damage with.

Elemental shamans allow them to primarily cast spells from afar. Though the spec may seem simple initially, you’ll need to understand several things about how the class functions. In this guide, we’ll cover the best race options, talent choices, and the smartest rotation you can use to maximize your value. Optimizing your character is important for any class, so we’ll also cover stat priorities, consumables, best professions, and any enchants you’ll need to put yourself over the top.

Shaman totems for buffs to nearby party members and the use of Reincarnation to revive upon death to safe time after a wipe are invaluable to a raiding environment. Most hybrid classes that don’t focus on damage tend to have mana issues, and the elemental shaman is no exception. If you’re dedicated to keeping a healthy supply of consumables and playing the specialization into later raid like Ahn’Qiraj, you’ll see what makes the class so powerful!

Shamans can only be played as a member of the horde. They cannot be an undead, but they can be a tauren, troll, or even an orc. For the elemental specialization specifically, a troll is clearly the best choice. This is because of Berserking, which allows for increased spell casting speed depending upon how much health is missing.

Outside of a troll, neither orcs or taurens offer particularly useful advantages for an elemental shaman. Elemental shamans won’t benefit from an orcs Blood Fury as it only increases attack power, nor will you do much melee attacking. Tauren don’t have any offensive benefits, but are a little beefier due to Endurance and War Stomp.

The best choice is a troll, but Berserking isn’t as useful as it might ordinarily seem because elemental shamans do have issues with mana. Increasing your casting speed will only serve to increase how quickly you’ll lose your mana pool. However, the elemental specialization does require a healthy supply of consumables, so you shouldn’t be worrying about running out of mana.

Check out all the racial options here!

When it comes to talents, there are certainly plenty of options, but there’s only one really useful build for a raiding environment. If you’re choosing to solo or do PvP, you could definitely benefit from talents like Eye of the Storm and Elemental Devastation, times where you’re guaranteed to receive critical strikes and also might already happen to be in melee range. Since that isn’t the case in a raid environment, talents like those don’t work as well. Ultimately you’ll want to pick talents based on how they help you accomplish whatever you’re trying to do! 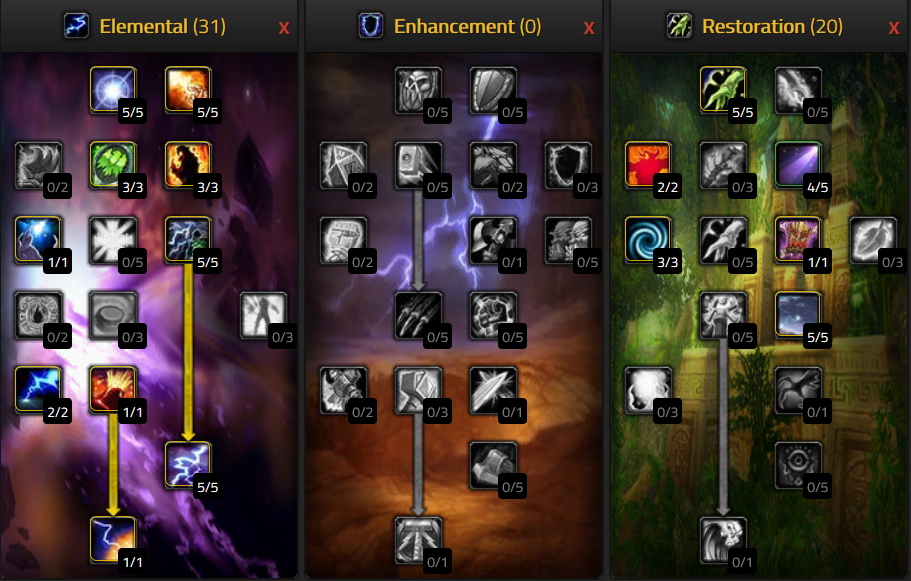 This 31/0/20 elemental build will likely be what you use for the entirety of the time you raid. This build makes sure to pick up important restoration talents with 3 points in Nature’s Guidance to lower your hit cap and a point in Totemic Mastery to boost the range of your totems. It also has all the important talents of an elemental shaman, like Elemental Mastery and Elemental Focus. While you don’t need to move any talents around, you could take points out of Tidal Mastery in the restoration tree to pick up 5 points in Ancestral Knowledge or anything else you choose.

When you first start gearing up your elemental shaman, it may feel a little underwhelming. Truth be told, elemental shamans do suffer from the lack of any kind of nature-based spell debuff. However, raids like Ahn’Qiraj have gear with special stats that decrease the magic resistance of enemies hit by your spells, which effectively works as spell penetration and drastically boost your damage. Outside of that, there’s plenty you can do to ensure you do the most damage and off as much utility as possible as an elemental shaman!

Stat priorities for an elemental shaman are similar to other casters, but there are a few key differences because of the type of gear they use. Shamans wear leather until level 40, after which they wear mail. This means that they share a similar armor to hunters, who also happen to often need similar pieces of gear with agility and intellect on it. Agility is great for enhancement, but it isn’t as useful for an elemental shaman.

Considering all those concepts, here are stat priorities for an elemental shaman:

The use of weapon skill isn’t as important for elemental as it is enhancement, but it is valuable in the unfortunate scenario that you run out of mana and need to get in some melee swings. Each weapon type has a corresponding skill level for both one and two handed variants, so make sure to cap off the skill level for whatever type you have equipped.

In addition to make sure you deal the most damage, each weapon skill point gives you:

Elemental shamans have plenty of choices when it comes to professions, as they can benefit from several different sources. Core gameplay of a shaman requires frequent use of potions, so you could save plenty of money by picking up alchemy. Alternatively, gearing can be a challenge, which you can overcome by crafting your own through leatherworking.

Although you really could pick any, here are the best professions for an elemental shaman:

Another core staple of optimization is the use of enchants to further enhance the power of your armor. There are several pieces of equipment that can be enchanted, so you’ll want to do your best to acquire as many as you can. These can get fairly expensive, so make sure you’re only enchanting pieces you plan to keep around for a while. Elemental shamans prioritize enchants that offer spell power bonuses, which you’ll find many of below.

Here are optimal enchants to have as an elemental shaman:

No character is truly ready for a raid without a giant stack of consumables! While an elemental shaman might not need as many as a tank or other needy classes, you will still need a good amount of your own. Similar to enchants, you’ll primarily want consumables that boost your overall spell damage. Additionally, you’ll want as many mana-restoring items as you can get your hands on to keep your rotation fluid!

Here are all of the strongest consumable choices for an elemental shaman:

Although the spec has an admittedly simple rotation, there are still plenty of concepts to understand in order to play the class well. You’ll definitely need to master usage of your totems and keeping your mana in check to get the most out of your elemental shaman.

One thing you’ll definitely need to pay attention to is your mana. You can actually cast a lower rank of Lightning Bolt, Rank 8 specifically, to deal a little less damage at a reduced mana cost. This works out overall to you casting the spell for longer, which results in more damage overall despite a lower base value. When you really start to run low on mana, prioritize keeping your totems active for other members of your group rather than spamming Lightning Bolt.

Another ability an elemental shaman has is Reincarnation. You can return to live upon death using an Ankh, which can help shorten the time to recover from a raid wipe. Instead of the whole group running back, you can resurrect healers who can then revive the rest of the raid.

As an elemental shaman, you’re primarily brought along in a raid for your utility rather than your damage. While this doesn’t mean that you won’t put up some respectable numbers, it does mean that you often have responsibility outside of strictly dealing damage.

Your largest responsibility comes in the form of deploying your totems. At any given time, you can have one totem of each element. This means one air, fire, earth, and water totem for a total of four at a time. For elemental, your fire totem isn’t relevant to the rest of the raid, but the other three are. These totems only affect you and the other four other members of your group, so your totem choice will depend on group composition and need.

For your air totem, you have a few choices. Grace of Air Totem will give +77 Agility to all nearby party members. Alternatively, Windfury Totem is often much stronger, granting a chance on hit for an extra melee attack. If you need a defensive air totem, you can use Windwall Totem to reduce ranged damage or Tranquil Air Totem for 20% less threat generation.

Your water totem probably has the most flexibility. The most useful options are Disease Cleansing Totem and Poison Cleansing Totem, both of which remove one negative effect from a party member every 5 seconds. If you don’t need either of those for a specific fight, Mana Spring Totem is great for extra mana, or even Healing Stream Totem to help soak up some damage.

Your earth totem also has some options. Strength of Earth Totem is great for +77 Strength to nearby party members, but doesn’t help you as a caster. A safer choice is Stoneskin Totem, which reduces melee damage taken.

Master your elemental shaman requires coordination with your raid group to figure out what totems are best suited for the group you’re placed in. While you might benefit from specific totems for yourself, it’s often more worth it to sacrifice your own benefit for the good of the whole group.

The rotation for an elemental shaman is fairly simple, but you will need to keep a vigilant eye on your mana pool throughout a fight. You’ll want to use mana potions on cooldown, as well as any demonic/dark runes that you have laying around.