Welcome to our strategy guide for the exciting Opera Event of Karazhan in Burning Crusade Classic! This unique encounter is unlocked by killing Moroes and is the second required fight of the raid. There are three different fights you may experience that feature bosses from popular story tales. Each varies in difficulty, but none are overly difficult and should be manageable by a raid group that can handle Moroes. There’s a lot to unpack in this fun encounter, so let’s get started! 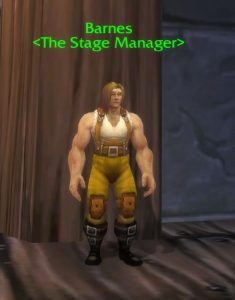 The Opera Event will begin after speaking with Barnes near the stage. Pull trash packs one at a time and use CC as much as possible to mitigate incoming damage. After speaking to Barnes, one of three different folk tale-themed fights will start, including Little Red Riding Hood, Romulo and Julianne (Romeo and Juliet), and the Wizard of Oz. The encounter you face is random, but whichever one you see will last for the whole week and change upon raid reset.

It is recommended to have one raid member sacrifice themselves by removing all equipment and starting the event solo to scout which encounter will be faced. They will die unless the Red Riding Hood event is selected, which requires speaking with an NPC before the boss becomes aggressive. Once you know which event is chosen, you can plan accordingly before making a real pull. For simplicity, we’ll separate strategies for each encounter into their own section below.

As you may expect, you’ll be facing The Big Bad Wolf for this variation. He has three abilities to watch out for, including Terrifying Howl, Wide Swipe, and the iconic Little Red Riding Hood. Roughly every 30 seconds, the boss will use Terrifying Howl, which will fear all nearby raid members for 3 seconds. Wide Swipe is usually cast around the same time, which stuns The Big Bad Wolf’s current target for 4 seconds.

More concerning is his Little Red Riding Hood spell. This will transform a random raid member into Little Red Riding Hood, removing all defensive stats and making them unable to cast spells or attack. There’s also a high chance that the boss decides to chase after them, which is likely to result in a death, especially if combined with a Wide Swipe. Fortunately, whoever is affected will receive a 50% movement speed buff to help.

Putting this together, the fight is fairly simple and just needs proper positioning and a plan for handling Little Red Riding Hood. You should tank the boss in one of the room’s corners, having melee DPS on either rear corner of him. If you have any shamans, place Tremor Totems to mitigate fears. When he casts Little Red Riding Hood, all DPS should slow down and allow the tank to generate aggro while he is chasing his target.

Have a priest in the raid cast Fear Ward on whoever is transformed to avoid a death from an untimely Terrifying Howl. The Little Red Riding Hood target should run towards the healers and run in a large circle around them. It’s important to avoid running too far ahead of the boss as he will gain a movement speed buff. If you stay just ahead of him, he should never catch up and you’ll survive unless he casts one of his other two spells. In case of emergency, a paladin can use Blessing of Protection to save the target or a warrior can mitigate with Intervene. Individually, hunters can Feign Death, mages can Ice Block, and rogues can Vanish.

Healers should prepare to overheal the Little Red Riding Hood target just to be safe. Give the tank time to regain control of the boss after he stops chasing his target. From here, the fight will repeat roughly every 30 seconds. Going slow and steady, focusing on keeping the Little Red Riding Hood target alive is key to killing The Big Bad Wolf. This is arguably the easiest fight of the three and shouldn’t pose much of a threat to an organized raid group.

The Romulo and Julianne event entails slaying the two aforementioned lovebirds. It is a three-phase fight that will have you face both bosses, first individually and then together. While the fight is extremely easy until the final phase, we’ll split each phase into a breakdown below.

The first phase belongs to Julianne. She casts spells and is arguably the tougher boss because she can heal via her Eternal Affection spell. This must be swiftly interrupted to avoid prolonging the fight and draining healer mana. She will also cast Powerful Attraction, which will stun a target for 6 seconds. It can and should be interrupted if you have multiple interrupters. The other spell she will cast is Blinding Passion, dealing moderate damage initially and applying a DoT. Again, interrupt this if you have spare interrupts, but prioritize it below the other two spells.

The last thing to watch out for is her Devotion ability. This is a buff that lasts 10 seconds, boosting casting speed by 50% and holy damage by 50%. Fortunately, it can be dispelled and/or stolen. This should be immediately removed by a mage’s Spellsteal. Alternatively, you can use a warrior’s Shield Slam, Purge from shamans, Dispel Magic from priests, or Devour Magic from a warlock’s felhunter. Failing to remove this can quickly result in deaths and a wipe, especially in phase three. On the other hand, it can be used to speed the fight up if always stolen by mages in your raid group.

Simply burn Julianne down, remember to interrupt her abilities. Focus on Eternal Affection first, then Powerful Attraction, and finally Blind Passion. An interrupting rotation is useful to avoid wasting cooldowns. Remember to remove Devotion and deplete her health bar to start phase two.

In phase two, Romulo will take over. He only uses physical abilities and is susceptible to Disarm, which should be used whenever available. His abilities include Deadly Swathe, Backward Lunge, and Poisoned Thrust. Deadly Wathe hits all targets in front of the boss, dealing decent damage. This is easily avoided by having all melee and raid members behind the boss.

Backward Lunge slightly complicates this, deadline damage and knocking a random target backward a far distance. To combat this, you should tank Romulo with his back to a wall, with the raid positioned against the wall. This will limit knockback distance and maximize damage uptime. Poisoned Thrust is a stacking poison that reduces all stats by 10% per stack. It can and should be removed to avoid a tank death.

Lastly, Romulo also uses a self-buff, Daring. This increases his attack speed by 50% and damage by 50% for 8 seconds. It must be removed via the same spells used for Julianne’s Devotion, although it is recommended to only use Spellsteal on Julianna to prepare for the next phase.

Putting this all together, phase two and Romulo is quite easy to manage. Just set up positioning properly to start the fight and prioritize removing Poisoned Thrust. Try to conserve mana usage to save for the next phase. Kill the boss and the final phase will begin.

Phase three is when the fight becomes a challenge because you’ll face Julianne and Romulo. Neither boss gains new abilities, but they must be killed simultaneously (within 10 seconds of one another). Mechanic-wise the phase is not difficult, but having less mana will pressure the raid to finish the encounter quickly.

To complete phase three, you just need to execute phase one and phase two at the same time. You can do this by splitting the raid in two groups; one for each boss. The group assigned to Romulo should be ranged-focused to naturally avoid damage and the Julianne group should be melee-oriented to simplify interrupts.

For phase three, the top priority is to remove buffs from both bosses. Interrupting Julianne’s Eternal Affection is also critical. You must also stay on top of removing Poisoned Thrust from whoever is tanking Romulo. If you can manage these three mechanics, everything else is manageable and easily avoided.

Keep up precise execution and slow DPS on either boss if it drops too quickly. Kill them both at the same time to finish the encounter. This fight is an easier version of the Moroes encounter, which means any raid that reaches the Opera Event should be able to clear the Julianne and Romulo fight.

The Wizard of Oz fight will have you face several mini-bosses named after Dorothee and her friends, including Strawman, Tinhead, Tito, Roar, and The Crone. It is technically a two-phase encounter and managing multiple different adds will be overwhelming. The fight begins with just Dorothee, but she will quickly spawn Tito and Roar, Strawman, and Tinhead will appear shortly thereafter. After all five Oz bosses die, The Crone will appear.

Despite there being several bosses to juggle, none of them are individually overly powerful. Few abilities aside from an AoE fear are used, which means that raw damage output is the biggest concern during the fight. This means that it’s mostly a DPS race with few mechanics to manage. With this in mind, you should assign a kill order to effectively clear through Dorothee and her allies. We’ll split the two phases into separate strategies below.

The best strategy involves killing Dorothee first because she does the most damage, appears first, is uninterruptible, and cannot be tanked. She uses Water Bolt, dealing heavy damage to a random target. Dorothee has the largest health pool (equal to The Crone) and the fight gets much easier once she dies. After she is dead, quickly kill Tito. He is not a threat, just a nuisance due to his interrupts, and will enrage if killed before Dorothee.

With two bosses dead, you should now focus on Roar. He uses an AoE fear and will attack with melee. You can easily handle him via repeatedly using a warlock’s Fear and a hunter’s Scare Beast throughout the fight as he is particularly vulnerable to fears. You can also tank him with a warlock.

Strawman is next. He is a very basic fighter, only using a heavy-hitting auto attack. His weakness is fire abilities, which have a good chance to disorient him for 6 seconds. With multiple fire mages in the raid, he can effectively be CC-locked and minimize any damage he deals. Without fire mages, you should kill him before Dorothee.

The last boss to kill is Tinhead. He must be directly tanked by the main tank. He deals fairly light melee damage, but can also cleave. During the fight he will gradually rust, which makes him move slower. This allows the tank to kite him, reducing his damage output and easing the burden on healers. You can kill the bosses in any order, but the order mentioned above is easier.

Whichever strategy you choose, The Crone will spawn after Dorothee, Roar, Strawman, and Tinhead are dead (Tito doesn’t need to be killed, but he will be an annoyance to healers if not finished off). She has the same amount of health as Dorothee and uses just two abilities, meaning that the fight is often quite simple upon reaching this point.

Her two abilities include Cyclone and Chain Lightning. Cyclone spawns a cyclone that will knock up whoever is hit, dealing heavy damage and falling to the ground. These also move around the room, so raiders must be watching and move away from them when nearby. Someone in the raid should be assigned to watching and calling out cyclone positions to help the raid avoid a wipe. Chain Lightning hits up to five targets for decent damage, meaning that spreading out is highly encouraged.

As you can see, phase two is easy and you only really need to avoid cyclones. If you can get to The Crone, you’ll likely finish the encounter. Simply burn the boss down to end the fight. While phase two is certainly easier, the Wizard of Oz event is definitely the hardest of the three and may take multiple attempts to clear.