Fishing is one of the most time-consuming but rewarding professions in all of WoW. As a Master Fisherman, you can earn or catch numerous rare companion pets like Magical Crawdad and Toothy. You’ll also be able to catch fish that are used in important endgame cooking recipes like the Huge Spotted Feltail for Fisherman’s Feast, Enormous Barbed Gill Trout for Hot Buttered Trout, or Golden Darter for Golden Fish Sticks.

Overall, the benefits of Fishing for all players, regardless of class or spec, far outweigh the effort it takes to reach the skill cap, and this guide will help you do so quickly and efficiently.

To learn Apprentice Fishing, simply find a trainer in any capital city. They will also be able to teach you Journeyman.

To reach Expert, you’ll need to purchase Expert Fishing – The Bass and You from Old Man Heming in Booty Bay.

For Artisan, you’ll have to complete the quest Nat Pagle, Angler Extreme, offered by Nat Pagle himself. You’ll find him in Dustwallow Marsh, on the coast southwest of Theramore Isle. To finish it, you’ll have to hand him:

For this whole quest, make sure you’re attaching any type of lure to increase your fishing skill. Then, once you’ve caught them all, you can return to Nat, and he’ll train you in Artisan Fishing.

To become a Master, all players will have to speak with Juno Dufrain at Cenarion Refuge in Zangarmarsh to purchase Master Fishing – The Art of Angling. Once you read it, you’ll learn the Master Fishing skill and will be able to reach 375.

Before speaking about the exact process of leveling, it’s important for you to know about one key ability: Find Fish. While it isn’t an explicitly required skill, or directly trainable by purchasing a tome or completing a quest, it’s immensely useful while leveling. To learn it, you must read the Weather-Beaten Journal, which is contained in trunks fished up from wreckage pools on any continent, and like “Find” abilities in other professions, it will show schools of fish as nodes on your minimap.

In Old World content, there is an equal chance to find it in all types of trunks fished from wreckage pools (Tightly Sealed Trunk, Watertight Trunk, Iron Bound Trunk, and Mithril Bound Trunk), but in TBC content, it has the highest chance to be in Curious Crate. The Curious Crate can be fished from any school of TBC fish, and it is the most likely of all trunks in the game to contain the Journal.

That being said, it is possible to power-level entirely without the journal; it just makes looking for specific fish go much faster. Regardless, keep reading to find out about how to quickly take your skill from 1 – 375.

The fastest way to level Fishing through Artisan is to purchase Expert Fishing – The Bass and You and 1x Shiny Bauble before starting the entire process. The bauble is especially useful as you start, because if you are not able to successfully catch fish you are not able to level your skill at all.

The process of Fishing itself involves casting a line from your Fishing Pole into any body of water and waiting until it bobs up and down, meaning something is on the line. From there, you must click on the bobber to reel it in. In bodies of water, certain types of fish congregate in observable pools called “schools”, in which you will have a higher chance of catching that type of fish exclusively. Wreckage, like those that contain the Weather-Beaten Journal, also appear in pools.

Once you learn Apprentice Fishing from a trainer in a capital, leave the city immediately and find the nearest body of water in the surrounding zone. Apply the Shiny Bauble and start fishing until you reach skill level 75.

To continue, you will have to move to Dustwallow Marsh, so all players can benefit from choosing starting zones on Kalimdor. For the Horde, this could be either Mulgore or Durotar. For the Alliance, unfortunately, the best options are Teldrassil and Dun Morogh, neither of which is especially close to Dustwallow.

Once you’ve hit 75, however, return to the nearest capital city and train Journeyman Fishing.

When you’ve trained Journeyman, find whatever body of water exists in your capital and begin fishing there. For the Horde, Orgrimmar has pools of water in the Valleys of Honor, Spirits, and Wisdom, and Thunder Bluff has a centrally located pond between Spirit Rise and Hunter Rise. On the Alliance side, Darnassus has a massive body of water surrounding The Temple Gardens, and Ironforge has pools in the Forlorn Cavern and the Mystic Ward.

After you reach 125, read Expert Fishing – The Bass and You to train up to Expert. You should not leave the capital, however, as you can stay there and level your skill until it’s time to complete your Artisan quest.

Remain in your capital and continue fishing until you reach 225. This process can take several hours, so if you are not keen on dedicating all of your time to this specific area, or would like to complete quests, it’s possible to return to this later or fish in open water out in the world. That being said, casting your line in the capital is the most surefire way to level quickly.

Once you reach 225, it’s time to find Nat Pagle in Dustwallow Marsh, on the coast southwest of Theramore Isle. If you’re in Ironforge, you can take the quest I Got Nothin’ Left from Grimnur Stonebrand in the Forlorn Cavern that leads you directly to him, and if you’re in Orgrimmar, you can take You Too Good. from Lumak in the Valley of Honor that will do the same. You do not need those to begin the Artisan quest, however. Before you leave the capital, make sure to stock up on Aquadynamic Fish Attractor or Bright Bauble to speed up the upcoming quest.

Regardless of how you find him, Nat will offer you the quest Nat Pagle, Angler Extreme, which teaches you Artisan Fishing upon completion. You can refer back to the leveling section above to find a comprehensive guide on the quest and how to finish it efficiently.

Once you hand in the Artisan quest to Nat, you should stick around Dustwallow Marsh and continue fishing until you reach skill level 300.

Sometime between 275 and 300, you should also read Master Fishing – The Art of Angling to reach the final tier of Fishing.

Like a couple of the primary gathering professions, it’s advisable to stay in Old World content until you reach a bit past skill level 300, so just continue using the same pools in Dustwallow until you hit between 330 and 335.

To finish out your leveling, cross through the Dark Portal and head over to Zangarmarsh. Here, you’ll find a large number of fish schools and wreckage pools. At this stage, you should have enough skill to reel something in from them, so keep going until you hit 375. Start near Umbrafen Lake and The Lagoon until you hit about 350. Then, you can move between Marshlight, Serpent, or Sporewind Lakes.These last levels can be incredibly arduous and time consuming, but it will be worth it once you can catch whatever fish you want.

After you’ve caught enough in Zangarmarsh, you’ll cap! Congratulations! Keep reading for information about all the available equipment to enhance your skill, the Fishing Dailies available outside of Shattrath, The Stranglethorn Fishing Extravaganza, and the best lakes in all of Outlands.

When fishing at higher levels, one of the most important things that will affect your success is your equipment. By completing certain quests, winning the Stranglethorn Fishing Extravaganza, or adding enhancements to your gear, you can speed up your dailies, make farming for specific fish easier, or give yourself a competitive other anglers. Within the broad category of equipment, there are several ways to increase your fishing skill either permanently or temporarily. They include: Fishing Poles, Gear, Item Enhancements, Lures, Enchants, and Consumables.

In this expansion Blizzard has added five daily quests which can all be completed once your character has capped and your Fishing skill has reached at least 350. To begin, you’ll have to find Old Man Barlo at the lake just north of Shattrath in Terokkar. From there, he’ll offer you one of 5 options:

No matter which of these quests you’re doing, it’s always advisable to add a lure of some sort to your fishing rod, whether it be an Aquadynamic Fish Attractor, a Sharpened Fish Hook, or a Bright Bauble. These will make sure that you’re able to catch the specific quest fish you’re looking for instead of other, unneeded ones.

All 5 quests offer the same reward: a Bag of Fishing Treasures. Inside can be any number of things, including companion pets, cooking recipes, and fishing equipment. The most notable, potential contents of the bag are:

In addition, when the Daily is Crocolisks in the City, you’ll also have a small chance (~10%) to find a mini-crocolisk companion pet in the Bag of Treasures. They could be either:

Every Sunday from 14:00 – 16:00 server time, there is a realm-wide event which takes place in Stranglethorn Vale. The Stranglethorn Fishing Extravaganza is a contest of all player’s Fishing skill, regardless of faction.

During the event, a number of rare fish are able to be caught throughout STV from School of Tastyfish — an event-exclusive pool. A player wins by being the first to catch 40x Speckled Tastyfish and returning them to Riggle Bassbait in Booty Bay. If you are lucky enough to win, you’ll be able to choose between:

And, even if you aren’t the player lucky enough to win, there are still other rare fish that can be turned in to Fishbot 5000 at any point in the Derby for different rare items. They are:

In terms of strategy, there is relatively little that can be done to increase your chances of winning, other than adding lures to your rod to increase your skill and potentially using Mithril Spurs to increase your mounted movement speed. The Extravaganza tests both your patience and luck, and if you don’t win one week, you are always able to try again until you do.

In the mountains of Terokkar, there are three lakes that can only be reached by using a flying mount: Blackwind Lake, Lake Ere’Noru, and Lake Jorune. These three are the most optimal spot to find Highland Mixed School, a type of fish school that contains some of Outlands most desirable fish. These schools have the highest drop rate of Furious Crawdad in the entire game. As well, you can catch Golden Darter, Enormous Barbed Gill Trout, and Huge Spotted Feltail.

Finally, these pools are also the only place where you’ll be able to catch Mr. Pinchy, the item which gives you a chance of acquiring Magical Crawdad Box, the rarest mini-pet in the game. Mr. Pinchy comes with 3 charges, which can do any of the following:

To catch Mr. Pinchy, you’re best bet is to use enough gear in order to reach an effective skill level of 527 in Fishing — the highest possible. To do this, you’ll need:

The lake locations are: 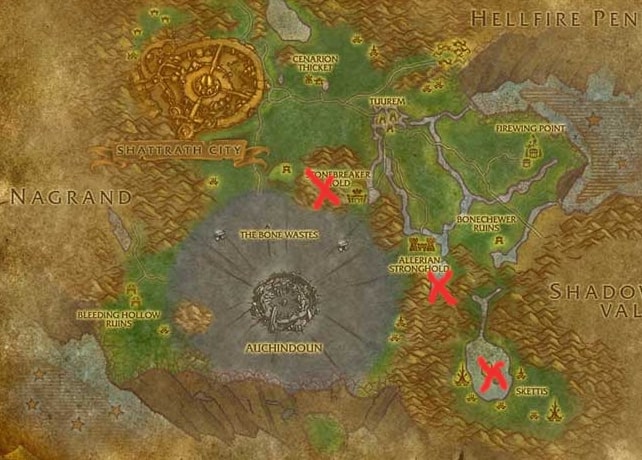 Damn bro, MONUMENTAL article! Thanks a lot. I need this fishing gear 😉