Back in April of 2016 the demand for a legacy version of Vanilla WoW was at its peak. Eventually fans were able to prevail and thanks to some talented developers at Blizzard WoW Classic was successfully released.

What you may not know is that at that time J. Allen Brack, then the Executive Producer of World of Warcraft and now the President of Blizzard Entertainment, tried to offer a solution that would be easier for them to implement. This suggestion was posted on the WoW forums and the idea was for “Pristine Servers”. You can see the full quote below, but the gist of it is:

The idea was met with a ton of negative feedback from players because what they really wanted was the original Vanilla WoW experience and didn’t trust Blizzard to abide by the design philosophy that made Vanilla so great. 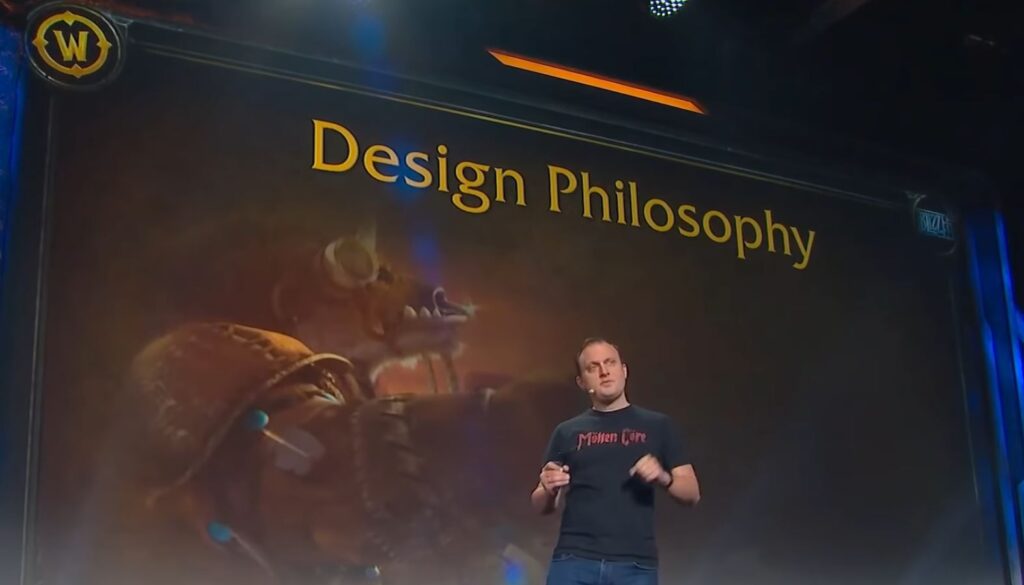 At the time it made sense, and I think Blizzard did a great job with Omar Gonzalez making several important discoveries when porting the old content to the new client that enabled WoW Classic to be released at all. And as much as I’m loving playing WoW Classic I’d still like to be able to enjoy retail as well more than I currently do.

Right now WoW is a very different game than it started out, leveling is nothing more than a nuisance and players just want to get to the level cap and start gearing and doing Mythic+. This carries over to the Shadowlands alpha where players are outleveling an entire expansion worth of content in less than 10 hours. I wrote an article about my unpopular opinion about leveling in WoW not long ago so I won’t rehash it here.

But there are a lot of players that still want to enjoy the RPG element of the game and I think that’s where Pristine Servers, or some variation of it, could come into play. Being able to take extra time and level through Cataclysm or the Warlords of Draenor expansion while gearing up and running the dungeons from that expansion sounds amazing. They could even take it a step further and allow players to turn off XP so they can do that expansions raids at level 50 before moving on to Shadowlands.

This would allow players who aren’t interested in the M+ grind and just want to put the RPG back in the MMORPG be able to do so. It should be simple enough for Blizzard to do this and test it with a few server to see what players think.

We wanted to let you know that we’ve been closely following the Nostalrius discussion and we appreciate your constructive thoughts and suggestions.

Our silence on this subject definitely doesn’t reflect our level of engagement and passion around this topic. We hear you. Many of us across Blizzard and the WoW Dev team have been passionate players ever since classic WoW. In fact, I personally work at Blizzard because of my love for classic WoW.

We have been discussing classic servers for years – it’s a topic every BlizzCon – and especially over the past few weeks. From active internal team discussions to after-hours meetings with leadership, this subject has been highly debated. Some of our current thoughts:

Why not just let Nostalrius continue the way it was? The honest answer is, failure to protect against intellectual property infringement would damage Blizzard’s rights. This applies to anything that uses WoW’s IP, including unofficial servers. And while we’ve looked into the possibility – there is not a clear legal path to protect Blizzard’s IP and grant an operating license to a pirate server.

We explored options for developing classic servers and none could be executed without great difficulty. If we could push a button and all of this would be created, we would. However, there are tremendous operational challenges to integrating classic servers, not to mention the ongoing support of multiple live versions for every aspect of WoW.

So what can we do to capture that nostalgia of when WoW first launched? Over the years we have talked about a “pristine realm”. In essence that would turn off all leveling acceleration including character transfers, heirloom gear, character boosts, Recruit-A-Friend bonuses, WoW Token, and access to cross realm zones, as well as group finder. We aren’t sure whether this version of a clean slate is something that would appeal to the community and it’s still an open topic of discussion.

One other note – we’ve recently been in contact with some of the folks who operated Nostalrius. They obviously care deeply about the game, and we look forward to more conversations with them in the coming weeks.

You, the Blizzard community, are the most dedicated, passionate players out there. We thank you for your constructive thoughts and suggestions. We are listening.

I first of all want to say that I really enjoy the game and the content. I have one major issue and that is with the gear that can be gotten in dungeons. I find the idea of dungeons great and going into content with a small group of people and seeing how well they can work together. My only part of contention is that without going into a “raid” I can’t get any really high level gear and I don’t have hours at a time to sit and play. You took trades away from even and the gear that is of descent quality is mostly unattainable until it is obsolete in crafting. I love leveling my blacksmith trade and I usually make things for people who ask but lately I can’t give anything away as it is all bound on pick up. Waste of time and energy to level mostly as I cannot go where the components are found (raids) or the continuing quest takes many many months to gather all requirements if they are ever gathered by the casual player. Rewards for question or following a story line are useless and mostly are not worth the effort. I wish a player could attain about 85% of the capabilities or gear as those raiding players get but this seems unimportant to the developers as they only like pvp or raiding, the rest are fodder to fill the space. Thanks for listening.

I find the current aspect of the game mindless and as exciting as a game of solitaire. I have always enjoyed PvE, PvE guilds, I always loved the story lines . Not big on endgame content. Even now, I looked for ways to turn off the bonus experience currently in effective because I was leveling too fast.. Like life, it’s the journey not the destination.. Over emphasis on end game is what turned off a third of the player base after WotLK and put me on hiatus for a few years.

Just comical. Can’t believe what retail has become. I is it anything like what World of Warcraft is all about. Get a level 700 weapon just for successfully logging in on your first attempt.