Mists of Pandaria, to Buy or Not to Buy?

World of Warcraft expansions are always a cue for the gaming industry to get excited as the fans divide themselves down the middle. Half of the Warcraft fans herald the expansion as the saviour of the MMO while the other refuse to have anything to do with it because it changes something that they think is fundamental or because it includes pandas or something.

The latest World of Warcraft expansion called Mists of Pandaria is due for release on the 25th September this year.

‘Mists of Pandaria’ brings with it…

You can find more info on all of those here on the Official Mists of Pandaria site and the trailer just a eye-movement away.

It’s been out for pre-order for a while, but up until recently I wasn’t even sure if I was going to buy it. I had been playing Star Wars: The Old Republic and enjoying it well enough, but I found myself missing the familiarity of World of Warcraft. Over a few days, my enthusiasm with SWTOR disappeared altogether and was replaced with wow. So much so, that I cancelled Star Wars and subscribed back to World of Warcraft.

Even while I was playing, I knew that were so many things against the new expansion that it seemed pretty silly and wasteful to buy it. The biggest issues I had with Mists of Pandaria were…

They were, and in many ways still are the issues that run across my mind. Though honestly, the panda thing doesn’t bother me that much. I’m not a lore junkie, if you can have giant talking cows why not giant talking panda’s. Regardless, I know that all those issues will still be there come launch day. 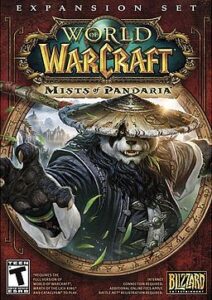 Yet I know that I am going to buy it. I’m not resigned to buying it, I actually think it will be quite fun. How does Blizzard do that? Make a game that can split me down the middle so much. Usually it’s so simple in my mind; Big Brother, Twilight movies, rectal examinations = bad; cheesecake, lottery wins, stroking a puppy = good. See, simple, but not where Blizzard is concerned. Diablo 3 had a similar ambivalence about it though to a lesser extent. I’ve not bought it yet but I think that was down to not affording it rather than deliberately not buying it.

So yes, I am definitely excited about Mists of Pandaria even though it includes Panda’s and WoW Pokémon. Even though I will hit the same enthusiasm barriers I do with every World of Warcraft expansion. I’m excited because I know the content will be fun to play, though for how long is questionable. Do you get free months with expansion packs? I don’t think you do, do you? Oh well.

I will probably always end up going back to World of Warcraft, it’s the familiarity of the game.I know I have used this familiarity as a reason why I left WoW in the past, but even if that was the case it’s what brings me back as well. I don’t have time to devote myself to finding out everything in another MMO, so to go to one which seems so comfortable is easy and honestly that’s what I want in a game.

So, until the post where I undoubtedly decided to leave World of Warcraft for one reason or another I’m gonna quietly look forward to the new Mists of Pandaria expansion but at the same time hope my enthusiasm has worn off before I spend the £30 to buy it.

Jim Franklin is a freelance writer, living in Derby UK with his wife and his player 3. When time allows he likes nothing more than losing himself in a multi-hour gaming session. He likes most games and will play anything but prefers MMO's, and sandbox RPG's.
Subscribe
12 Comments
Most Voted
Newest Oldest
Inline Feedbacks
View all comments

Just so you know, koalas can be quite scary. My husband has scars down one arm from where a koala grabbed hold of him and sank its claws all the way to the bone. (Sadly, I’m not even joking.) Also, koalas aren’t actually bears.

Right, my national pride is now assuaged. Carry on with your Pokemon-owning Panda Paladin. 😉

im not going to buy it. an example why would be that it used to feel like an online RPG that was epicly challenging and rewarding. the game now feels as easy as farmville with added ugly characters, flashy spells and swords. the only reason why this game has 10-12 million subscribers is because they have made it THAT easy, that easy to pick up, dumbed it down so much that any non gamer can even play it. A game is played by gamers. This is not a game anymore. Grannys are playing it. Husbands or wives are playing it for 1 hour a night instead of watching TV. kids are playing it before bed time after their schoolwork. Really… not a game anymore. A proper game has a community of dedicated and / or hardcore players who really dig into it and compete with one another. This game has losers running around battlegrounds not giving a toss if they win or lose, because they get their honor points in any case. Same goes for dungeons and raids. People want fast easy runs so they insist on gear levels and achievements, no one wants to sit down and have a challenge or simply just play the damn game like it was meant to be played. real online games dont have 10-12 million subscribers, but they sure do have maybe 1-2 million active and super switched on players which warcraft has none of nowadays out of their 12 million mass of human disgrace. for that reason i am no longer going to sub or buy its expansions. the community has been shaped by blizzard to be a bunch of useless idiots, and the company has changed the game to keep these idiots addicted and paying. its an online service for fags, not actually an mmorpg.