The new World of Warcraft expansion Mists of Pandaria was released yesterday. Well Technically, due to differences in time zones it was released in the UK at 23:00 on Monday night. With a combination of both insomnia and pointlessly childish excitement I was up in the early hours of the morning eager to dive in and see all the new stuff.

First of all, I’ll get all the obvious stuff out of the way. There was and probably still is a lot of congestion in the new zones. I was alright at around 02:00 in the morning but by 07:00 the mob to player ratio was much different. Not a complaint, that’s just the way things are bound to be.

What was a little weird was seeing the ‘First on the Realm’ achievements being advertised. By the middle of the afternoon. By 13:00ish I had seen server-firsts for warrior, hunter, deathknight and warlock, although I’m sure that by now the other classes have all been achieved as well. It boggles the mind how level 90 could be achieved so quickly. I assume they had as many heirlooms and guild mates helping them as was possible but still, five levels covered in a little under five hours seems pretty damn impossible.

Anyway, I digress. I experienced a few quests in the new Pandaria zone the Jade Forest before it got too crowded, and what I had played I liked. Although the quests were of the usual ilk you would expect with an MMO they had thrown in enough different types to keep it interesting. A little side note, in the other zones the quest achievements were numeric i.e. 50 out of 100 quests done etc. For Pandaria the quests are broken down into a number of quest-lines, which have to be completed to get the achievement. I didn’t spend too long in here because quite frankly I was keen to start a new Pandaren Monk and see the new pet battle system.

The Life of a Monk

I created my new monk creatively named Mondic. Why? Honestly not sure, keen to get into the game I suppose. My monk was put through training and a few trials, he helped some elements, constantly gave a Pandaran master harder and harder things to hit his head upon, by the time he had level ten he was being summoned by the island itself, or rather the giant turtle on who’s back the island sat. An alliance ship had crashed into the site of the turtle and needed help to remove it. A few more quests, some for the Horde some for the alliance (Both offering different ways to remove the ship. ) Then the time came for me to choose a side, and this is where for me things get a bit woolly.

Through the earlier levels you were training as a monk; a peaceful warrior taught to use violence only when necessary and to respect all other living creatures. Now you have to choose a side, Horde or Alliance? Two sides of a very long drawn out and bloody conflict. My Horde monk, now wanders the countryside killing anything for a few bits of silver, apparently forgetting all his monk training. Now I know what you’re gonna say. They couldn’t redefine the questing system to have it make sense to monks and I agree but it does seem pretty weird, and it doesn’t quite make sense. I also found the starting area a bit slow, oh and don’t think you can speed it up by sending your new Pandaren some cash or items. They have no faction so cannot be mailed. It makes sense I suppose, otherwise they’d be used as a conduit to be able to swap stuff between Horde and Alliance characters.

This was the part I was really interested in, not sure why. I can only assume the OCD collector part of me went in to overdrive. Right so for those who don’t know Pet battles are a Pokémon style battle where you use your pets to either battle another players pet’s or to capture and defeat pets found in the wild.

The combat itself is pretty easy to start, right-click on a pet with a green paw print above them in the wild or use your pet journal to request a fight with a player of similar level. To fight just click on the skill you want to use, depending on the opponent pets type, some skills will be more or less effective against them. Each battle provides your pet with XP, levelling your pet and increasing their hit point and skills. It’s actually quite fun, and I can see how this will be a welcome distraction while levelling.Oh, and one thing which is definitely worth pointing out, is that pet’s like archaeology are tougher as you go through the various expansions. Critters in Durotar for example are level 1 and can be defeated by pets of pretty much any level. I wondered how the pets in the Jade Forest compared, they had 5 times the health of my pets and one-shotted me so will need to go back in 20 or so pet levels.

For some reason my pet battles stopped working for a few hours. When I tried to start a battle, I’d hear the noise, but the pet would just disappear with a message ‘failed to initiate battle’ I logged a ticket for it (which said average wait time 2 days 7 hours. Seriously?) but luckily it started working again after a few hours. Before that I had tried changing characters, logging off, clearing out the add-ons folder etc, but nothing worked so if you get this problem all you can do is log a ticket and hope you don’t have to wait a few days for the resolution. 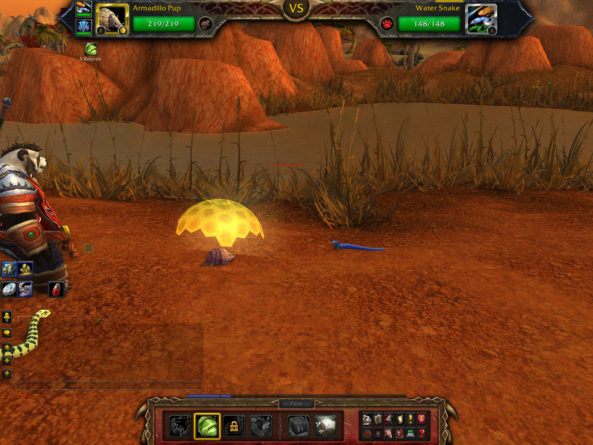 So, all things said and done is Mists of Pandaria the greatest thing to hit World of Warcraft or is it exactly the same as every other expansion? Honestly, a bit of both. There’s some new stuff which I do like, like the pet battles and the Monk class does seem pretty fun too. At the same time MoP still has the same grind to 90 and the same race to gear and so on. It’s not that different, could it ever be?

What are your favourite and not so favourite parts of MoP so far?