The Venthyr Covenant of Revendreth is one of the Four Covenants that are available in the World of Warcraft Shadowlands Expansion.
In our main guide to Covenants in Shadowlands we discuss the general features shared by all of the Covenants. In this guide we will focus on the unique look and abilities offered by the Venthyr Covenant.
During your adventures you will visit the lands of Revendreth last, preceded by Night Fae Ardenweald and all other Covenants.

The Venthyr’s grand purpose is carrying them towards destruction. Sworn to punish those decadent souls spared from the Maw with years of penance, the Venthyr are themselves becoming arrogant and corrupt. Those with worry in their hearts look to the order’s master Denathrius, as the need for change in leadership continues to grow. 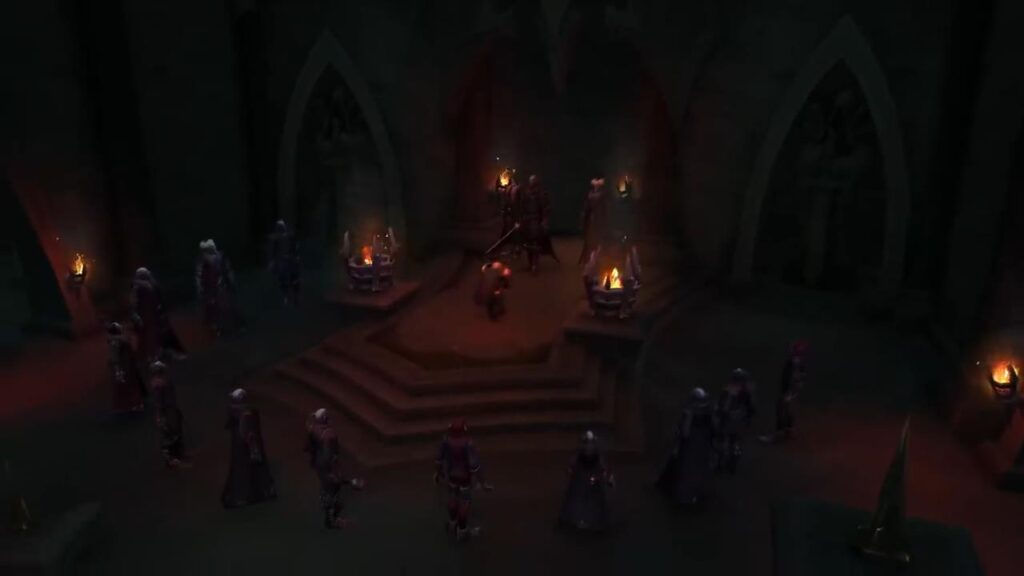 Revendreth is full of Gothic-looking castles illuminated by the twilight. Their armor likewise emits a shadowy aura, punctuated by a red and gold body and accented with purple jewels. The Venthyr back item is a stylized tombstone with ever burning candles. 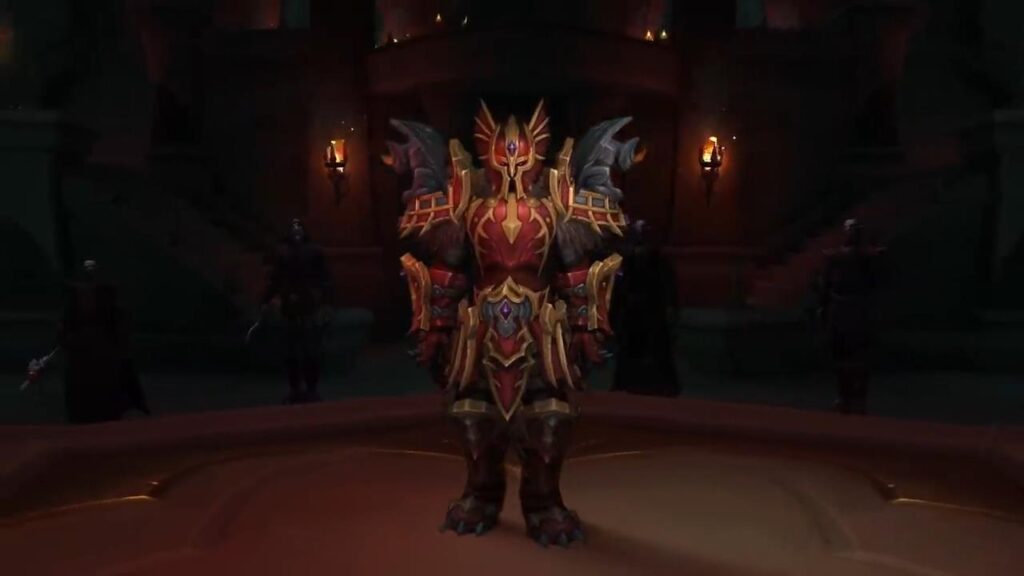 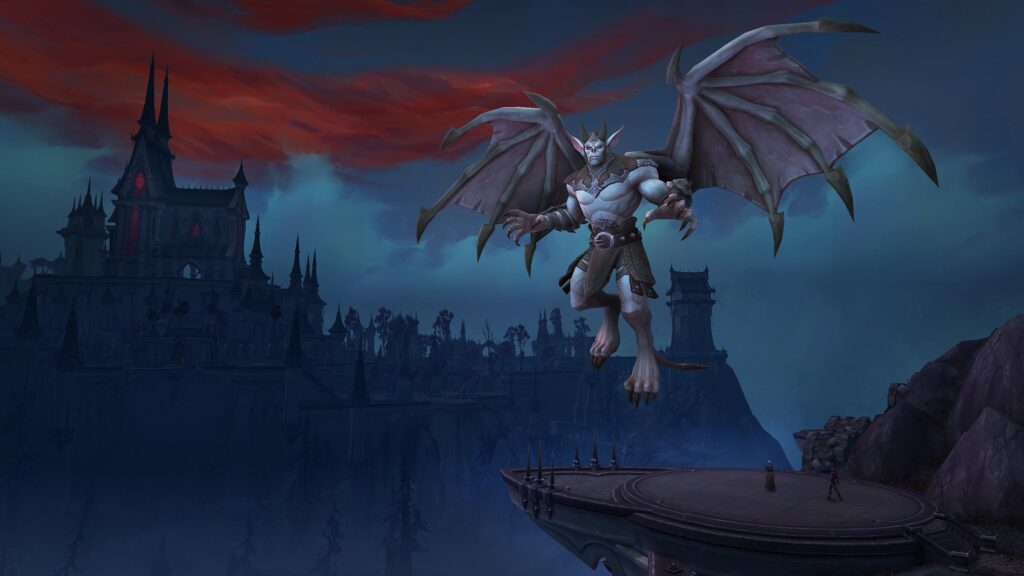 More information will be added as it becomes available.

Death Knight | Swarming Mist
1 Rune cost, Instant, 1 min cooldown
A heavy mist surrounds you for 8 seconds, increasing your chance to Dodge by 10%. Deals [20% of Attack power] Shadow damage every 1 second to enemies within 10 yds. For each enemy damaged, you gain 3 Runic power, up to a maximum amount of 15 Runic power.

Demon Hunter | Sinful Brand
30 yd, Instant, 1 min cooldown
Brand an enemy with the mark of the Venthyr, reducing their melee and casting speeds by 30% and inflicting [400% of Attack power] Shadow damage over 8 sec.
Activating Metamorphosis applies Sinful Brand to all nearby enemies.

Druid | Ravenous Frenzy
Instant, 3 min cooldown
For 20 sec, Druid spells you cast increase your damage, healing, and haste by 2%, stacking.
If you spend 1.5 sec idle, the Frenzy overcomes you, consuming 3% of your health per stack, stunning you for 1 sec, and ending.

Hunter | Flayed Shot
10 Focus, 40 yd, Instant, 30 sec cooldown
Fire a shot at your enemy, causing them to bleed for [250% of Attack power] Shadow damage over 20 sec.
Each time Flayed Shot deals damage, you have a 15% chance to gain Flayer’s Mark, causing your next Kill Shot to be usable on any target, regardless of their current health.

Mage | Mirrors of Torment
4% of base mana, 40 yd, 1.5 sec cast, 1.5 min cooldown
Conjure 3 mirrors to torment the enemy for 20 sec. Whenever the target casts a spell or ability, a mirror is consumed to inflict [75% of Spell power] Shadow damage and their movement and cast speed are slowed by 15%.
The final mirror will instead inflict [198% of Spell power] Shadow damage to the enemy, Rooting and Silencing them for 4 sec.

Monk | Fallen Order
Instant, 3 min cooldown
Opens a mirror for 24 sec, summoning reflections of your order’s fallen Ox, Crane, and Tiger adepts every 1 for 6 sec.
Fallen Monks that have mastered [1. Ox][2. Crane][3. Tiger] Style will also [1. attack your enemies with Breath of Fire][2. heal with Enveloping Mist][3. assault with Fists of Fury] and assist for an additional 2 sec.

Paladin | Ashen Hallow
30 yd, 1.5 sec cast, 4 min cooldown
Hallow the target area for 30 sec. Every 2 sec, an enemy in the area suffers (150% of Spell power) Shadow damage, and an ally in the area is healed for (160% of Spell power).
Within the Hallow, you may use Hammer of Wrath on any target.

Priest | Mindgames
40 yd, 1.5 sec cast, 45 sec cooldown
Assault an enemy’s mind, dealing [200% of Spell power] Shadow damage and briefly reversing their perception of reality.
For 5 sec, the next [(Spell power x 400 / 100) x (1 + Versatility)] damage they deal will heal their target, and the next [(Spell power x 400 / 100) x (1 + Versatility)] healing they deal will damage their target.
Reversed damage and healing generate up to 40 Insanity. / Reversed damage and healing restore up to 4% mana.

Shaman | Chain Harvest
40 yd, 2.5 sec cast, 1.5 min cooldown
Send a wave of anima at the target, which then jumps to additional nearby targets. Deals [45% of Spell power] Shadow damage to up to 5 enemies, and restores [120% of Spell power] health to up to 5 allies.
For each target critically struck, the cooldown of Chain Harvest is reduced by 5 sec.

Warlock | Impending Catastrophe
4% of base mana, 40 yd range, 2 sec cast, 1 min cooldown
Call forth a cloud of chaotic anima that travels to the target enemy, dealing [100% of Spell power] Shadow damage to enemies in its path. When the anima reaches the target it explodes, inflicting either Curse of Weakness or Curse of Tongues, and dealing [261% of Spell power] Shadow damage over 12 sec to all nearby enemies.