The Night Fae Covenant of Ardenweald is one of the Four Covenants that are available in the World of Warcraft Shadowlands Expansion.
In our main guide to Covenants in Shadowlands we discuss the general features shared by all of the Covenants. In this guide we will focus on the unique look and abilities offered by the Night Fae Covenant.
During your adventures you will visit the lands of Ardenweald third, preceded by Necrolord Maldraxxus and followed by the Venthyr Revendreth.

The order of the Night Fae was hit most from the soul-drought, since the mystic Night Fae depend on the anima from those deeply connected to nature to keep their land from withering away and slumbering spirits from getting lost forever. 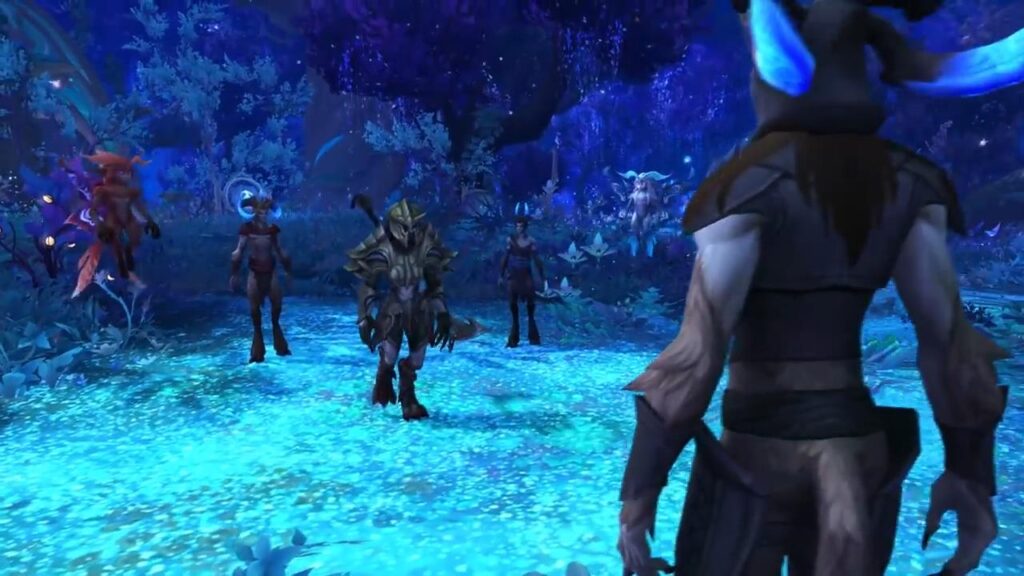 The realm of the Night Fae is full of starry lush groves and glowing creatures of nature. This matches well with the thick wooden plate of the Night Fae armor, highlighted by the purple glow and large embedded jewels resembling the starry sky. This order’s back item is a set of two similarly colored moths resting on their hero’s shoulder blades. 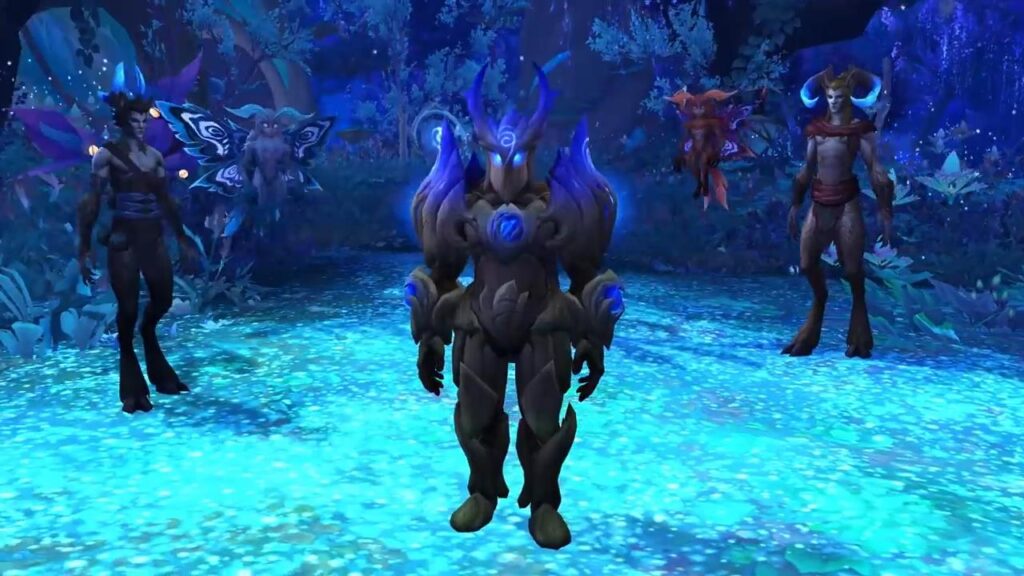 Soulshape
Unknown cast and cooldown
Turn into a Vulpin, increasing movement speed by 30%. You may reactivate Soulshape to teleport 10 yds forward.
Additional cosmetic forms can be earned and collected through a variety of gameplay.
While out in the world, this effect lasts 12 sec before it wears off, but lasts indefinitely while in a rest area.

Death Knight | Death’s Due (Replaces Death and Decay)
1 Rune cost, 30 yd, Instant, 30 sec cooldown
Corrupts the targeted ground, causing [3.6036% of Attack power x 11] Shadow damage over a 10 sec to targets within the area.
Affected enemies deal 1% reduced damage to you up to a maximum of 15% and their power is transferred to you as an equal amount of Strength.
While you remain within the area, your Necrotic Strike and Heart Strike will hit additional targets. Scourge Strike and Clawing Shadows will hit all enemies near the target.

Demon Hunter | The Hunt
50 yd, 1 sec cast, 3 min cooldown
Charge to an enemy, inflicting [250% of Attack power] Nature damage and rooting them in place for 3 sec. The target is marked for 1 min, increasing your Fury from Demon’s Bite and Shear against them by 50%.
You may reactivate The Hunt every 30 seconds to teleport behind the marked target, ignoring line of sight.

Druid | Convoke the Spirits
4 sec cast, 2 min cooldown
Call upon the Night Fae for an eruption of energy, channeling a rapid flurry of 16 Druid spells and abilities over 4 sec.
You will cast Moonfire, Wrath, Regrowth, Rejuvenation, Thrash, Rake, Shred, and Ironfur on appropriate nearby targets, favoring your current specialization.

Hunter | Wild Spirits
40 yd, Instant, 2 min cooldown
Summon a Wild Spirit at the target location that applies Wild Mark to all enemy targets below it for 15 sec.
While the Wild Spirit is active, each damaging ability you use against a target affected by the Wild Mark calls forth a spirit beast to strike your target for [45% of Attack power] Nature damage.

Paladin | Blessing of the Seasons
Instant
Bless your party members with the aspect of one of the seasons, lasting 1 minute or until you advance to the next season. 15 second cooldown.

Priest | Fae Blessings
2% of base mana, Instant, 1.5 min cooldown
Surround yourself with helpful sprites, causing your next 10 spell casts to aid your target depending on your chosen spell.

Shaman | Fae Transfusion
40 yd, 3 sec cast, 2 min cooldown
Transfers the life force of up to 8 enemies in the targeted area, dealing [25% of Spell power and 25% of Attack power] Nature damage every 0.5 sec for 3 seconds.
Pressing Fae Transfusion again within 20 seconds will release 25% of all damage from Fae Transfusion, healing up to 8 allies near yourself.

Warlock | Soul Rot
40 yd, 1.5 sec cast, 1 min cooldown
Wither away all life force of your current target and up to 3 additional targets nearby, causing them to suffer [100% of Spell power] Nature damage over 8 sec.
For the next 8 sec, casting Drain Life will cause you to also Drain Life from any enemy affected by your Soul Rot, and Drain Life will not consume any mana.
Consumes 20% of maximum health when cast.