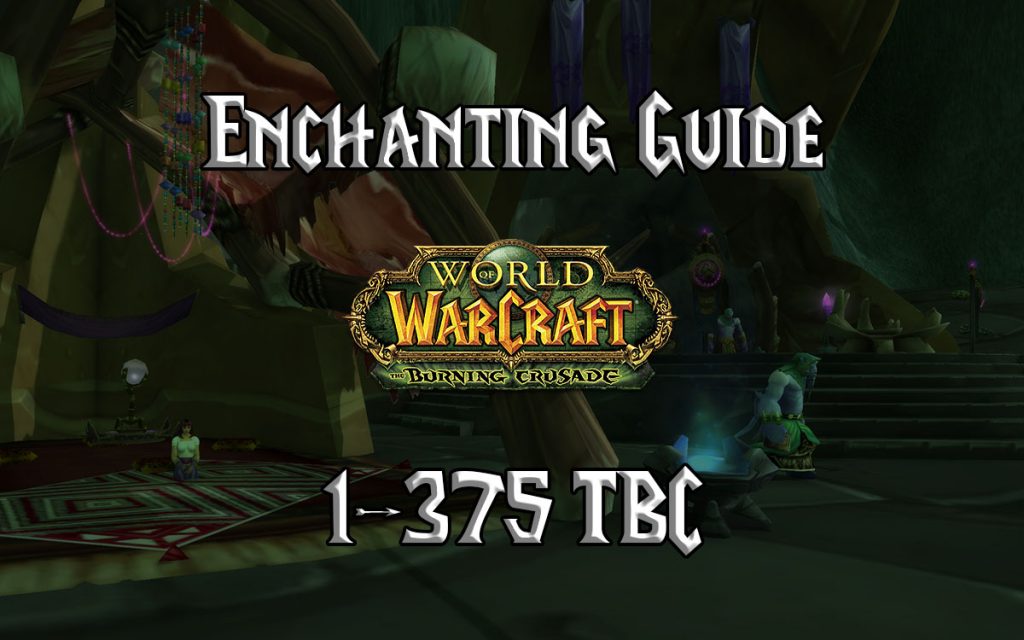 Enchanting is the practice of adding buffs to weapons and gear. In WoW Enchanting is vital for endgame PvE and PvP, and as you level, it can give your gear an edge to make the process a bit easier. Enchanters get the materials to create these by using their most important skill: Disenchant. This spell allows players to transform gear of any level -- with at least Uncommon quality -- into various dusts, essences, and crystals. But, beware! The gear is destroyed in the process. At a high level, Enchanters’ can add buffs like Enchant Gloves - Threat, Enchant Weapon - Executioner, and Enchant Boots - Surefooted.

Enchanting is unique in that there is no explicit gathering profession that players usually pair with it. Instead, most Enchanters opt to train Tailoring alongside Enchanting, so that they’re able to create extra gear to disenchant. Because of this pairing, Enchanting is most highly recommended for Cloth armor wearers of all specs, but all players can become Enchanters, regardless of if they choose that or not.

Beginning in Patch 2.3, Blizzard changed most profession trainers -- including Enchanting -- to streamline the leveling process. As a result, you can learn Enchanting from Apprentice through Artisan from a trainer in any major capital.

After you cross through the Dark Portal, your Master Enchanting trainer will be in your faction’s first questing area in Hellfire Peninsula. For the Alliance, this is Johan Barnes at Honor Hold, and for the Horde, Felannia in Thrallmar will do the same.

All players also have the opportunity to learn from two neutral trainers: High Enchanter Bardolan of the Scryers in Shattrath and Asarnan of the Consortium at Stormspire in Netherstorm. Neither of these offers any different recipes from the other, so you are free to choose whichever suits your needs.

* = Optional, based on choices

2 - 50: Disenchant any green items you have on hand

Whichever option you end up choosing, once you reach skill level 75, return to your trainer and learn Journeyman Enchanting.

Any time after you reach skill level 125 while enchanting the shields, you should learn Expert Enchanting.

Between 250 and 270, you have the choice between making two different things: a bracer enchant or Lesser Mana Oil. If you are leveling naturally in Silithus, or are otherwise near it, it is advantageous to pick up Formula: Lesser Mana Oil from Kania in Cenarion Hold, as it will save you a solid number of Dream Dust. If not, then making Enchant Bracer - Greater Strength is perfectly acceptable as well.

Before continuing on, you’ll need to purchase Formula: Enchant Shield - Greater Stamina. Luckily, this recipe is sold by trade supplies vendors in major capitals, so finding it is relatively painless. It’s sold to the Alliance by Mythrin’dir in Darnassus, and the Horde can purchase it from Daniel Bartlett in Undercity.

This is also a great time to pause and purchase Formula: Runed Arcanite Rod and Formula: Enchant Cloak - Superior Defense from Lorelae Wintersong at Nighthaven in Moonglade.

After completing the cloak enchants, it’s time to head through the Dark Portal and become a Master Enchanter!

This is also a good time to go find Formula: Runed Adamantite Rod, which is sold by faction specific vendors. The Alliance will need to head back to Hellfire Peninsula and find Vodesiin at the Temple of Telhamat, and the Horde can stay in Terokkar Forest and head over to Stonebreaker Hold to speak with Rungor.

Congratulations! After you’ve finished with the ring enchants, you’ve capped. Keep reading to find out about the myriad Reputation based and BoP recipes available to you.

Beginning at skill level 350, there are a number of powerful Enchanting recipes that you’re able to learn. While most require a complete 375, all are still valuable and highly sought after additions to your spellbook. These recipes break down into two categories: Reputation Rewards and BoP drops from mobs. The reputation rewards are broken down by faction and necessary reputation level below.

The BoP recipes are a bit trickier. Some are dropped from specific bosses in raids and dungeons, and others are dropped by mobs in those some raids and dungeons. A third set are world drops and come from mobs in certain zones. Each is explained, but click through to find out which areas the mobs are in and where to farm them.

After completing the cloak enchants, it’s time to head through the Dark Portal and become a Master Alchemist!

Is there any macro for leveling enchanting? So annoying to click all the time

Keybind that, open your Enchanting window, and hover over the item you're looking to enchant, and just repeatedly press your keybind.

I tested this on Beta, and it worked.

Enchant Bracer - Minor Health is one of the three enchants included in your skillset immediately upon learning Enchanting. You can use this to get to 75 (It becomes Yellow at 70, but doesn't turn green until after 75)

There is an Enchant Chest - Minor Health, but that is learned at 15, and while requiring the same reagents as the above enchant, it too becomes Yellow at around 70.

I have confirmed on Beta that Enchant Bracer - Assault requires 300 enchanting and can be learned from a few different NPCs.

Enchant boots - dexterity is not on the bop list, and it drops in AC

How does enchanting Lesser Mana oil save "a solid number of Dream Dust" over Enchant Bracer - Greater Strength? Lesser mana oil consumes one more DD than Greater strength does.

The guide is very basic, and in many cases will cost you a lot more money than you would have to spend if you don't use the guide but take a minute to figure things out. I'll give a couple examples:
-Leveling 10-150 can literally be done by using Magic Essences and making wands, then auctioning or vendoring them. If the mats on the ah are below 5s for lesser or 15s for major, you break even. If less you even make a profit.
-You are recommended according to this guide to swap off of enchant bracer, strength at 205. It turns yellow and costs 1 dust. the recommended enchant costs 3 dust. Yellow 1 dust levels way better than orange 3 dust.

There's many others to be fair. I wouldn't use this guide unless you have infinite gold to spend, in which case, why use one anyway?