Skip to content
Forums
WoW Classic
PvP
Did you guys have f...

Did you guys have fun with the world boss event the other night?

We all thought it was midnight EU time so all of the Horde and Alliance guilds gathered at the world boss spawns just to find out it was more like 2am!

Still, we had a lot of fun wiping some Alliance raids!

I went to bed not long after but Horde got the Ashenvale kill, not sure about the others.

How'd you guys get on?

We tried to kill a world boss out in northeast Ashenvale, but more than 80 horde rolled up and we didn't see an opening. So we left for Duskwood and tried to get a shot at Lethon. As we arrived, Spy showed a couple full horde raids pulling up at the same time 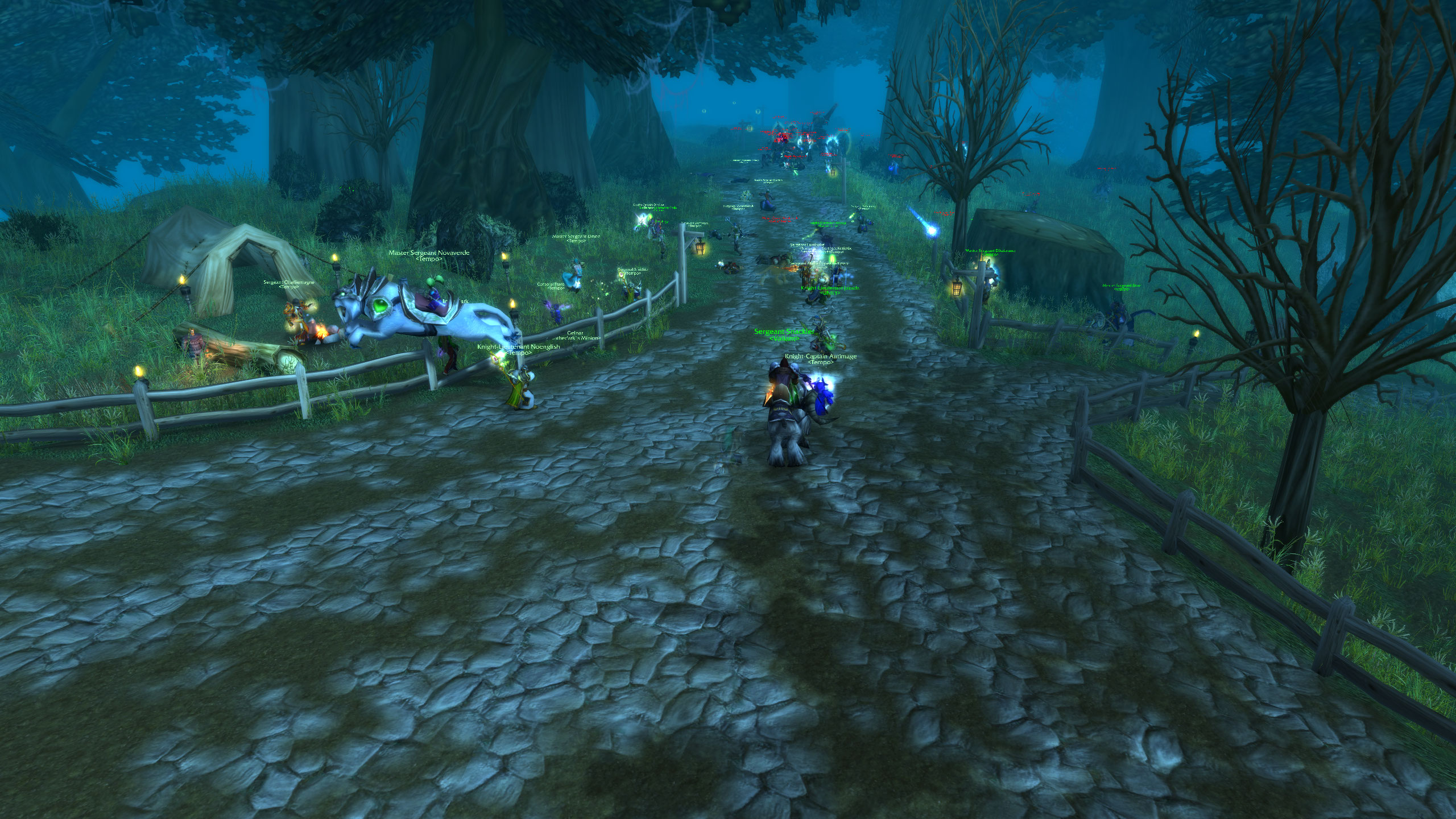 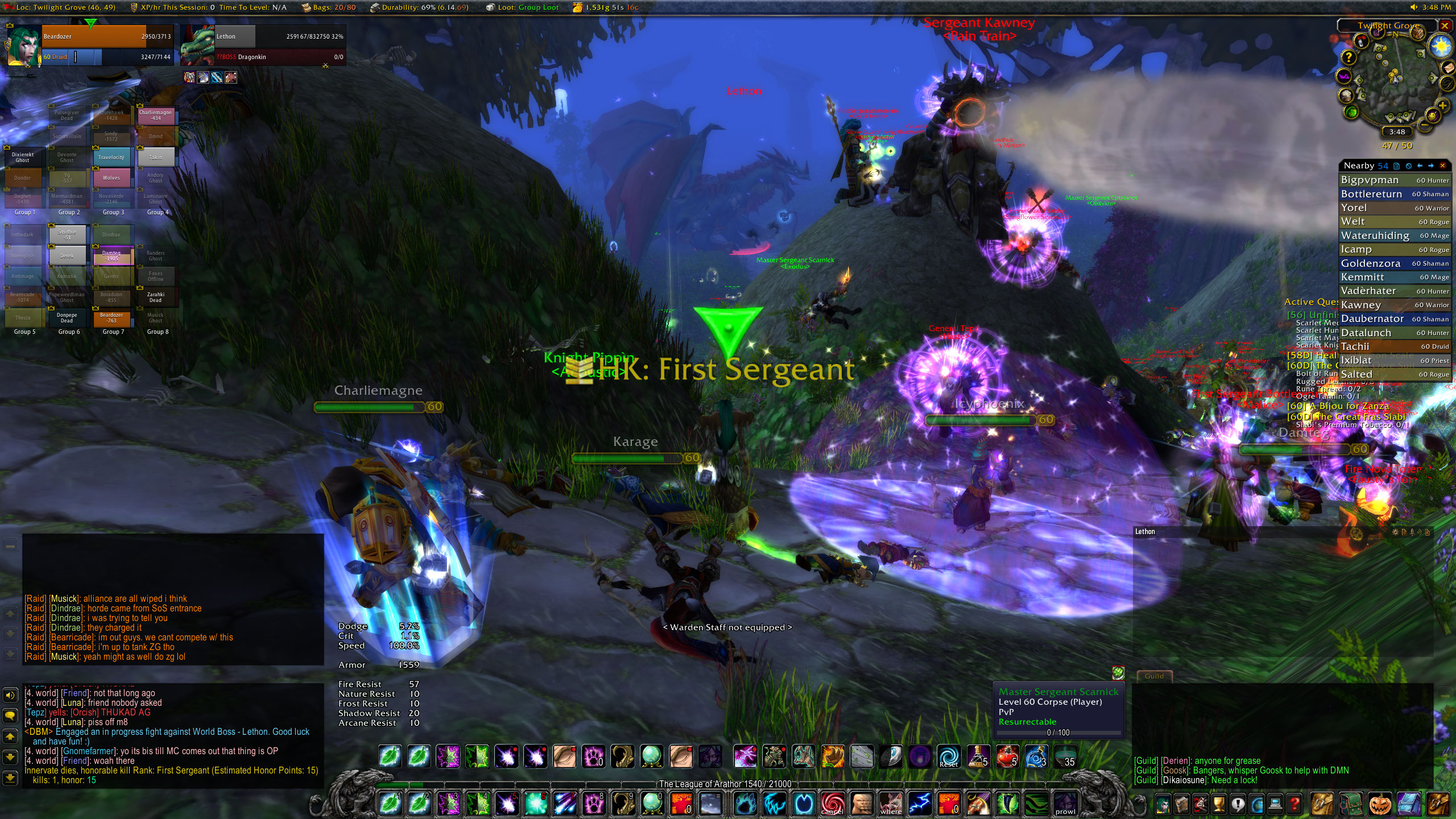 Dead bodies everywhere as horde, alliance, and Lethon all fought each other 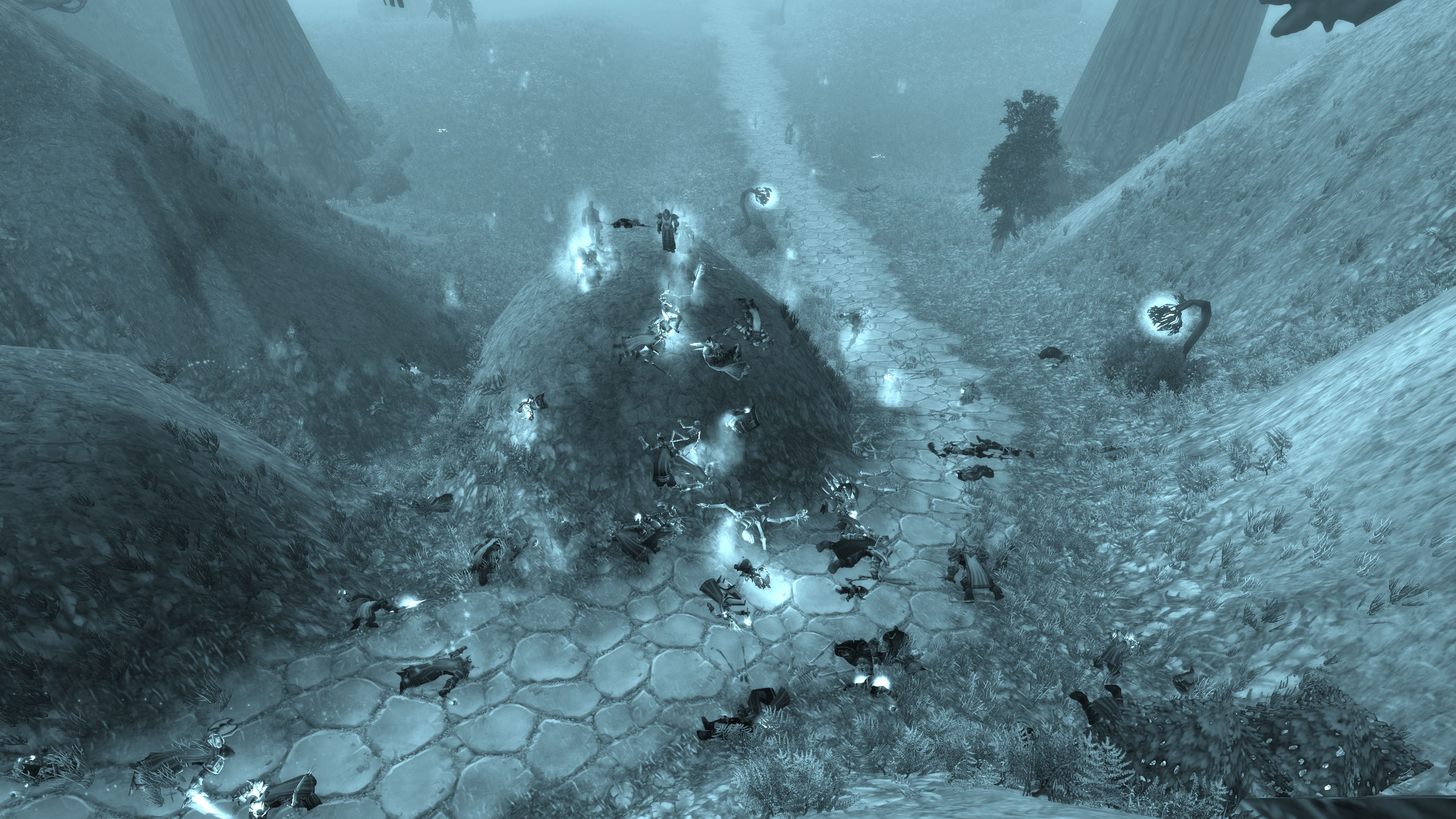 A group of alliance was able to secure the Lethon kill. This event was a fun clusterfuck.

How long was Emeriss up on your server? I'm not sure if he's gone down yet even on mine. Emeriss was up for at least 3-4 days if he's not still up now.

A group of alliance was able to secure the Lethon kill. This event was a fun clusterfuck.

How long was Emeriss up on your server? I'm not sure if he's gone down yet even on mine. Emeriss was up for at least 3-4 days if he's not still up now.

Love it! Stuff like this isn't even about getting the kill, it's just fun to be there and witness the chaos.

As far as I know they all went down the same night, there's a pretty active world boss discord set up on both Horde and Alliance.

Our world boss night was epic but it requires a bit of backstory.

I originally gathered all of the Horde guilds for Azuregos and Kazzak and organized the first Coalition on my realm. All guilds except this one guild - which also happened to be one of the largest on my realm, let's call it X - joined. This guild showed up for Kazzak and pulled and we decided to cover them while the Alliance was pushing behind and we helped them kill Kazzak.

However, after that the X guild still didn't want to join us, demanding that we remove more than half of the other "smaller" guilds in order to work with them. I told them to fuck off and ever since then, they've tried contesting World Bosses on their own and we just let the Alliance wipe them.

Horde had total and complete domination on the World Bosses until, about a month later, the Alliance on Flamelash decided to transfer to our server.

We were taken by surprise by this move and lost the next Kazzak after they transferred but quickly picked up the slack and mobilized our forces.
A lot of Horde - albeit not as many - also transferred alongside the Alliance and they came with a Coalition of their own. I went to them to tell them what the World Boss situation was on our realm, how we did the bosses and split the loot and, of course, to invite them in. They told me that they would think about it and get back to me.

Days later they decided to join with X guild and contest alongside them. They never got back to me so I took it as a cheeky move on their behalf. On the next Kazzak, we killed the Alliance summoners and we met there in the field. We had half our raids suicide into them while the other half took the boss and killed it. Needless to say, they were mad about it but we didn't care - we weren't going to bring 20 guilds there so that they could have the loot, and if they weren't with us, they were against us. For another month we maintained our dominance on the World Bosses while these guys were trying to stay on the side to pull a boss and try to do it while we were busy fighting, but they never really succeeded in that.

About a month later though, more guilds transferred and Alliance all banded together. Around the same time, our rankers were busy ranking and we lost interest in the loot from those bosses. We decided to stop contesting and since my guild made up about one third of the group that went there to contest them, our Coalition slowly died off.

We maintained a strong presence in WPvP but sadly, Alliance outnumbered us and I knew that unless all the Horde was going to band together, we weren't even going to touch on any World Boss.

So a week before the launch of the dragons, I sent word out to every officer and GM of the other coalition that if they were willing to put drama aside, we could work together and contest world bosses. However, due to the fact that they held a grudge over what I did in the past, they refused to answer me. They took a few guilds from my old coalition and settled for that - my guild on the other hand, with two raiding teams, with a huge WPvP presence and experience doing world bosses as well as good intel on the Alliance was not included because of drama that happened in the past.

So I set in motion a plan to achieve a long-standing goal of ours...

We're known for our dedication to WPvP on the realm - and once Alliance figured out what we were up to, they consistently denied our attempts to kill Magni Bronzebeard before P2 was launched.

The spy addon picked up all of our summoners in Ironforge, and there were guilds on the realm dedicated to defending Magni Bronzebeard as a symbol of the Alliance's strength on the server.

But I knew that if there was one moment in time to kill Magni Bronzebeard on that Horde forsaken realm, it was going to be on the launch night of Dragons of Nightmare. I got a raid together at about 11:00 PM and we went into Searing Gorge to suicide and enter ghost form. We walked through the gates in Searing Gorge and entered Stormwind as ghosts. We discovered that, if you walk in as a ghost into the Deeprun Tram, you will ressurect on the other side of the portal. We timed everything so that we would be able to kill Magni Bronzebeard minutes before midnight in order to either provoke them to come back and defend him - which would give Horde a chance at a world boss, or allow us to score this symbolic victory against them.

Fortunately for us, they did not move back to defend. At midnight we killed Magni Bronzebeard and the Alliance were absolutely mad about it. Having one raid team ready though, we decided we should go for a world boss just for the fun of it and we went over to Hinterlands with 50 players.

Once we got there we encountered three Alliance raids getting ready to pull the boss. We wiped their PvP group and forced their PvE group to move back and assist, which meant that they couldn't contest the boss anymore. We resigned with the fact that we were outnumbered and weren't going to get a kill on the boss, but at that point we were glad to be there just to screw with them.

The Horde Coalition eventually lost against the main Alliance Coalition at Ashenvale and, after hearing that our raid was in Hinterlands, decided to go for that dragon.

At the climax of this battle, we were surrounded by 300 Horde characters that hated our guts and 600 Alliance in front of us that wanted all of us dead. As they moved to charge in, I gave the order to my tank and he pulled Emerriss into the raid group. Minutes later, we had 1000 mushrooms laying ahead of us.

The Horde were so mad that they portaled out immediately and cursed our guts. Alliance left 3 raids behind and went after them. With 50 people we defended Emeriss for 2 hours straight and our dragon was the last to fall, not before they brought their entire 600 group to kill it.

The Alliance congratulated us for killing Magni Bronzebeard and for pulling this stunt, and I'm glad we managed to teach them a lesson.

I like this game very much .This is the most cool game i ever played in my life..

I think the best part about the world dragons are how ridiculous of an effort must be made to get a tag and a kill and get a piece of loot from them. The fact that you can have so many full raid groups on both sides griefing each other into oblivion until the last team standing wins by sheer attrition is pretty special.

Nymis that’s a tale to tell the grandkids hahaha