Shadowlands Alpha is here and there are a few new surprises.

While the release date for World of Warcraft: Shadowlands isn’t until later this summer, invites for the Alpha release are being sent out now.  This not only means that some players will be able to glean some of the amazing new content, but also that players will be able to datamine the expansion to learn even more new features that Blizzard as not yet talked about.

Ion Hazzikostas, Game Director for Shadowlands, announced recently in a blog post, that the closed Alpha was live and offered some tidbits on what those lucky enough to get the invite with encounter when they start playing.  Shadowlands is still in development, so even the Alphas will only have access to the starting zone and first dungeon, Bastion and The Necrotic Wake respectively.

One of the more talked about aspects of the Shadowlands expansion is the level squish coming along with it.  Because of the widespread changes to leveling, a squish was likely inevitable, and many players will find themselves wondering what their alt character’s new levels will be once it’s implemented.  Fortunately, Blizzard has given a good indication of what that level will be.  For any players at max level, as of Battle for Azeroth, the new level for their characters will be right at 50, as the new max level with Shadowlands is 50.

Item levels will also be a part of the squish and players with top tier gear from Battle for Azeroth (Mythic Uldir), or (Mythic Nya’lotha) will find their new gear levels at 66 and 130/140 respectively.

Probably Shadowlands most noticeable and anticipated feature will be that players will be able to learn to ride ground and flying mounts at much lower levels.  Riding will be unlocked upon character creation and the flying skill will be learned by non-hero characters at level 25.  Death Knights and Demon Hunters will learn flying automatically upon character creation, as they will be starting at level 8.  Allied races will also be able to fly at the point of creation at level 10.  This will allow players starting new characters to move much more swiftly throughout the world and will make leveling new characters a lot easier as well.  The cost of learning base level flying has also been reduced significantly to a mere 237 gold.  This, coupled with access to flying mounts via account, might draw back in some players that have been away from Azeroth for a time.

One interesting and potentially helpful new feature is a small one that most players might overlook.  For its almost twenty year run, WoW has always used the same quest marker icons.  Namely a yellow exclamation point for an available quest and a question mark for a quest that is ready to turn in – with the occasional light blue transparent punctuation being used for quests that are repeatable.  Shadowlands introduces what Blizzard calls Campaign “Banners” which indicate that a given quest is part of the main storyline. 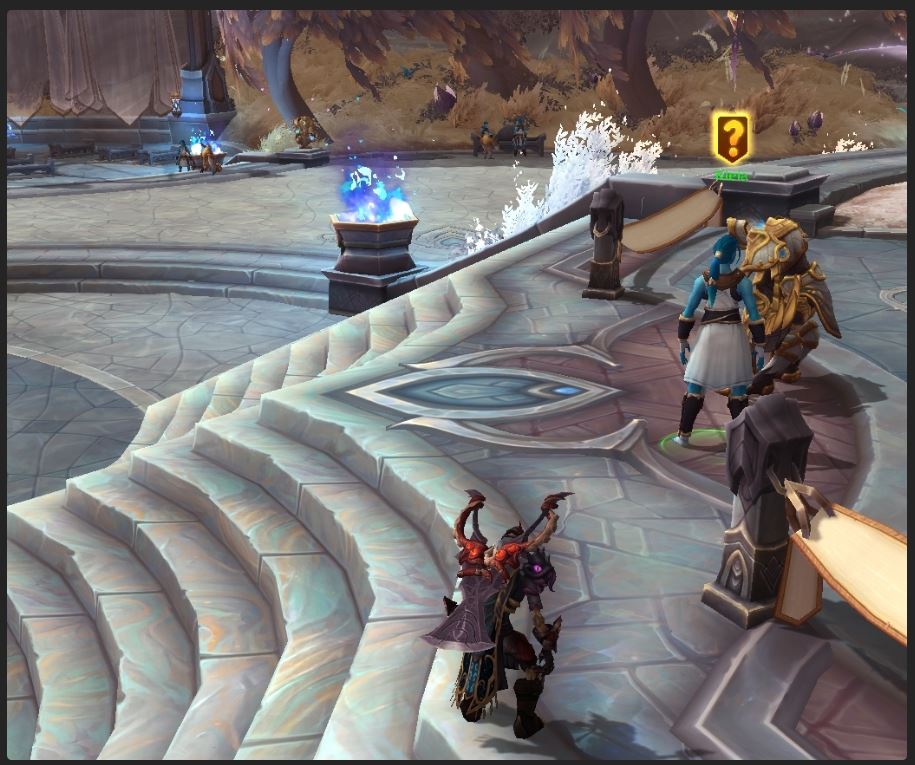 Players will be able to differentiate between storyline quests and side quests with the former having a small shield just behind the quest marker.  This subtle, but noticeable new addition will be helpful both to veteran players who just want to burn through the story in a given zone as quickly as possible, as well as new players who might want to take their time here and there.

Another new feature is the addition of map markers that players can place themselves onto their in game map.  Not only will players be able to mark locations on their own map to keep their bearings, but they can now ping the marker to indicate an exact location everyone in their group.  This will be an invaluable new tool for everyone from the most casual weekend warrior, to the most dedicated raid leader.

It will also simply help with general navigation and directions, but also in saving players time.  If they know that there’s another location to stop on a quest circuit of a given zone that doesn’t have a quest associated with it – like a spot where they know they can grab a specific resource, or where there’s a random vendor to unload trash – they can simply place their own marker there and add it to their journey.

There’s sure to be more new features discovered as the Alpha roles out, hopefully most of them will be as helpful as these seem like they will be.  For now, we’ll just have to wait and see what the Alpha players and data miners discover over the next few months until the official release.