Amongst several other changes coming in 9.1.5, such as Covenant Campaign skips and additional ways to streamline alt character experiences, the World of Warcraft Twitter account has revealed ‘Legendary Item Recycling.’ While there is no other context to this, it is a reasonable thing to expect of patch 9.1.5, especially when Blizzard seems to be trying to fit as many player friendly changes into this midpoint patch. This could mean anything from recycling soul ash, recycling the crafted legendary item itself, or some form of direct transition between legendaries. It is hard to guess based on so little, but hopefully it will ease the impact of nerfs or spec changes for players who don’t enjoy Torghast, or don’t have enough gold to supplement multiple playstyles needed for their specs.

World of Warcraft
@Warcraft
Replying to
@Warcraft
Here’s a look at the next few months ahead. https://worldofwarcraft.com/en-us/news/23716422/915-content-update-preview 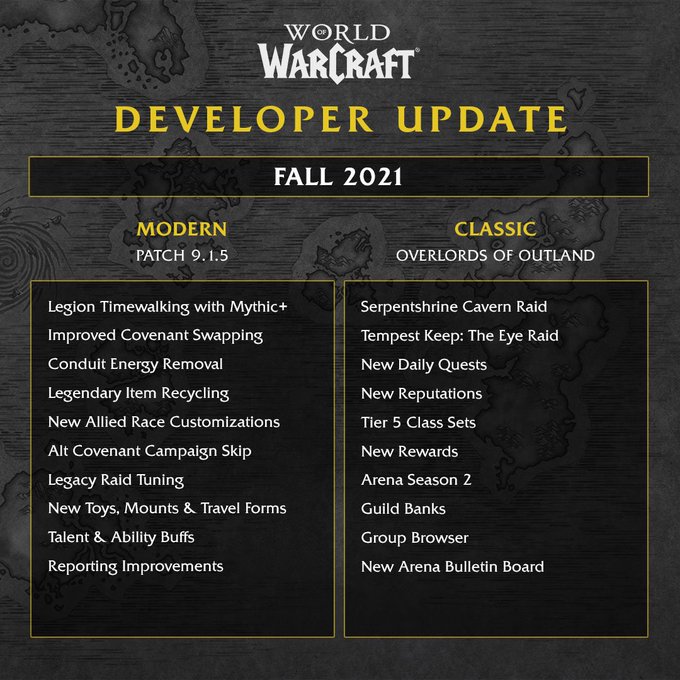 A long time World of Warcraft player and MOBA enthusiast. Lately more of the former than the latter.
Subscribe
0 Comments
Inline Feedbacks
View all comments