After what felt like an impossibly long test period and pre-release time, World of Warcraft’s Legion has finally been released. Now, I deliberately didn’t play too much on the beta test purely because I believe that the true experience of a game should always be when it goes live, and not based on a watered down buggy version of a pre-release.

Having said that, I certainly played the hell out of my new female Blood Elf Demon Hunter in pre-release, and managed to increase most of her professions to 600 which is the real ball-breaking stuff.

Anyway, I’ve played a few hours of Legion now and I wanted to share with you some of the instant impressions I got with the game. So, without further ado…

The introductions are a fantastic introduction to the new Legion expansion. An instanced style assault on the Burning Isles and a huge invading force of demons, lead by Azeroth’s number one bad guy Gul’dan. I’m not going into too much detail because, you know, spoilers. However, I will say that you need to see both sides of the battle, from an Alliance and the Horde side. Watch them; you’ll see what I mean.

In Legion, it looks as if professions have had a little love. Not a complete overall unfortunately, the structure of leveling them up remains pretty much the same. There are some notable changes, however. I’m a Skinner / Leatherworker with my main, and found that very soon I was given leatherworking and skinning quests from the trainers. These quests not only unlocked the various patterns for leather and mail, but also unlocked skinning skill increases that increase the success rate of skinning creatures and the amount of leather/scales you get from them. I’m hoping that end game is filled with high level quests and rare recipes, but even if not at least the grind to max level profession isn’t as dull as it used to be.

Obviously, in the rather limited amount of play I’ve had with Legion I haven’t leveled my artifact weapon up to its godly top. However even at a low-level some things are pretty clear. In regards to each artifact weapon, there isn’t a large amount of customisation options. For example, the artifact trees for when the weapons power up, only really have one a handful of options, and even more disappointing was the visual customisation. At this stage it looks like there are four different overall looks for each weapon, unlocked by completing various tasks and each of those have 4 different colour schemes. I wanted a lot more customisation options in here, such as for a rifle, being able to choose, hilt, barrel and animation style and colour, so that you can feel your weapon is truly unique. As it stands now, I imagine many artifact weapons are going to look the same as a great many other people. Hopefully, they’ll look at this in future patches. 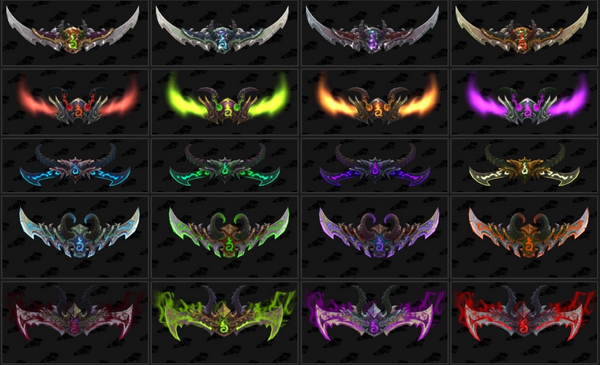 Class Halls are the big selling point of Legion, well those and Demon Hunters. Blizzard have looked into the Garrisons of WoD and have tried to take what worked and dumped what didn’t. So you can still recruit followers and send them on quests either for class hall resources or for XP, and artifact points for yourself. I have to say, the feel of the class halls is kinda nice, in my case all the hunters of Azeroth mingling and socialising (Well, ok not literally socialising, but they’re in the same building and not killing each other so it’s a start. At low-level, at least, it’s not a place you spend very long at, you go there sort out your follower quests and recruit any squads or units you need to. It’s a long way from wanting to share a brew with your fellow hunters and talk about old times. Though, maybe end game is different. I’d like to see some class only, dungeons, scenarios and raids but I can’t see that happening.

…. plus a load more of course.

There is a lot more to Legion than the above, such as the dungeons, Demon Hunters, new class animations, the re-vamp of inscription, mechanical pets, but the above I thought deserved special consideration as the bits that have stood out the most in Legion.

I’ve been playing WoW for too long to throw out a review straight upon a new expansions release. These things have to be played a lot and left to bubble around, until the wrapping paper falls off. So stay tuned for the full Legion review, and then I’ll really let you know what I think of it.