Blizzard needs to fix layering before the WoW Classic launch

With the final stress test for World of Warcraft Classic about to wrap up tomorrow there are ongoing reports from players about layering not working the way Blizzard stated that it would. Cities are emptier than our checking accounts after a Steam sale and there are not enough people on the layers to get duels going in Goldshire or outside the city gates. About the only place you’ll actually see that there is a lot of activity is in chat.

Blizzard, we get it, you think 90% of the playerbase is going to quit WoW Classic within a couple of months, but what you are doing is creating a solution that is worse than the problem.

So let’s make a toon and see what it looks like in game.

Currently if you look at the realm selection for the stress test here in the US you’ll see three options:

So when we create a character and login to Barov we expect to see a serious amount of people but what we actually see is 10-20 players getting started. 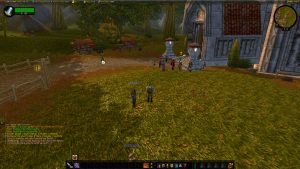 Okay, well maybe there are so many people online we’re put into one of the layers so that it’s a smooth play through instead of waiting 20 minutes to kill each quest mob. After all that was part of the intent with layering (along with accounting for players who play a couple of weeks then never play again resulting in empty servers to merge). Running around Northshire Abby we see more people, but we could still get our quest mobs with no issues. It’s active but not crazy overpopulated thanks to the layering.

Let’s go for a stroll and check out Goldshire, see how it looks!

Probably another 20-30 people in and around Goldshire, nothing crazy. No group of players dueling like you’d expect to see and could take part of.

One of the big draws of WoW Classic is the community. With all of these players on other layers it doesn’t feel like a “High Population” server where there are activities to join in all the time.

Maybe if we go into Stormwind to check it out it’ll be like old times.

Stormwind on this “High Population” realm is even more dead than retail, which is saying something. In Vanilla, and now in Classic, I’d expect to see people standing on boxes (and fountains) trying to sell shit, giving away low level enchants, stripper Night Elves on the mailboxes… you know, the usual. Instead it’s just an empty city.

Let’s continue on to Ironforge!

On my server back in Vanilla WoW Ironforge was the most populated city for the alliance. It was so populated in fact that if some of my friends would lag out and be disconnected unless they zoomed their camera all the way in and pointed it at the ground. After all, just check out the screenshot from _DOGZILLA_ that was posted on reddit a couple years ago.

Surely an official server during a high population stress test will have a shit load of people?

If I'm not working or spending time with the family I'm probably gaming. Some of my favorite recent games I've played are Far Cry 5, World of Warcraft Classic, and 7 Days to Die.
Subscribe
24 Comments
Most Voted
Newest Oldest
Inline Feedbacks
View all comments

To be fair, during the stress test most people are out in the world playing the game. With no permanent characters, nobody is focusing heavily on tradeskills, or building up the economy, which is already largely non-existent due to people spending all their silver on class abilities. The layering in cities might be too extreme, but this isn’t great evidence of that, we’ll need to wait and see when the game goes live if we get the same results we do right now.

I’m going to assume you did a /who on the cities to confirm actual numbers of players in those zones, right? If so, that would be a great piece of evidence to include as you could say “Hey, there are 150 players in Stormwind but I can’t see any of them!”.

This was 2 cities, 1 starting zone, and 1 quest hub. All of them had very small amounts of players. Additionally CensusPlus showed about 4k players on Alliance side. There is plenty of evidence of issues with layering during the stress test so far.

Also not in the screenshots are similar issues except when I made a Dwarf Hunter, same realm except on day 1 of the stress test.

/who
SIXTY PEOPLE
WHERE ARE THEY? LAYERED.
IS THIS THE VANILLA EXPERIENCE? NO.

Last edited by FUCK YOU
-28
Reply

My starting zones had hundreds of people.. couldnt kill anything or quest…..

I should have taken some pictures. The starting zone I logged into was overflowing with players. So many that questing at low level was impossible.

I’m by no means a Blizz defending fangirl, but I like to be fair. And I don’t think this article is entirely fair.
Yes, the cities and towns shown in this article are pretty empty. Actually they seem dead… You got it right there. However, this layering will not be permanent. According to Blizz, it’s just a temporary state to smoothen over the launch itself where all players will need to be stuck in two zones. It won’t be like this always, so I think it’s acceptable to have it for the first week or so just so we aren’t, as you wrote, waiting 20 minutes to kill one mob.
This is just anecdotal experience, so other people may have a different one, but when playing this last stress test, I saw crazy amounts of people. So much so that people actually formed a line to wait and kill a quest mob 😀
Also, comparing Itonforge with the shutdown of Nostalrius really is not fair. Almost the entire server accumulated in main cities for the shutdown, of course a live game or a stress test will not be like that. People were mainly just messing around, nobody was actually sitting in cities, which they will do in the live game as they have permanent characters.

I played horde and it was full, it was very fun.

Were we playing the same game? This was goldshire just before server shutdown today 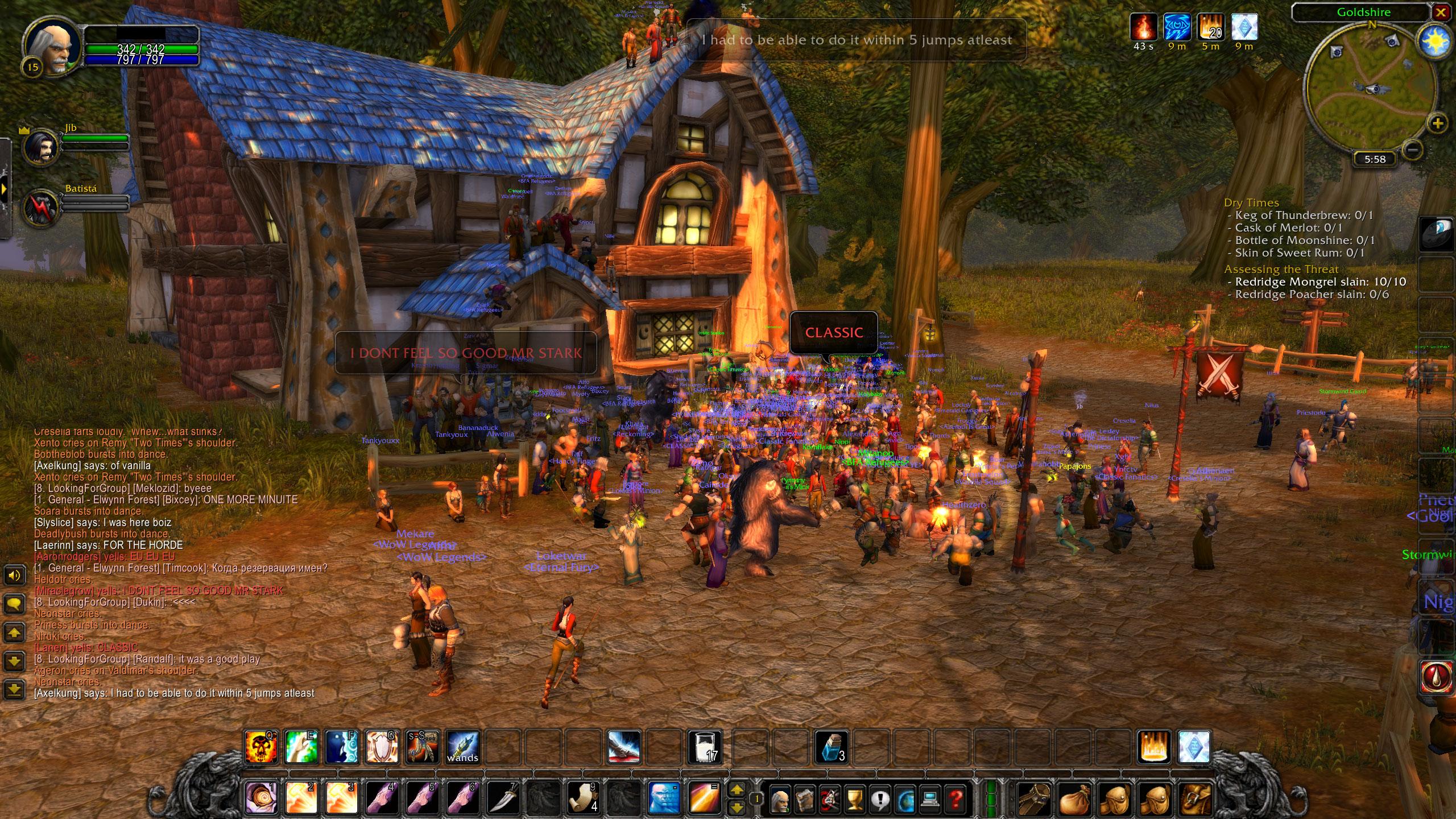 When was this? I played during the last final stress test on August 8th and Northshore and goldshire was completely filled up entirely could not tag a mob for shit. And I played on oceanic medium pop, cuz the 2 us servers were “locked” population

There was hundreds of players at every starting zone though. Not at the damn city…

Horde had 150+ raid on goldshire last night it waa the most fun i have ever had in wow.

Which unitframes is he using?

Some players have a great experience, some have a bad layer and end up with a bad experience. We’re hoping that this is a result of Blizzard testing things and not an accurate reflection of what it will be at launch. Either way we’ll find out on the 26th.

Why can’t we just find out now? Why can’t they just COMMUNICATE with the community and tell us if this is how it should work at launch or not? Wtf.

We Need Nostalrius.
it was a good game
Classic is sh1t….

Oh they extended the stress test to over the weekend, I only played the first 3 hours they released it, perhaps they changed and added it in more severely after the 3 hours I played

Should’ve seen orc starting zone. There was one player per mob. Took me 5 hours to finish the area on thursday.

We were playing the same game, but on different layers.

Hey Keyom, there are screenshots of starting zones in the article with the same issue. Some people get good layers, but unfortunately a lot of people get empty layers also.

WOW NICE COMMENT HTML CODING MORONS
CLEARLY I SAID
/who [any major city]
NOT FUCKING /WHO IN THE ENTIRE SERVER.
WAY TO MAKE ME LOOK STUPID.

Last edited by FUCK YOU
-19
Reply