Is anybody here going for it?

We've been talking about this in my raid team for a while and have always had an idea to put in a bid for this thing. With today's announcement of Phase 5's July 28th release date, we are committing to it. We are the largest Alliance guild on the server, with 600 members, probably about 200 of them regularly online and active, 3 full raid teams, and 4 or 5(can't remember) Rank-14 players who know what a grind looks like. The largest horde guild on the server also disbanded a couple of weeks ago, adding some chaos to their side. My group is in a good position to get it done. We plan to grab whoever can make it from all 3 of our raid teams to hit BWL immediately after the Tuesday server reset to get a jump on the process and start getting people deputized. I am not the chosen one, but am committing to take time off work and put in the hours and see where we can get. We've chosen our raid leader to carry the banner for us.

Is anybody else putting in a serious bid for this as well? What are your guys' plans if so?

I'm certainly not going for it, that would be awesome to see someone from BC get it though!

Good luck to your team!

I certainly won't be able to go for it but wish I could.

So, in Classic you'll end up with the mount only and no title until TBC is that right?

You gonna go for it yourself Caperfin? Or are you chipping in to help somebody else?

We got our 10AM BWL in this morning and got broodlord's head. I went back to work after, but most of the squad is out there grinding bugs now. It's going to be an intense next several days of very little sleep. We're going to see if we can keep up and get this bug mount for our raid leader.

The start of insanity begins...

Yeah, it's feeling pretty insane. We're finally past the 25% mark, and are on pace to finish the rep grind in the next ~10-14 days or so. Luckily, our server's war effort mats are trending towards needing another 14-21 days to finish, which puts us on pace to get the rep done in time. If we can keep up our current pace, as slow as it is, we are on track to get this done. Barring any rapid increase to war effort mat completion that is...

One in our guild is doing it and we are helping where we can. Thankfully for him our war effort is gonna take a while.

Guildie is going for it, I've been helping where I can but I'm already burning out from the honor grind so farming elites in Silithus in heal spec is rough. We have some time though by the looks of it so we should be fine.
I just have to think how cool it'll be when someone from our guild is up there on the steps ringing that gong! 😀

We finished the rep grind part of the quest chain today. It took us two full weeks to get here. We had upwards of 15-20 people online and grinding at any given time, but also had a lot of time invested during the middle of the night by a good chunk of our guys. The grind started extremely slow, only netting a few thousand rep the first few days. However, we were keeping an eye on the war effort materials and saw that we had headroom to work. We somehow rallied over the past two days, pulling in 13k rep to finish it off. I was expecting this to take another week, but the competition for tags lessened with time and we were able to secure entire cave systems to ourselves. 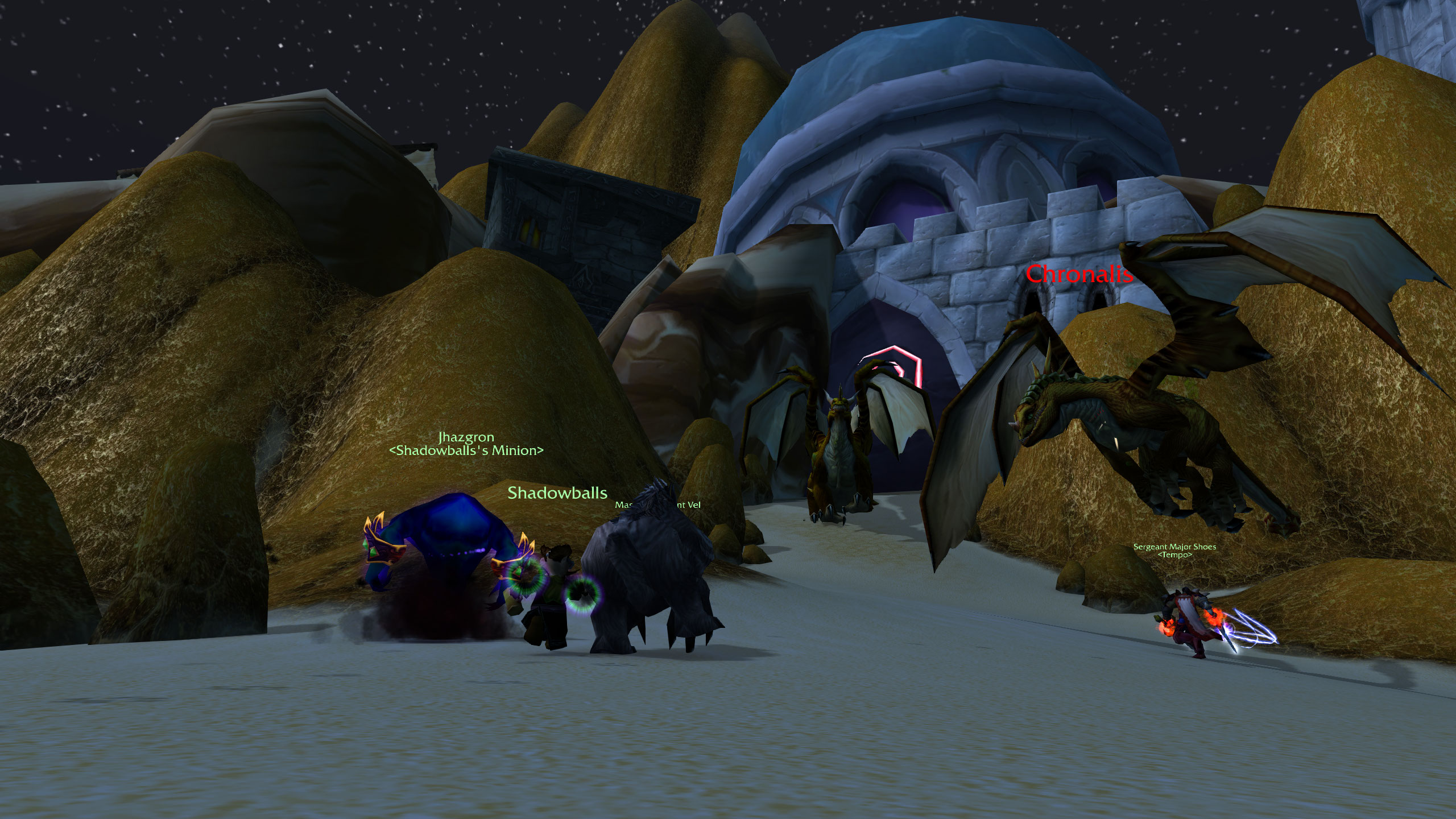 The war effort on Fairbanks remains around 75% complete.

We move onwards towards the scepter shard fragment part of the quest chain.

Our second scarab lord contender finished his rep today too. We got two guys through, 84,000 rep in total.

We worked on the green scepter chain today. I was worried about the Ashenvale fragment. There were a lot of reports of this taking guilds entire days to get through because of the poor respawn timers and low number of dragonkin spawns in the area. We got the Ashenvale shard on the 3rd kill. We got the Hinterland's shard pretty quickly too. Funny enough, the Feralas shard took the longest to pick up. The zone had the largest area, the most spawns, and it still took us the longest due to poor RNG.

We ran into horde in Feralas. They had more than we did, but we all decided not to waste each others time and brokered a peace treaty. The resulting 47 player combined alliance-horde deathball that rolled through the dragonkin was a lot of fun. 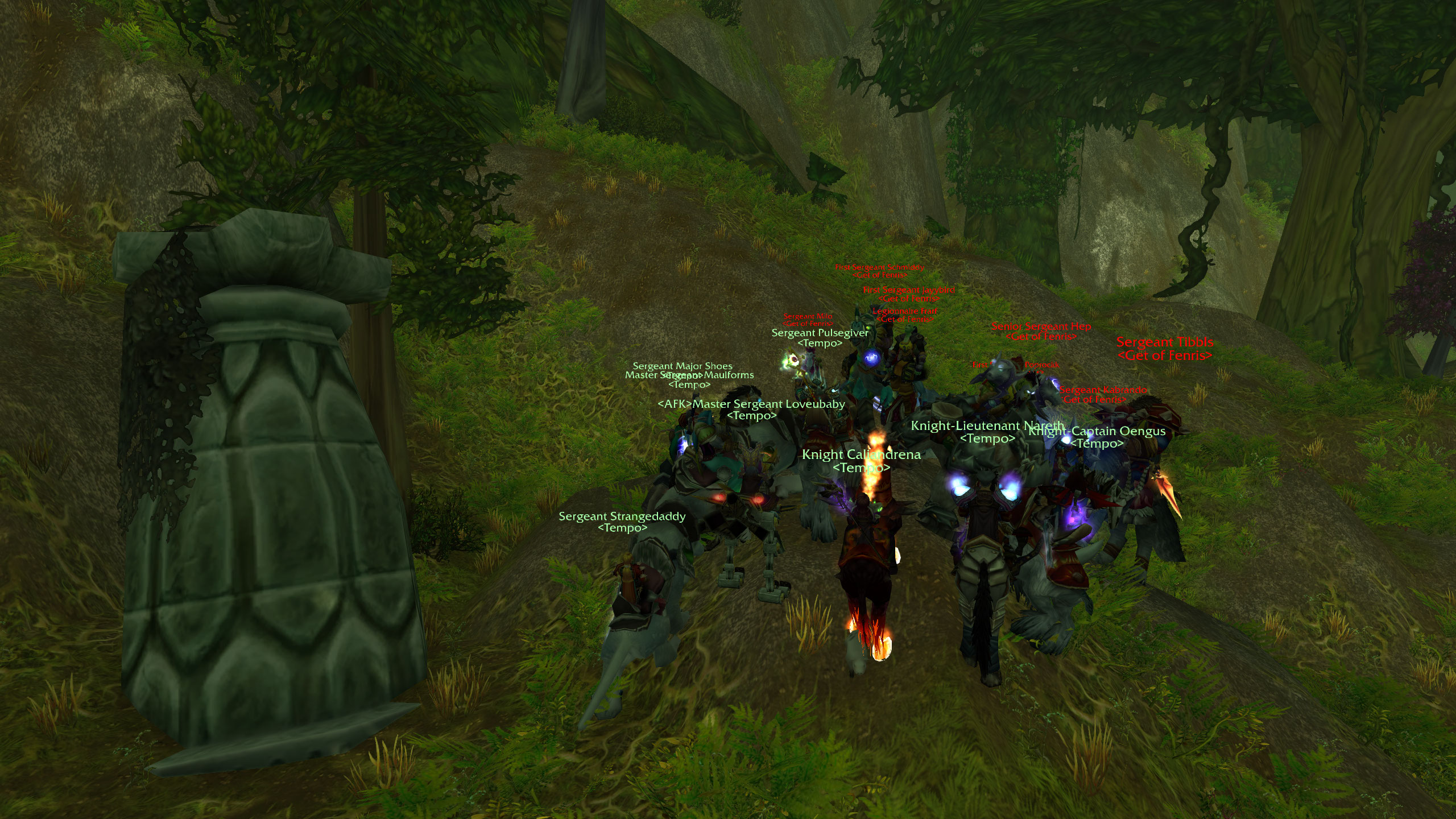 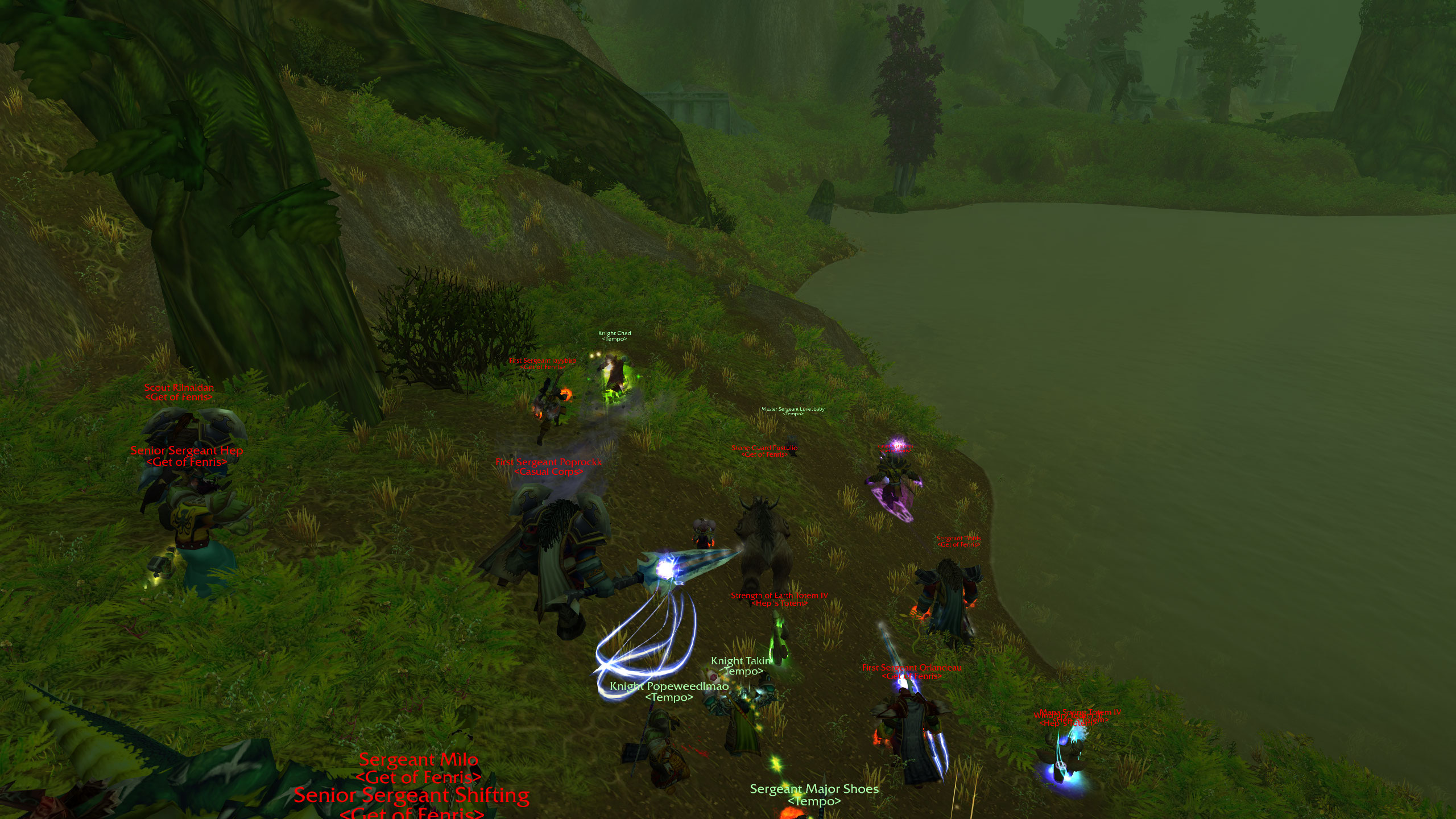 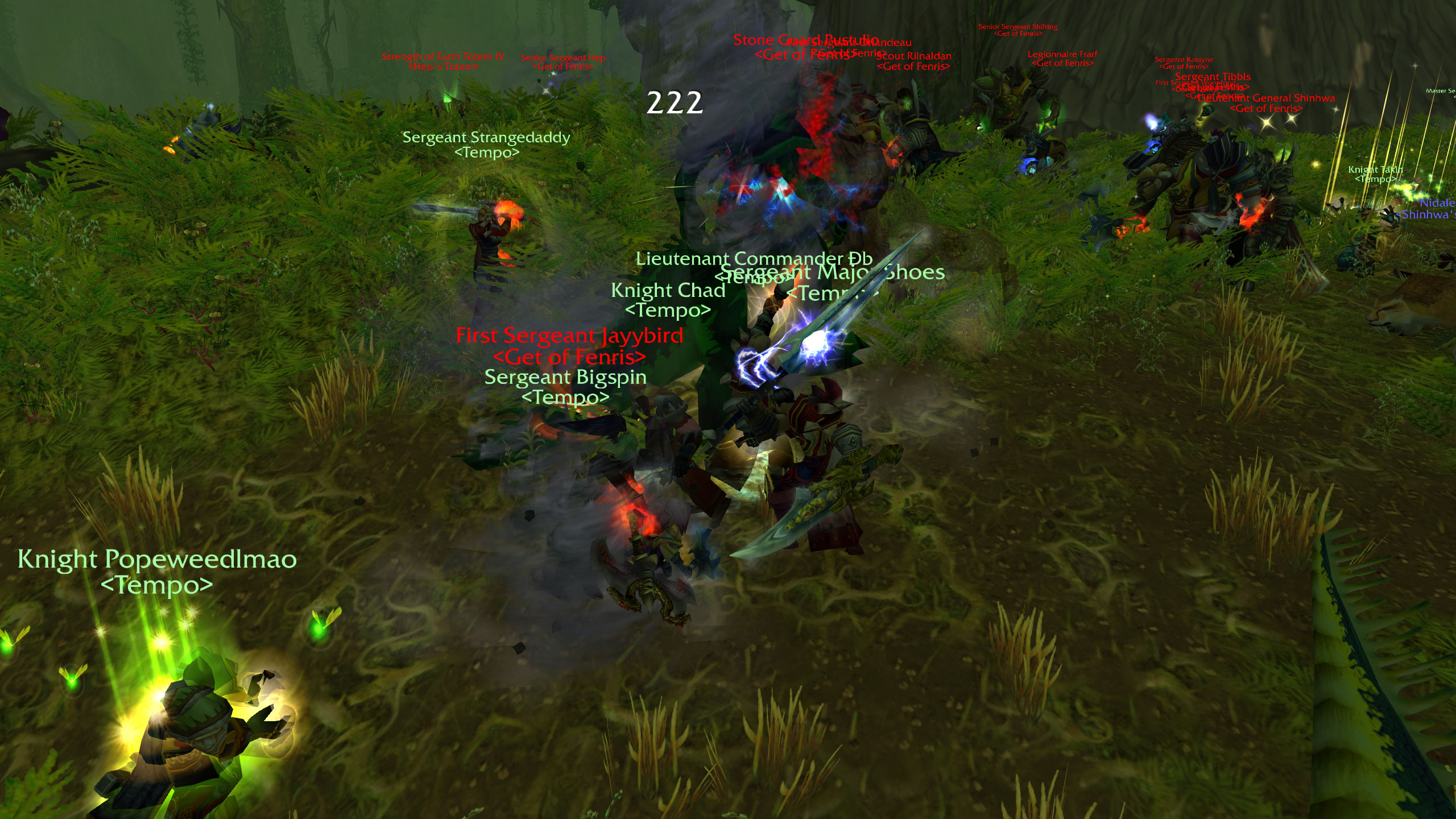 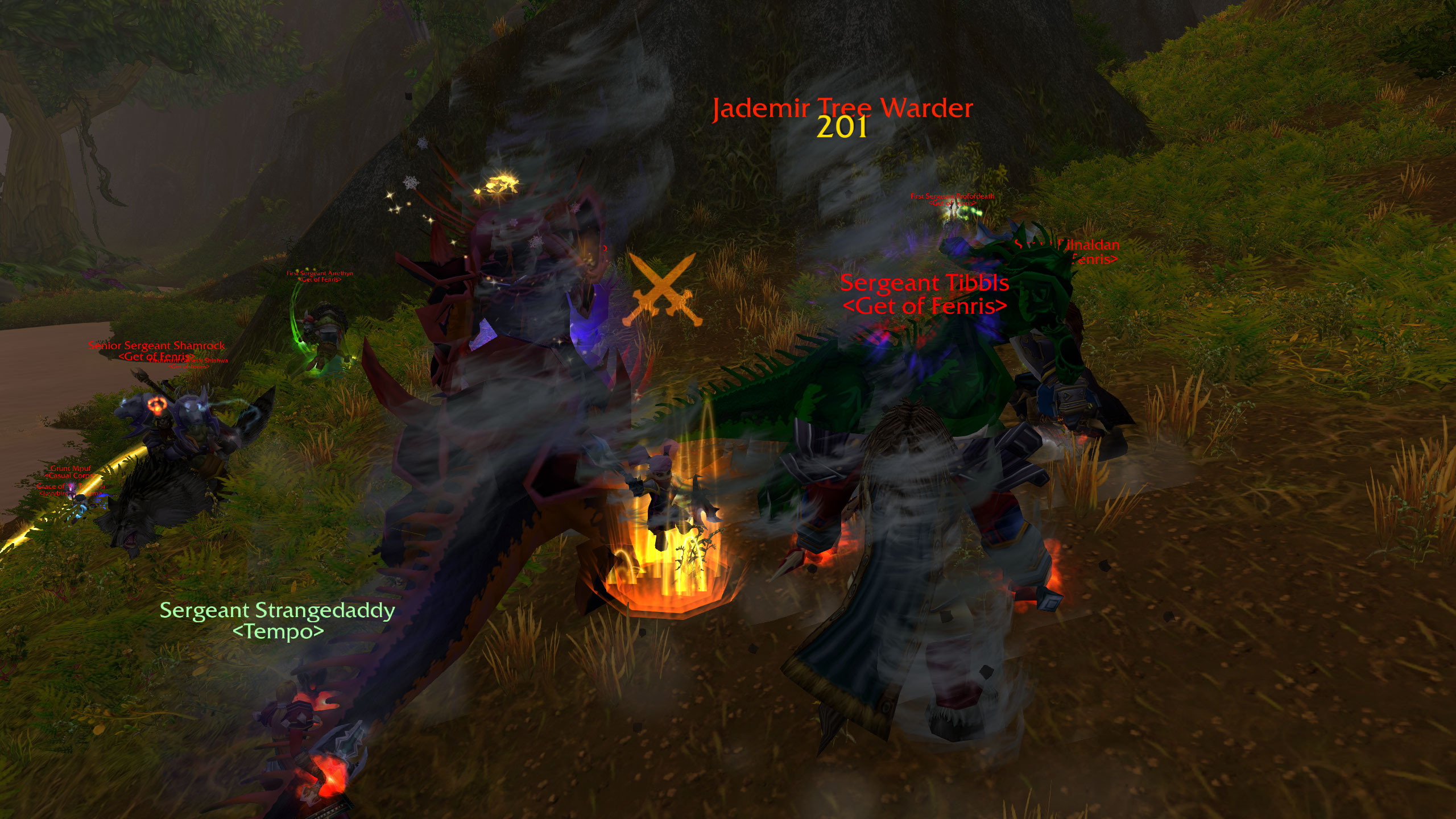 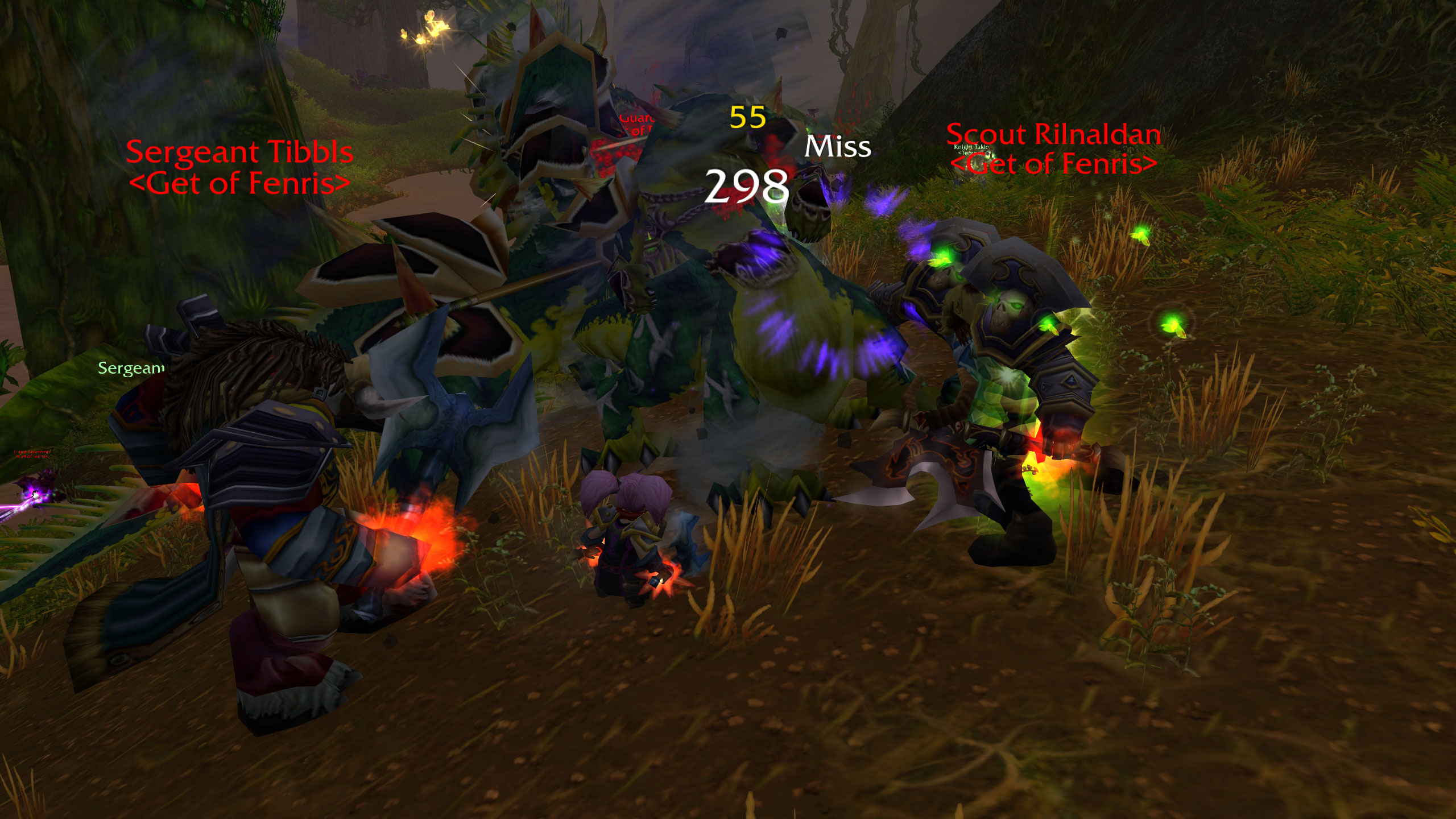 Unfortunately our guy didn't make it. Not enough guild help and too much competition!

As night fell upon Moonglade, <Tempo> summoned 60 of their best, brightest, and most online characters to defend the city. One raid of 40 and another of 20. 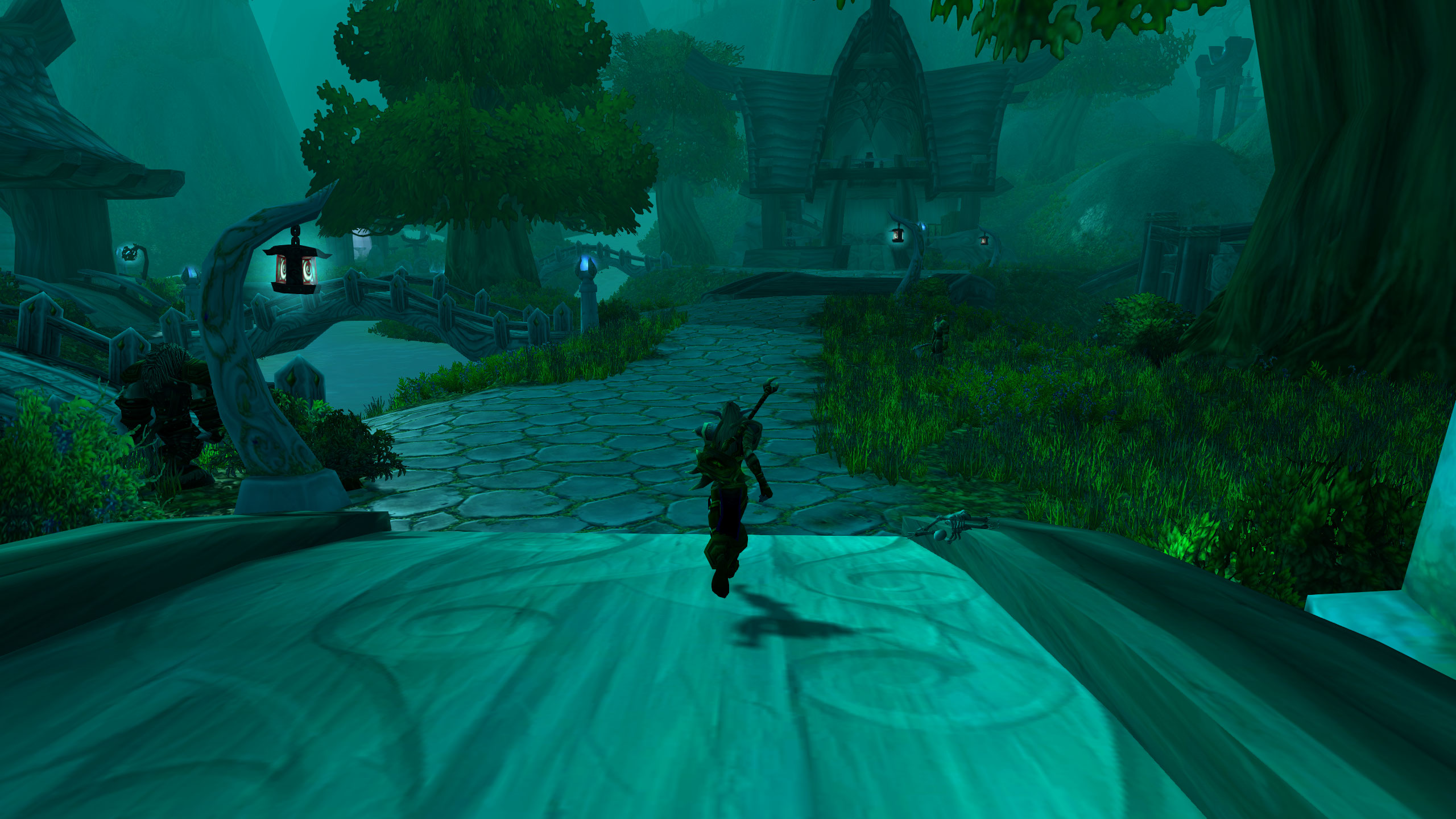 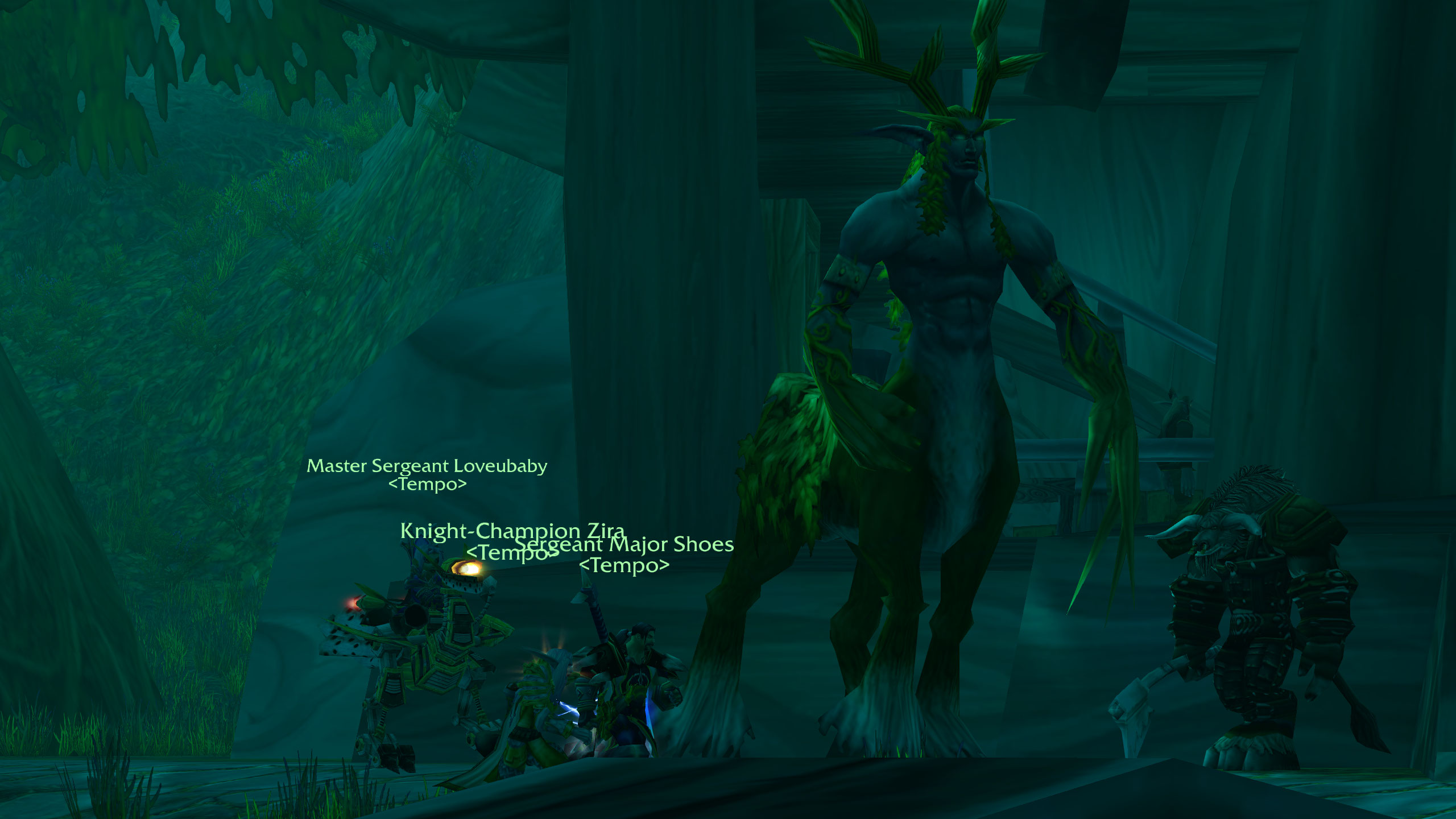 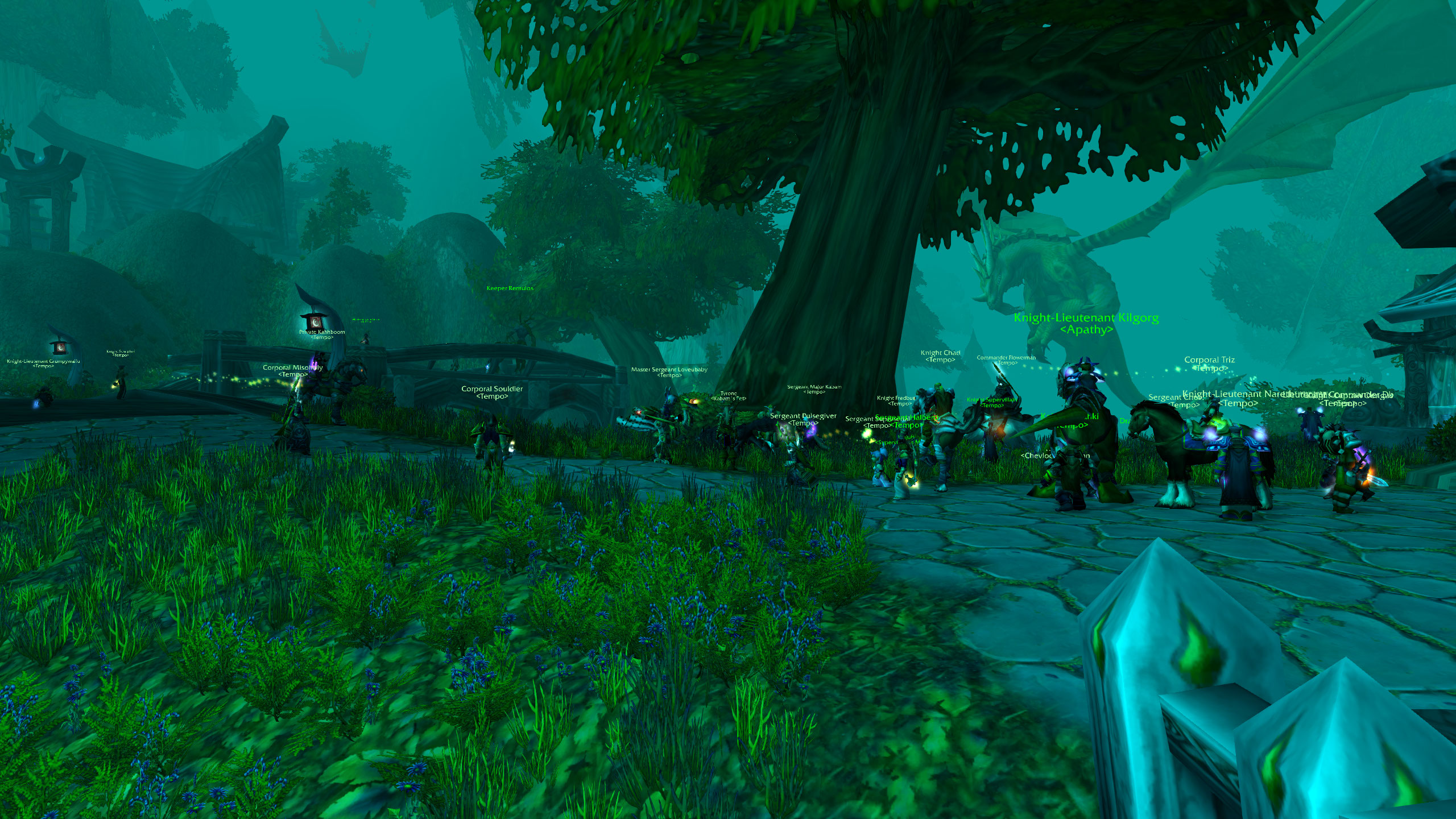 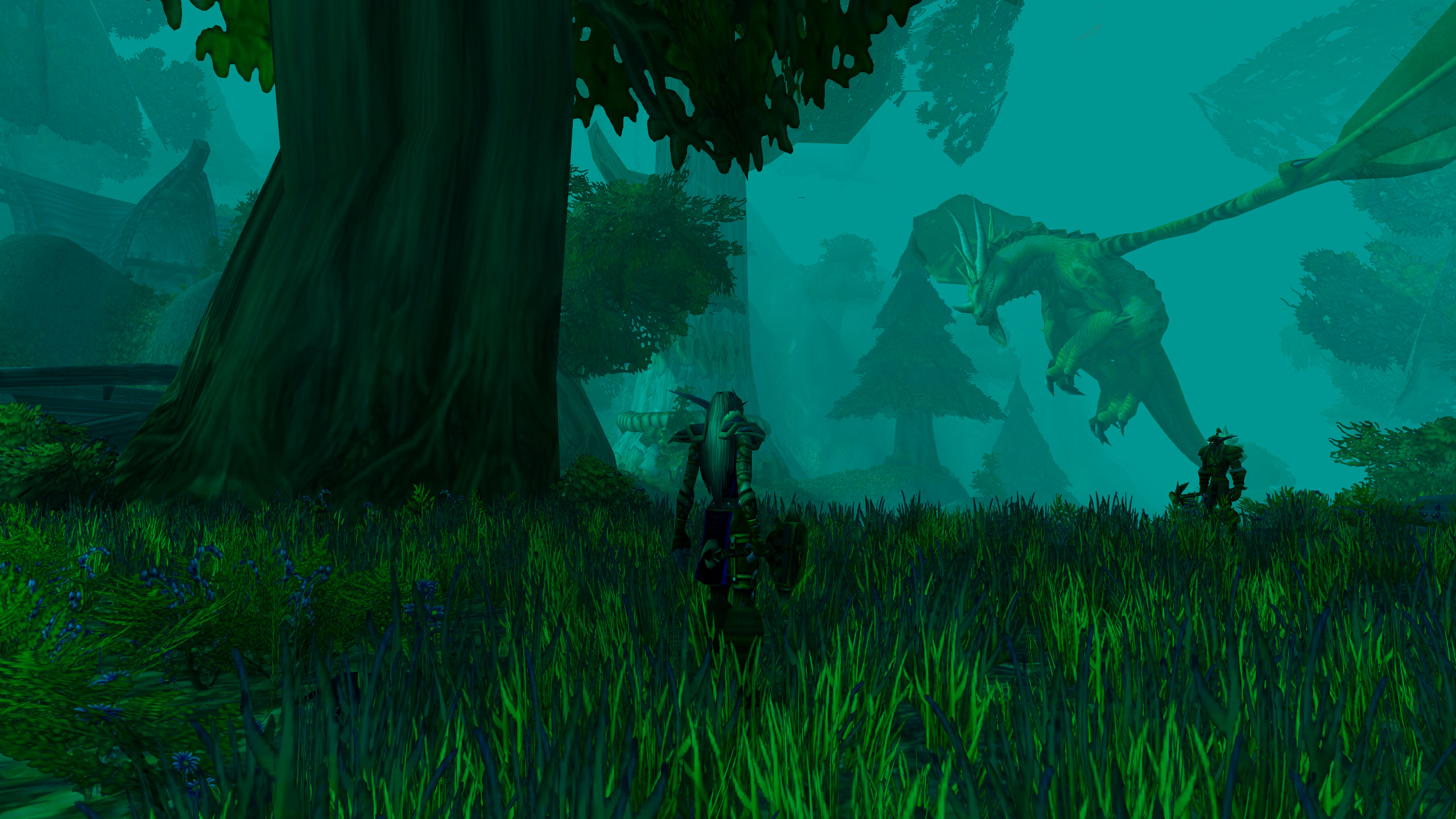 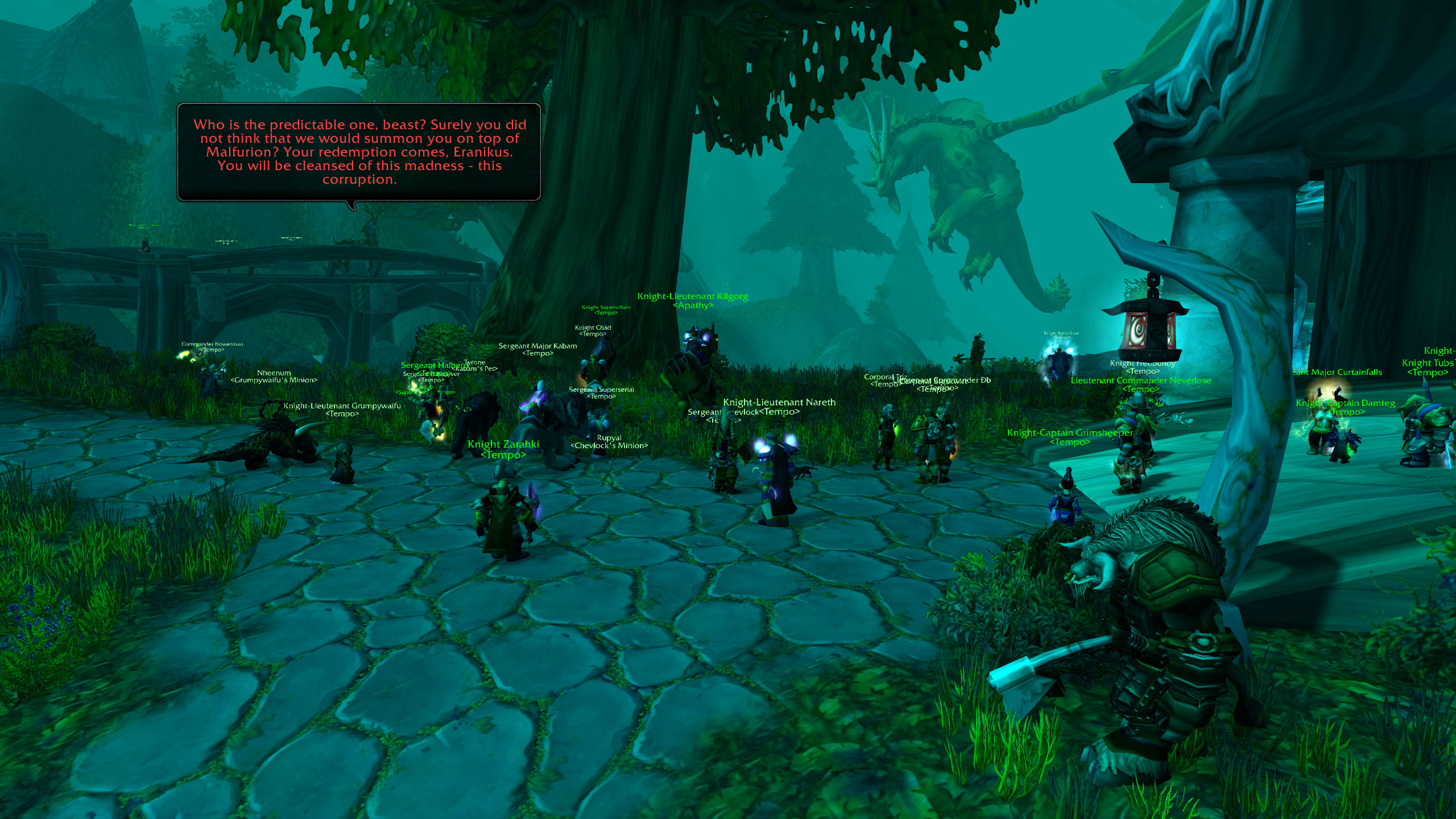 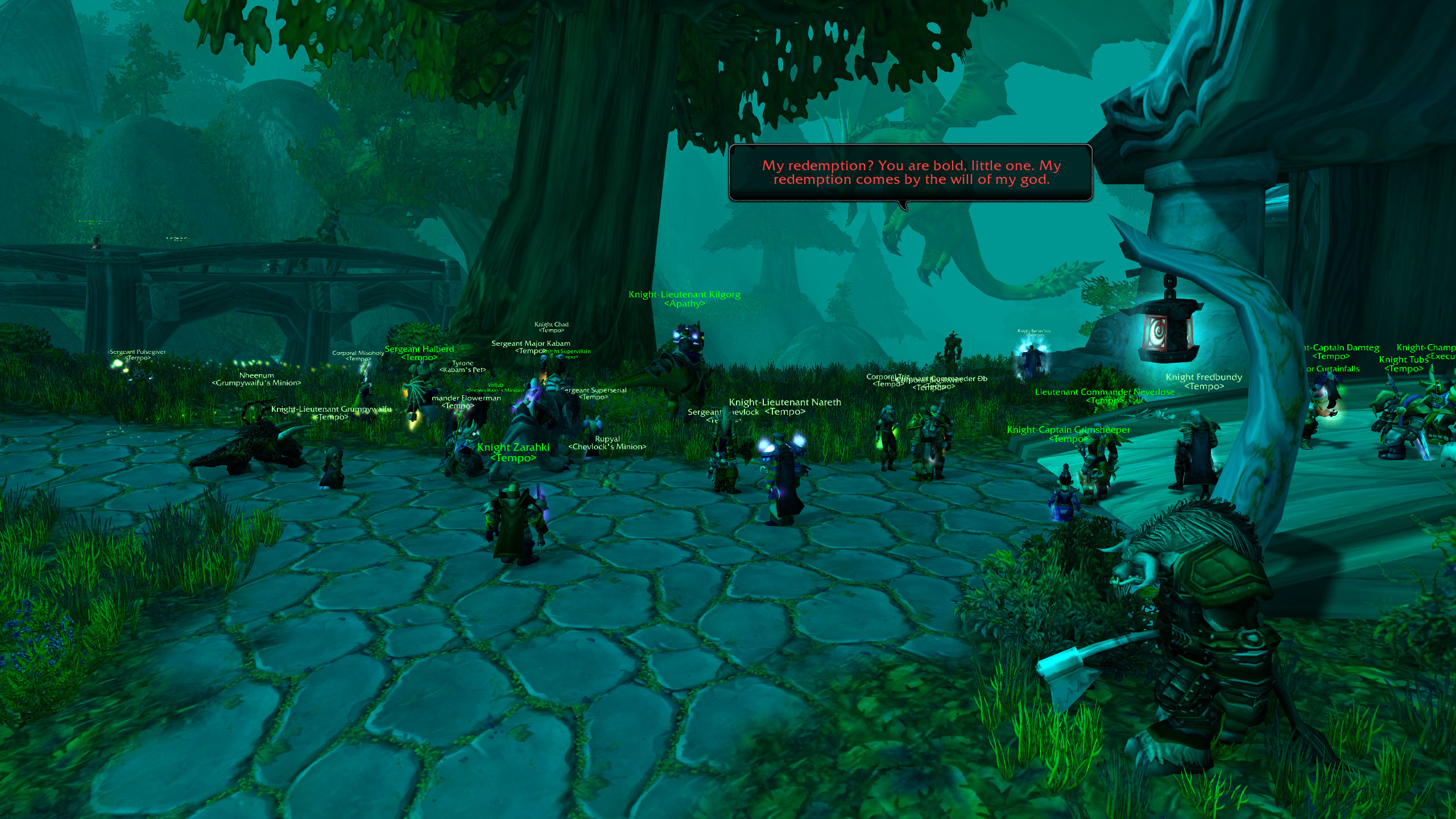 Eranikus's guards started spawning all over the city and began attacking. We took refuge inside one of the large buildings in the center of town. Casters and healers stayed indoors, and the tanks picked up targets who spawned inside and dragged them out. The guards all fired shadow bolts at targets within a 180* angle in front of them, so we all kept them pointed away from our guys the best we could. 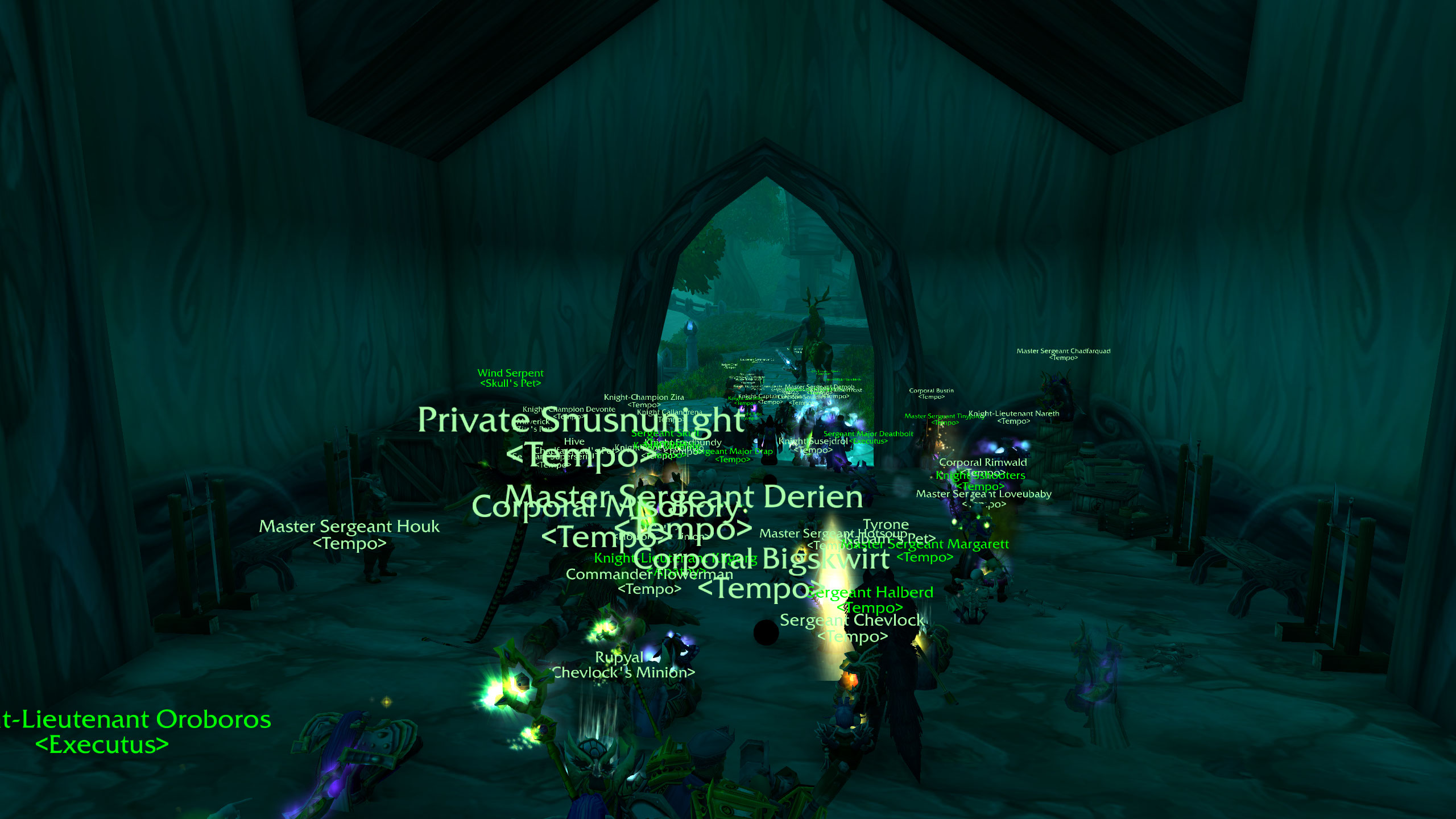 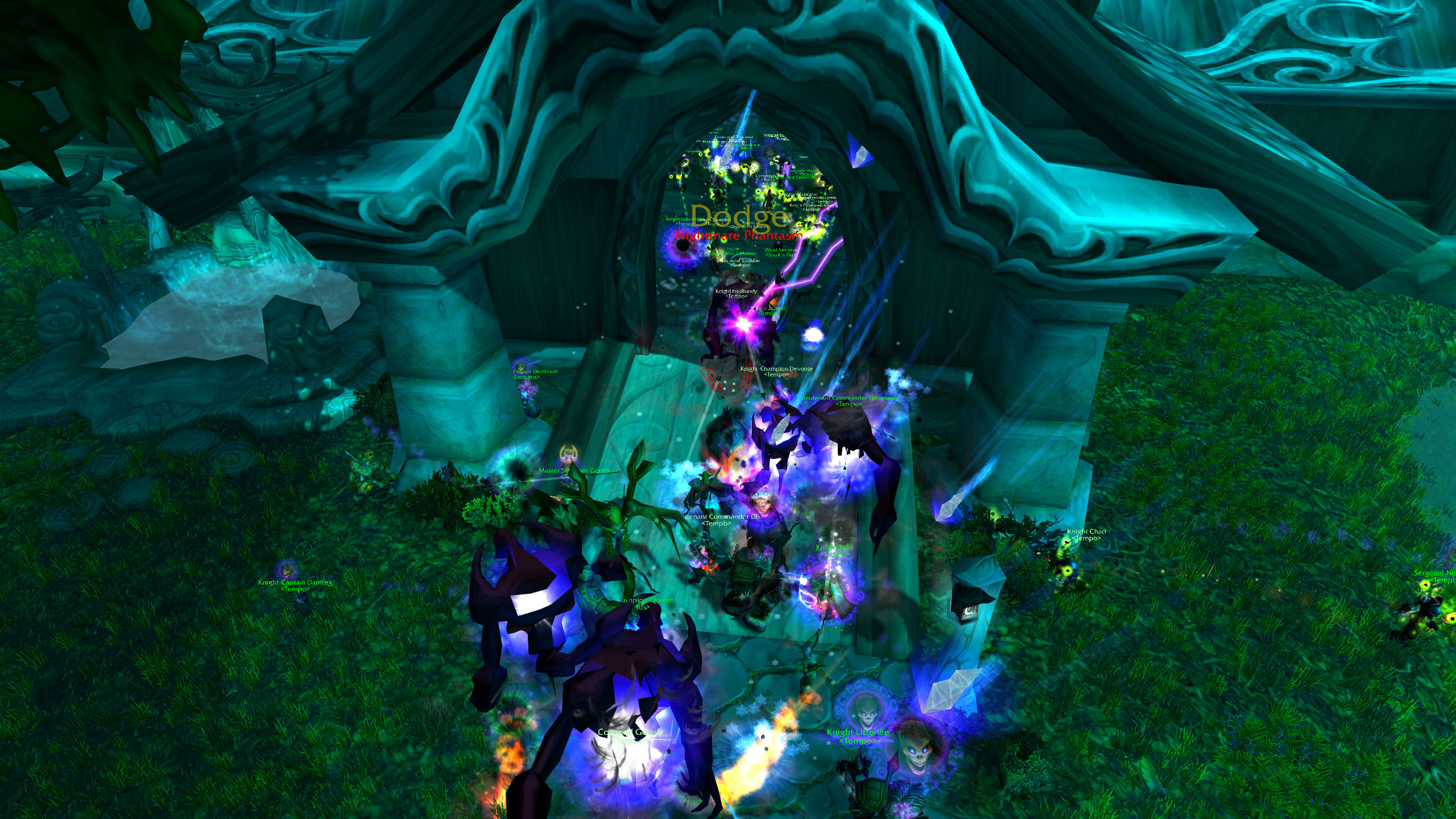 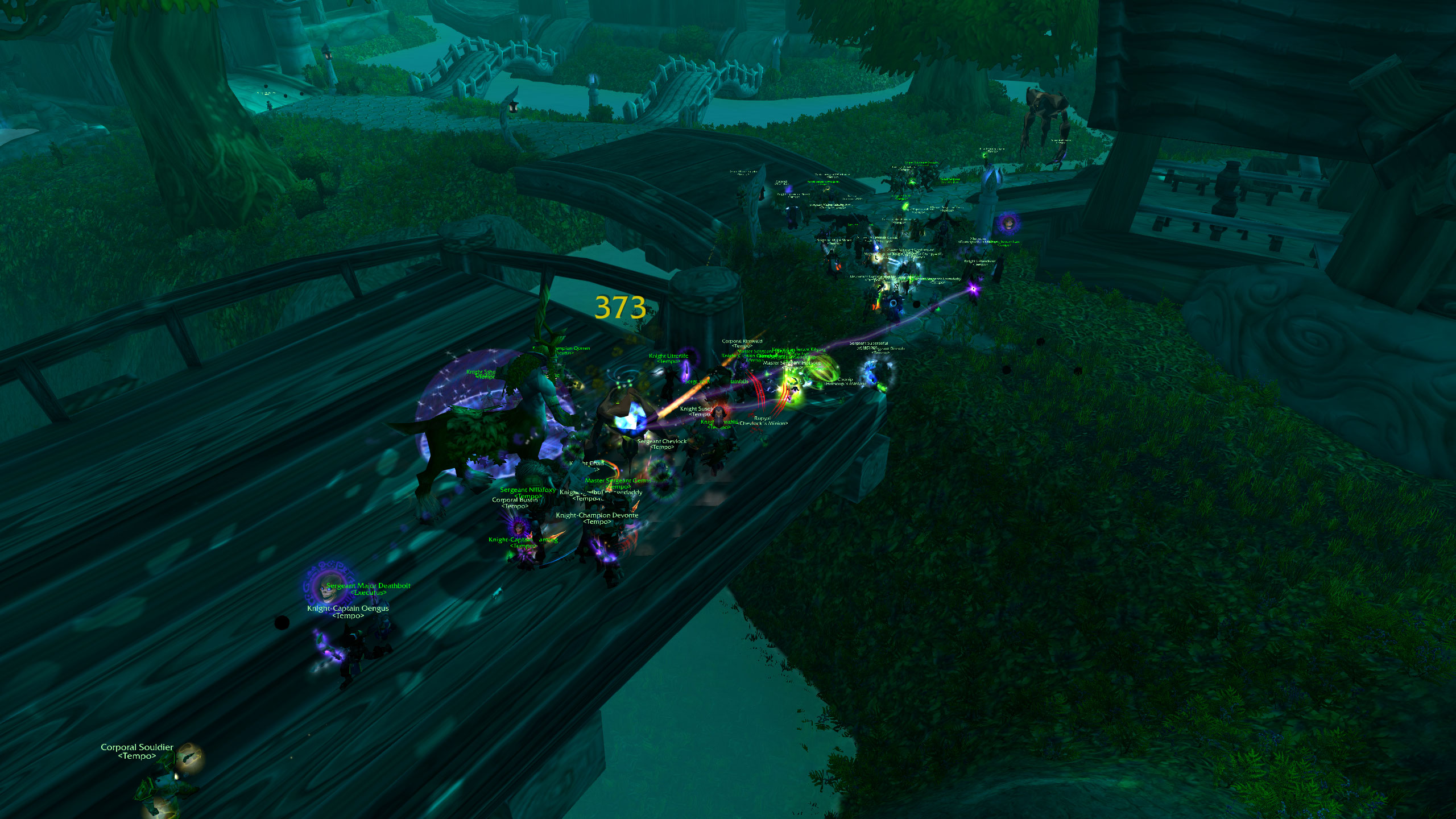 Eventually Eranikus landed and we began to beat on him 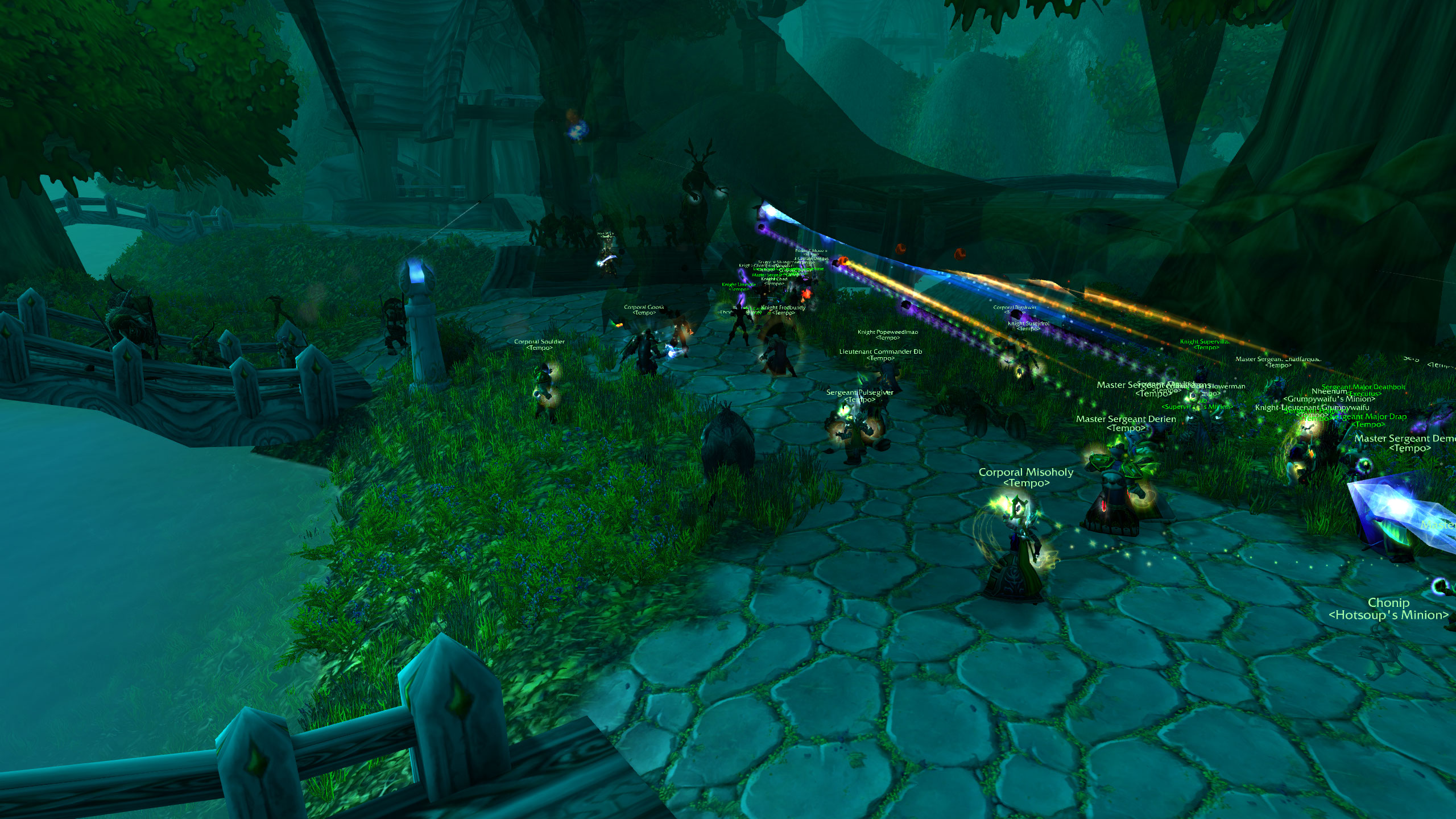 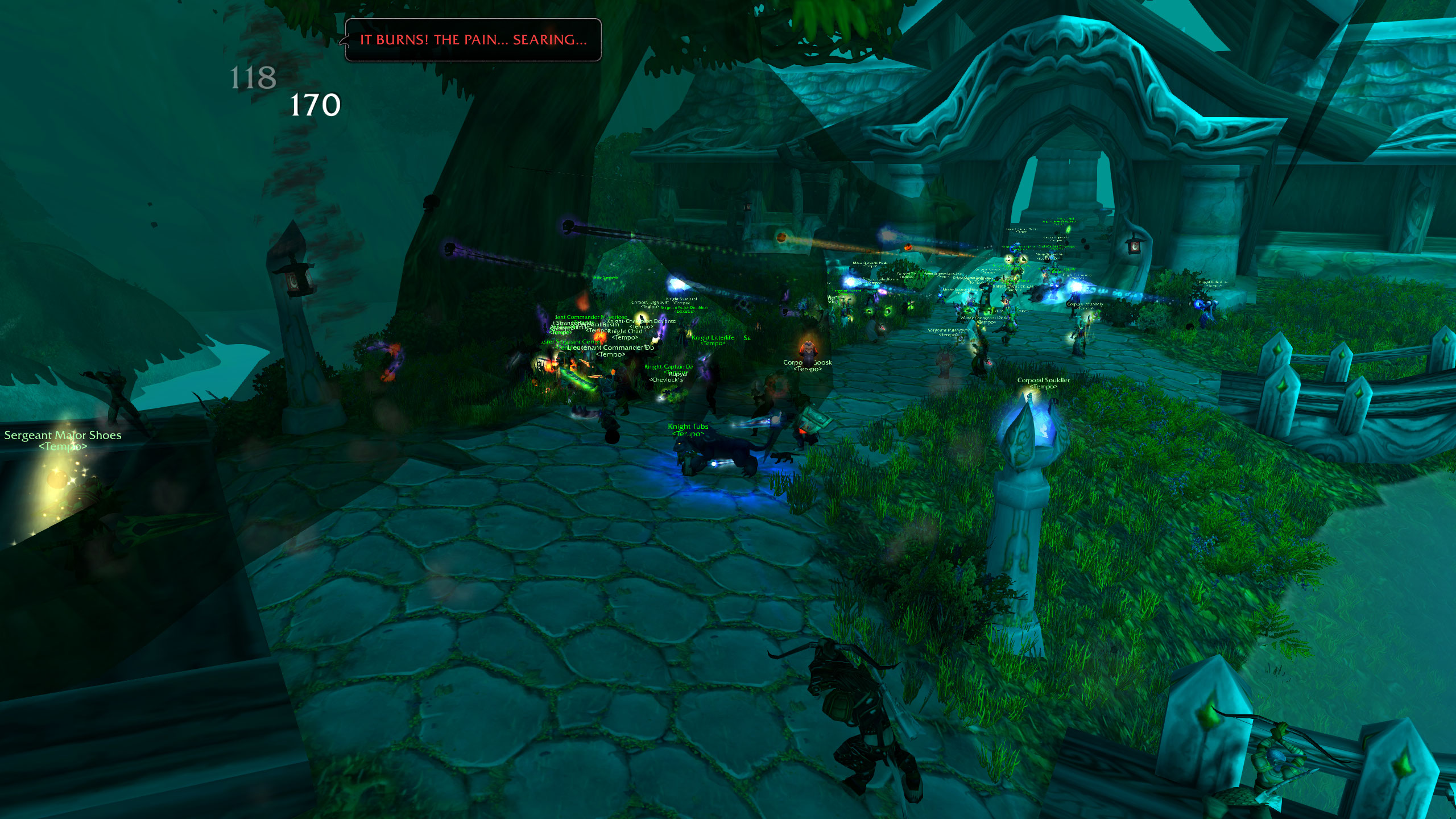 At 20%, Eranikus had enough and collapsed in the center of town. 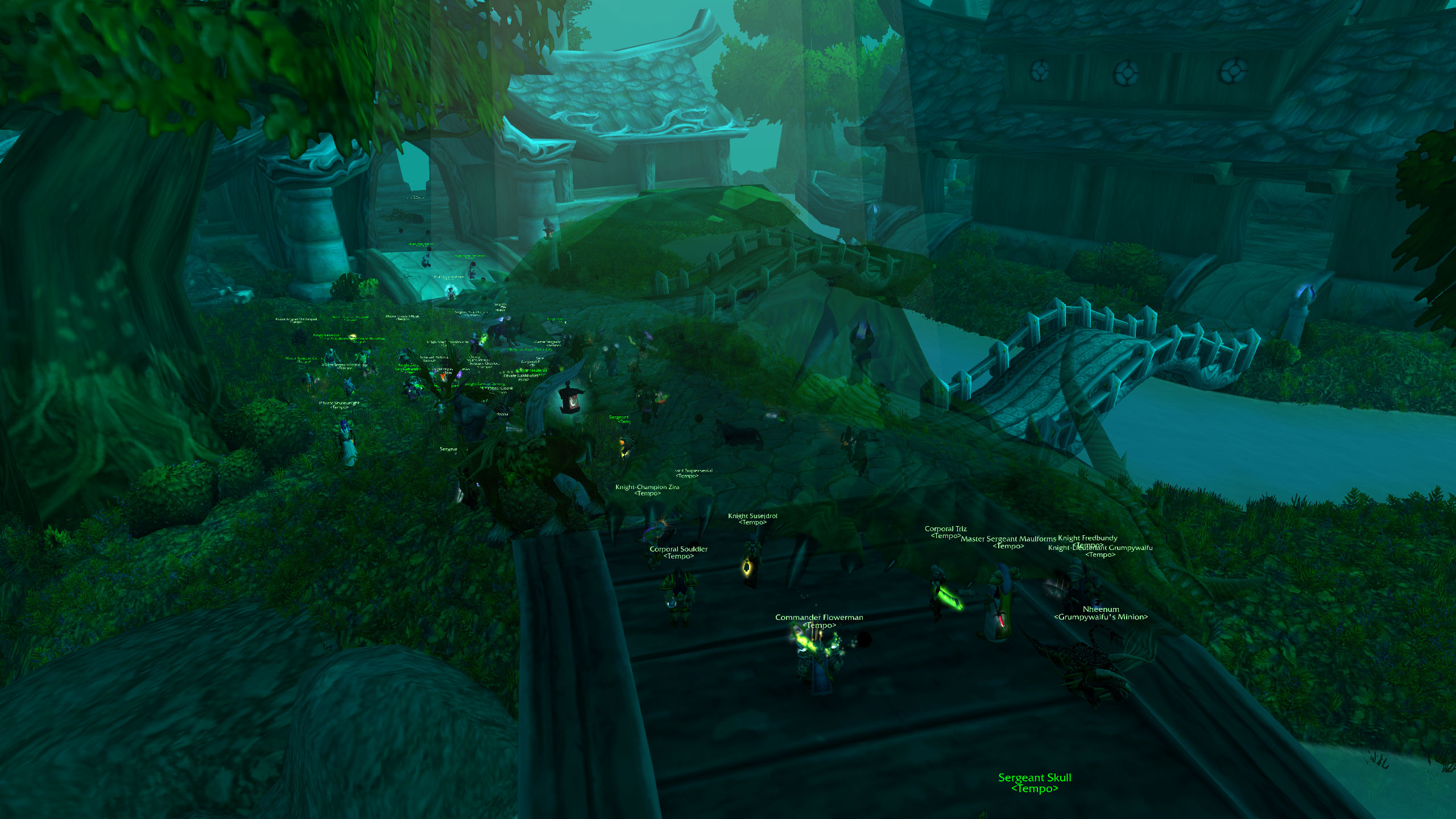 Remulos came down and cured him of his madness. Eranikus the Redeemed rose and thanked us all for his help, and then disappeared. We were rewarded with the https://classic.wowhead.com/item=21139/green-scepter-shard . 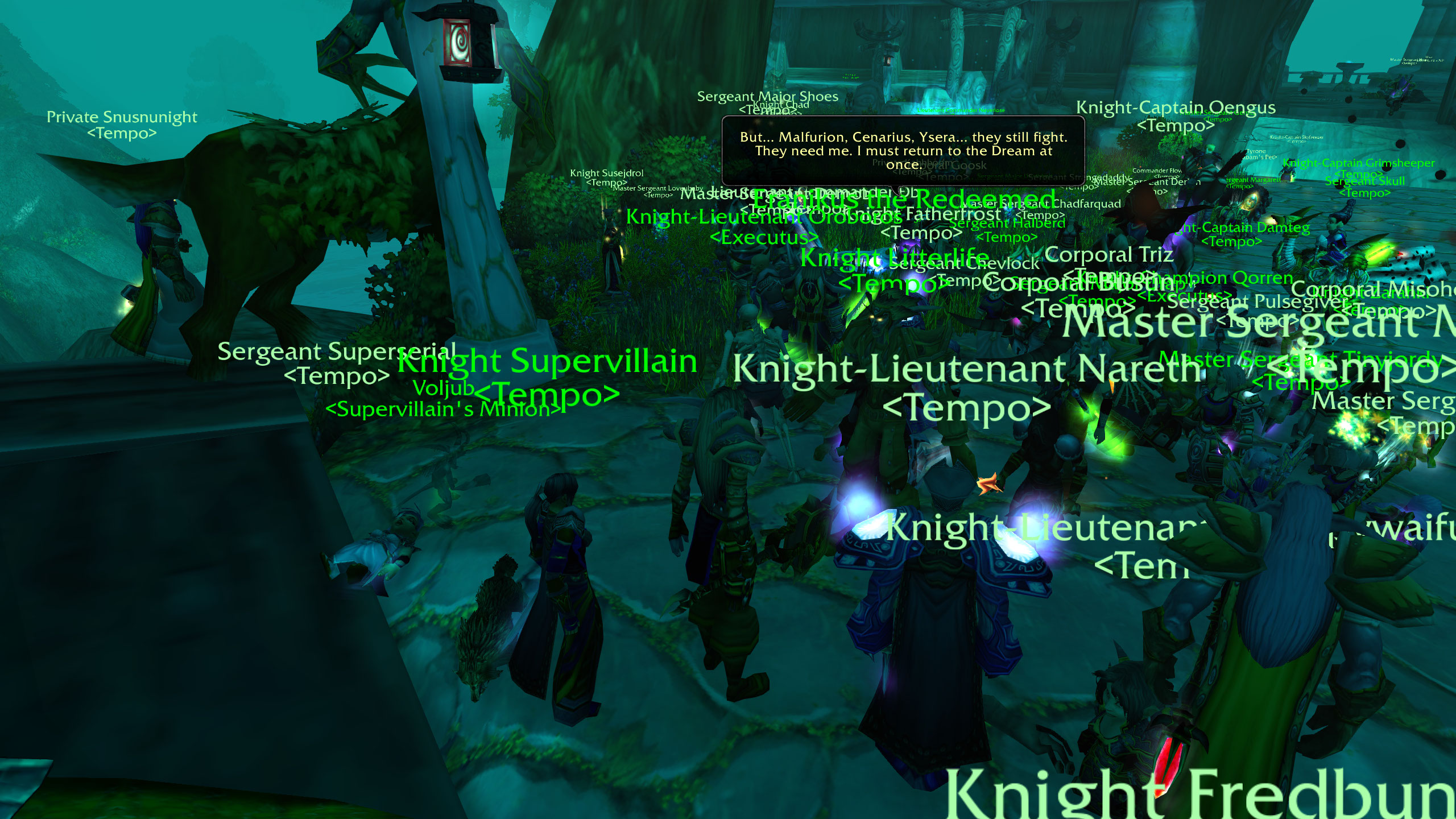 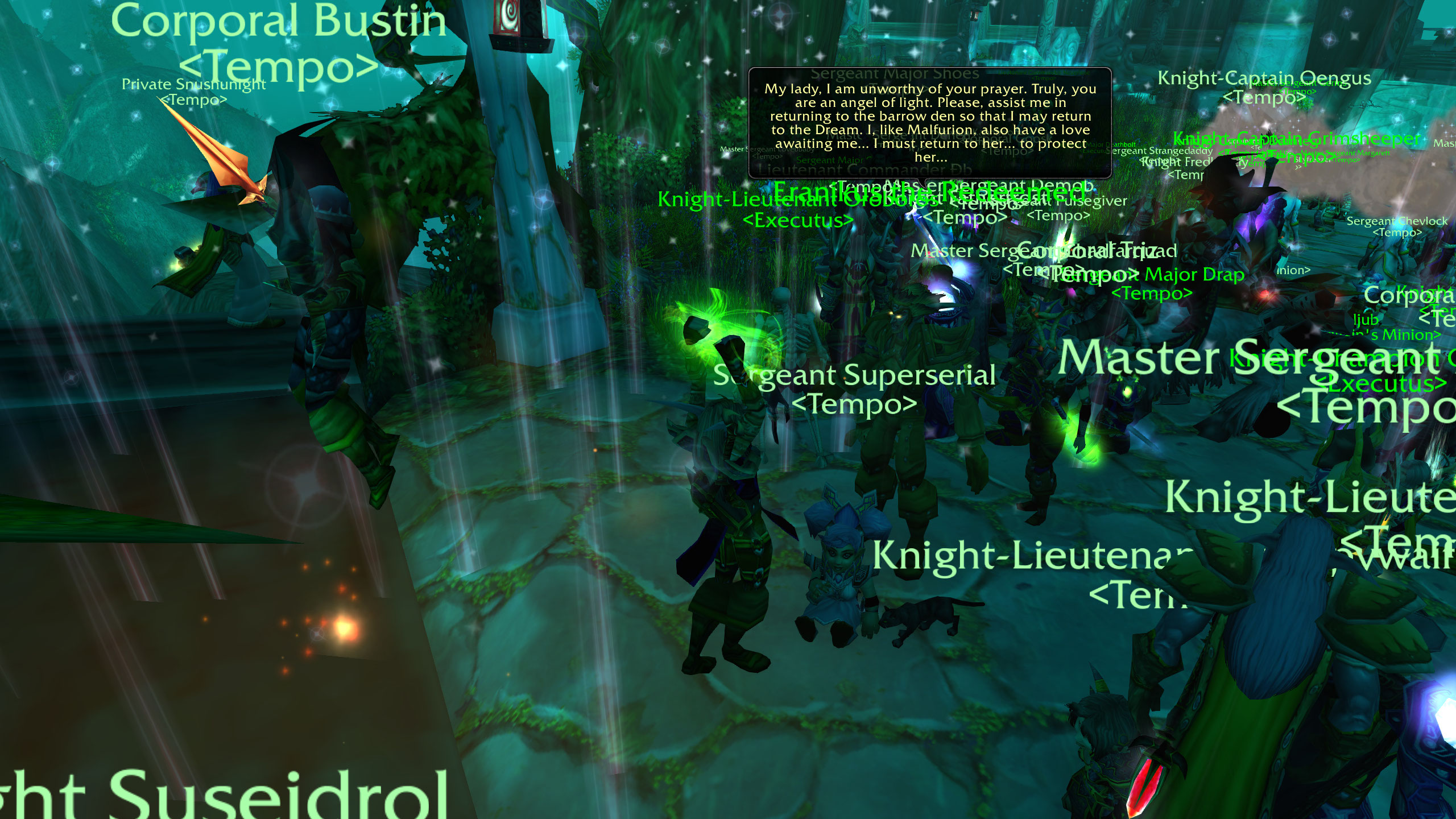 After that, we went and raided BWL. We killed Vael, and that began a 5 hour timer to kill Nefarian. Killing Nefarian rewarded us with the https://classic.wowhead.com/item=21138/red-scepter-shard . 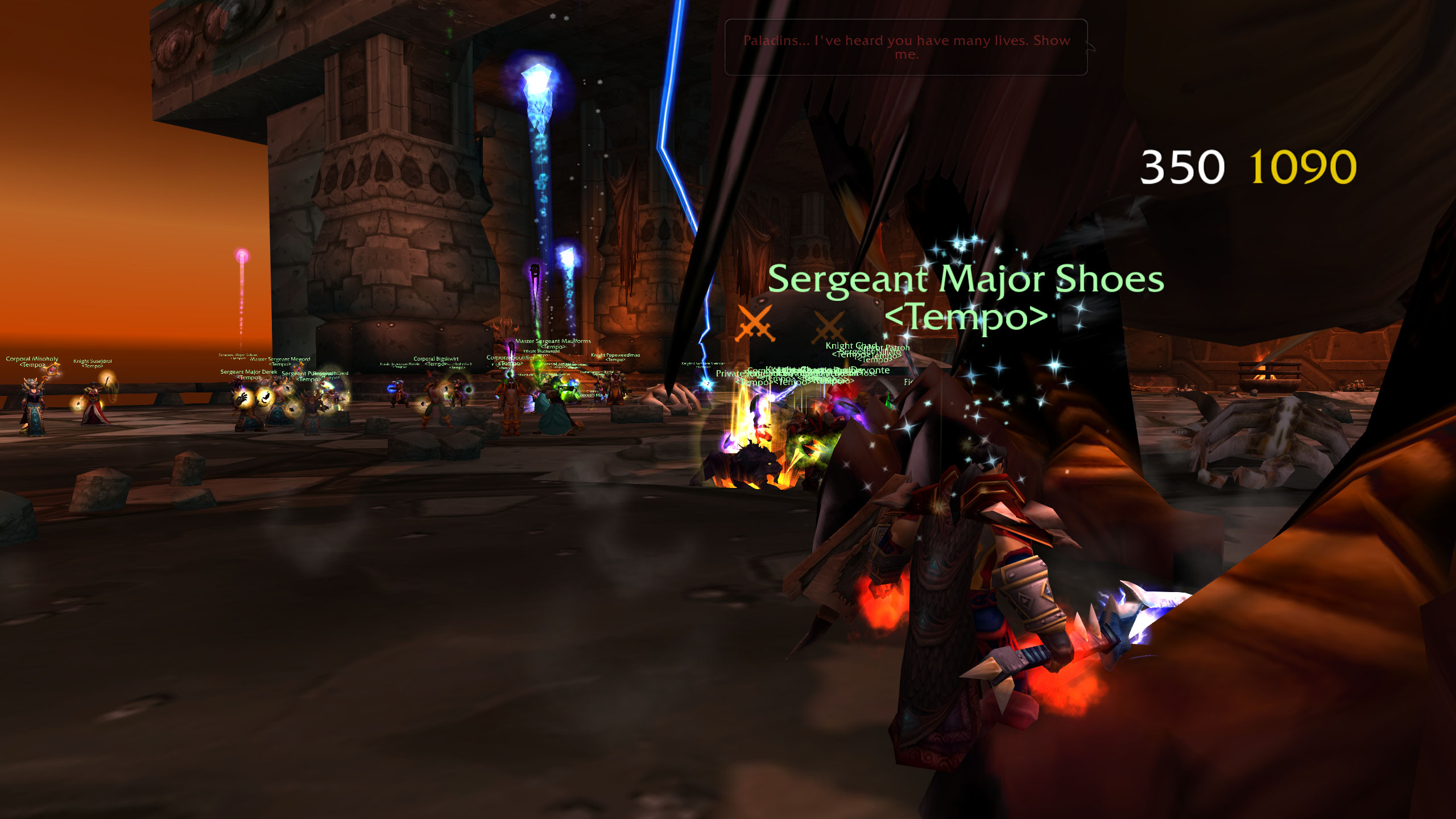 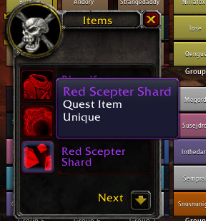 We're doing it man. When this whole thing started a couple of weeks ago, I felt stupid even starting this thread because I thought we had no chance in hell in pulling this off. We are a large guild, but we're a casual guild. We didn't force anybody to help us. We didn't harass people in guild chat to come out and grind with us. Our guys knew where we were and knew what we were doing, and they pulled together and put in mad hours going ham for 12-16 hours a day to pull off the rep grind. The first several days only yielded us about 4,000 rep. I was fully prepared to sink a hundred hours into this and not get it done, but we're almost there. The war effort has still not yet completed, and we have the Green and Red Scepter Shards. Tomorrow we begin working on the Blue shard. After that, we get our scepter.

Unfortunately our guy didn't make it. Not enough guild help and too much competition!

Man, we had mad competition out there for tags as well. We all lowkey wanted to quit a couple days in because it increasingly looked like the rep grind was going to take three weeks for our server and we didn't think we'd have enough time. But we just kept at it, and as time went on we figured out where, when, and how to grind to be the most efficient and eventually things picked up big time. We found that the hours between like midnight and 8am were peak hours for us. A bunch of people lost a lot of sleep staying up to 5am, and others were coming online super early in the morning and we blanketed the middle of the night with as many man hours as possible. We'd have between 3-7 people online during those hours, shooting the shit in discord to pass the time. But even with that, the only thing that saved us was a bunch of our guys started rallying behind us and poured the hours in.

Part of me is sorry that you didn't make it through; the other is happy for you not being this sleep deprived

Guildie is going for it, I've been helping where I can but I'm already burning out from the honor grind so farming elites in Silithus in heal spec is rough. We have some time though by the looks of it so we should be fine.
I just have to think how cool it'll be when someone from our guild is up there on the steps ringing that gong!

How is your grind coming along? I'm a fulltime feral raid tank and have never been resto before, but I've picked up plenty of resto gear. I found that my threat gear was absolutely worthless out there - I had 10k armor and loads of attack power but the lack of mana was a big problem. Being out there required shifting in and out of bear form and healing myself so often that it just didn't work. I mixed in a lot of T2 pieces, a Jindo's hexer and an int offhand, and was still able to maintain 10k armor with 7k mana and enough health to stay alive. That combo let me spam rank 1 moonfire to steal tags, it let me shift as often as I needed, and it let me chase mages and others away with shapeshift spam to break PVP crowd control. It took forever to kill things solo, so I tried to stick around my DPS guys and bring them tags. But I could steal nearly any tag I wanted, and I could bring it back to the DPS warriors and they'd chew the bugs up. It worked pretty well.

Curious if you went this route as well, or if you were stuck healing out there.