I don't know how true this is, but I read a bunch of different posts over the past couple of days about the majority of Alliance transferring off of the EU Flamelash server. Seems like the first of the PVP servers has died. There will be no Alliance left to open the gates of AQ, there are next to no Alliance left in the cities.

This isn't even an inherent Horde or Alliance thing. I've seen this firsthand on my own server at Fairbanks. One side on just about any PVP server is under-represented and gets slaughtered, and people stop playing. Yes people are raid logging now, but from my own friends list of random players I picked up over the levels they're not even on raid teams and they've stopped playing because even getting to BRD takes an hour of corpse hopping.

I blame the honor system. Things were fine before the honor system came out. Ganks happened, but you could exist outside the gates of Ironforge. You could do some farming. You could play alongside members of the other faction, keeping an eye on them sideways as you tried to quest or farm. Maybe they'd attack, maybe they'd even corpse camp, maybe you went over and ganked yourself. But it wasn't a given, and you could still get stuff done.

If I ran the world (of warcraft), then I'd simply de-couple the honor system from battlegrounds. World PVP was fine before when there were no rewards hanging from it and no mandatory grind attached. I'd disable honor points entirely outside of battlegrounds and return the PVP servers to the way they were prior to phase 2.

Feel bad to people stuck on Flamelash. Hope this situation doesn't spread to other servers. Hope the release of battlegrounds in a few days helps return things a little more to the ways they used to be.

I've played on Pservers with upwards of 14k players and despite the playerbase farming in the EXACT same ways they are farming on Classic (dishonorably while focusing on honor per hour strategies - flight master camping etc), the servers were fine because the factions were balanced. Balance is the issue. The onus of faction balance rests with Blizzard. Blizzard not only didn't anticipate this obvious issue, they magnified the issue with layering and with no limitations during name reserves OR during server caps. Furthermore Blizz then allowed server transfers off major realms that were deemed "overpopulated" but didnt restrict the transfers to the over-represented faction. They couldnt have possibly done a worse job balancing the realms. In fact, the few things they actually did, enhanced the issues... Issues that have existed for 15 years.

I just dont know how they didnt foresee this issue? Its as if they havent played their own game. It scares me to think that a 14 year old version of myself could have probably had more insight into these issues than veteran developers.

edit: You think you do, but you dont almost became a self-fulfilling prophecy due to a lack of effort and foresight on Blizzards end.

If that shit continues Blizzard might have to take some serious action.

A friend had a bright idea once: faction specific queues for pvp servers. That might solve this issue.

I just hope Firemaw stays fine, for now the thing with horde got the numbers but alliance is more hardcore is working out. 🙂

Well I hope the bgs will make people busy cuz Im rly tired of the shitshow Fiemaw is atm.

First hand experience playing on Earthshaker for some time now.

We had a pretty balanced server before, slightly Horde favored - they fought and won their fair share of fights but from an overall perspective we still beat them. This seems to be the case on most servers.

If you take a look at the top PvE loggers on every server, you'll see mostly Alliance players there. Horde does raid as well and some do it very good, but from an overall perspective Alliance beats Horde on speed clears, world firsts etc. This also seems to be the case on most servers.

Now, I don't know whether people PvP more on the Horde side because of racials or because that faction caters to some personality traits - but it is the truth. On my server, half of the guys from the top Alliance guilds don't PvP whereas in my guild >90% of the guild does PvP and raids in PvP specs. And there are other Horde guilds that do this, no Alliance guilds that I know of that do it either.

The imbeciles from Flamelash announced this move for some reason and thought they would make ES an "Alliance dominated server" - they joined ES discord server spamming "lul where the horde at" mid day, saying it was going to be a 70:30 A:H server and so forth. Push came to shove, we kicked their asses in every area we found them and their zugs went from 10 to 80 in a matter of hours just so they wouldn't die. The guilds that joined were absolutely atrocious at PvP and were served. They guys that transferred didn't care to put up a fight, they just wanted to zug just as much as Horde did.

Did I mention that Alliance got at least half of the World Bosses on Flamelash as well, according to multiple sources? Not just "alliance", but solely one guild because Horde were very split on that server. Just proves the point that if Allies wanted to get organized on that server and kick some ass, they could have - but it's far easier to live the life of the raid logger and cry on the forums cause you didn't have enough sense in you to roll on a PvE server.

As for the folks on Flamelash, I don't care. There's pros and cons to moving and staying, they knew this was coming, the guys who made a choice will have to stick with it.

I don't think it's Blizzard's fault or anything. Server transfers were there to balance population from more populated realms to the less populated realms, and most of us ended up on Earthshaker for this reason. Even a 5-10% population imbalance is not enough to explain getting owned in every possible area at every possible time. But if people think they're entitled to go solo in a PvE spec to farm nodes in the afternoon on a high-pop PvP server during P2, they have another thing coming for them.

Anyone who thought P2 wouldn't be madness and terror was insane, stupid or just didn't care - and if people think this is going to stop when they release BGs they're in for a surprise as well. Why queue up and do nothing for 30 minutes when you can keep grinding honor out in the world?

It's a player created problem that needs player created solutions. Flamelash is screwed beyond all hope at this point not because of Blizzard, but because a bunch of cowards who thought overwhelming another realm would make up for their lack of skill.

Nymis , I dont put any stock in the Alliance vs Horde playerbase being different. These are the same players who behave the same who play the exact same game. Being someone who actively plays both horde and alliance and has for many many years, there is no difference between the players on either faction. Our guild has people who are primarily invested in PvP, which is clear because they all rolled on a PvP realm. Our guild is Alliance and the majority are using PvP specs, because taking a PvE spec for content that lasts 2 hours per week isn't worthwhile. None of these issues are created by a differing of behaviors or psychology on the players part. These issues are caused when servers are imbalanced. That issue tends to snowball if not corrected.

It's a player created problem that needs player created solutions. Flamelash is screwed beyond all hope at this point not because of Blizzard, but because a bunch of cowards who thought overwhelming another realm would make up for their lack of skill.

I disagree that this mess is entirely player-caused. Yes, players are going out and deleting the weaker faction. But they are following the game design. The only way to rank is by collecting these grind points to rank in the PVP honor system. The system design itself leads to this behavior. Players are quitting en masse from being farmed for points.

I'm on a PVP server and I'm not going anywhere. I'm not participating in PVP. When horde rogues sit in front of our bank and gank people I sit back and wait for my PVP flag to turn off and then go about my business. I am on this PVP server because I found a guild and a raid team that I'm having a lot of fun with. I'm on this PVP server because of the PVE content. I signed up for a PVP server because I thought it'd be fun for the occasional gank in either direction. I won't rank. I'm contemplating going on a drink vendor killing spree to rack up enough dishonor kills to knock me back down from my accidental rank 2 back down to rank 0 so I award less honor when ganked.

The classic honor system is terrible. I don't have any ideas on how to make the honor rank itself better, I'm not interested in PVP so it's just something that's there. But I know I enjoyed the alliance/horde interactions a lot better before phase 2 launched. I just want it to go back to the way it was before we became walking PVP points. I want the honor system to be disabled outside of battlegrounds. I want battlegrounds to be the only place to earn honor points so the rankers have a containment zone so they can stop shitting up my server. The honor system makes people behave this way and it sucks ass. 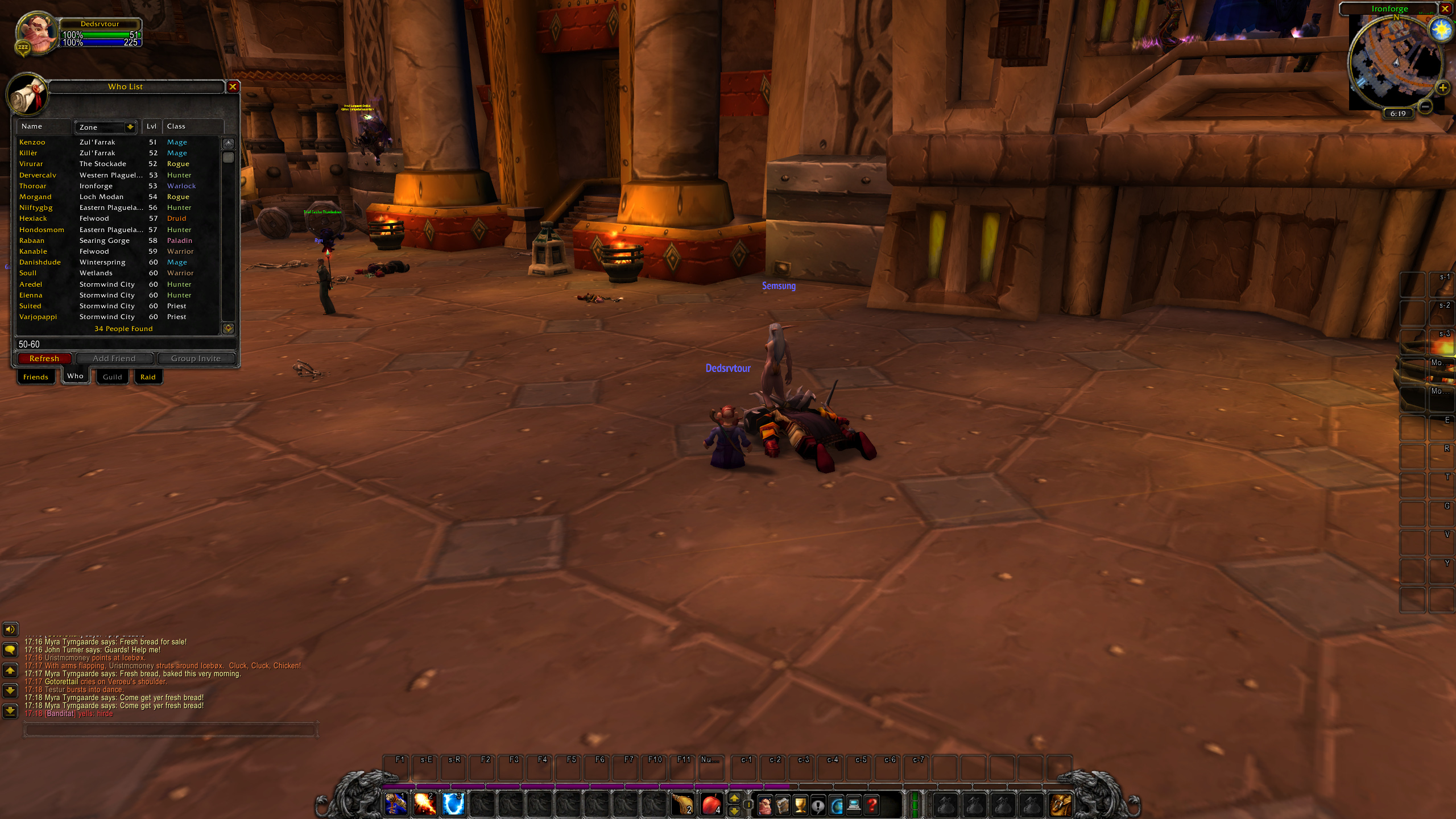 The honor system has to be shut off outside of battlegrounds. Flamelash didn't survive Phase 2. I wonder how many others will go under before BWL even opens.

Reminds me of Fairbanks with layering haha. Thats a rough time.

EU Golemagg is fine. Horde is more populated but Alliance is more tryhard. It evens out.

The honor system has to be shut off outside of battlegrounds. Flamelash didn't survive Phase 2. I wonder how many others will go under before BWL even opens.

I couldn't agree more with Pippina. I'm so amazed to see that with only a single carrot (the so-called Honor), people that were enjoying the game together, are now abusing the system in order to get that +5 stamina and 0,25% crit chance on their gear that would help them reduce their raid cleaning time by approximately 5 minutes. That's so crazy.
@Nymis : How do you think the dominated faction would react honestly ? Getting farmed all day long just for your great pleasure ? How would YOU react, please you tell me (and maybe you will if your server has been zerged by all the refugees from Flamelash).

I was there 15 years ago, and it was nothing like this honestly. Just because you can do something, doesn't mean you have to do it. we're all human beings, with something called a brain, able to think before we act, and are responsible for our actions. Probably the honor system has an inherent flawed design, but ultimately the game is what players do with it.

So maybe remove or severely attune honor gain from wPvP would be a good idea.