Hello, fellow warriors! I am having a hard time working out some good keybinds for my stances. What are yours? I have used Ctrl E, Ctrl F and Ctrl C before, but they feel very clunky. Give me some inspiration

While I've retired from my warrior, it's important to note that a lot of the time I would stance swap by using some sort of macro. It was very rare for me to actually manually switch to, say defensive stance -- as an example, against a rogue -- where I would 1h/shield macro swap to defensive stance.

Consider all your abilities in which you're swapping to where a macro could be put in place. A player could tap the same button multiple times for multiple spells, versus manually swapping between a stance and using an ability.

SIde buttons on mouse / mousewheel. Alt/shift modifiers. F1/2/3. Foot pedals underneath your desk. Macros that bind certain abilities with shifts. Tons of options.

I always liked using F1/F2/F3 for my stances. Right next to the action keys and I never needed to target my party members as a warrior anyway. 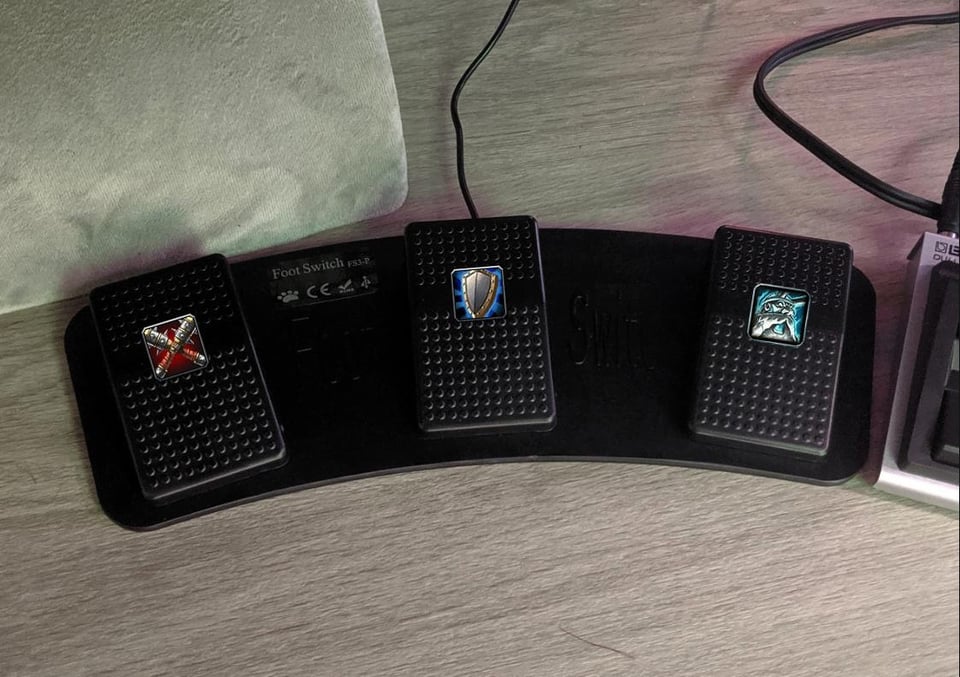 It is photoshopped but actually quite a nice idea.

Mouse side buttons. Only need 2 of them b/c you'll be in one of the stances already.

Mouse side buttons. Only need 2 of them b/c you'll be in one of the stances already.

You just remined me of trying that out when it releases. Thing is it's gonna need a macro, cause the only bar that changes with the stance is the main one, wasting you 2 useful slots

Not if you use a bar addon. You like Bartender/Dominos/whatever will let you switch as many bars as you need when changing stance.

My Combat to Beserker stance and back to combat was on Q.

4 was my defense bind and then Q to combat or Shift Q to berserk from Defense.

I would recommend the mouse wheel if you have a good mouse, if not or if you're not comfortable (like myself) then go with keyboard binds close to your fingers with little movement.

Mouse wheel binds are extremely faster than keyboard binds but little room for error. (Like if you're drunk it'll be a circus ride for you).
Keyboard binds aren't as easy to mess up but not as fast as the mouse wheel.

Like some others have said in this thread, I think shift/alt modifiers are the best way to handle stances, this way more binds are freed up for your standard abilities. My stances will probably be on either Shift+1/2/3 or Shift+Q/W/E, something in a straight row corresponding to the stances on the stance bar.

ctrl+ A,S,D works for some people.

This guy posted some really high tech macro-based stance dancing stuff on reddit a while back:
https://www.reddit.com/r/classicwow/comments/cl85ma/warrior_stance_dance_complete_macro_suite/

Personally I think it looks way too cumbersome. Using Alt+ modifiers constantly to use anything in defensive stance just so you can switch a little bit faster doesn't seem worth it at all. I know some people would do stuff like this but only macro it to one ability, i.e. mash Overpower when you want to switch to battle-stance. I'm not sure if a stance switch and a stance-locked ability can be done in one keystroke.

I dont really like stanceswitch + ability macros, (even though I use one button shield wall and such) so for me it has been ^ for battle stance followed by F2, F3 and if needed (druid for example) F4+. I don't like using F1, because its deep in my muscle memory that F1 is target yourself.

I use ^ as the main stance (or wand on priest/mage/lock) because I played rogue for a long time and it was my stealth keybind. And I use the same keybinds for all classes (may not use some if there are too many).

There are really cool macros for spell interrution on warrior btw!

Nethertheless, for paladin I would suggest using key modifier + mousewheel, because its handy to tab through your auras.

It is photoshopped but actually quite a nice idea.

Memes aside, I would actually use this. I feel like I can get this down easily and be able to stance dance faster than a keyboard bind.