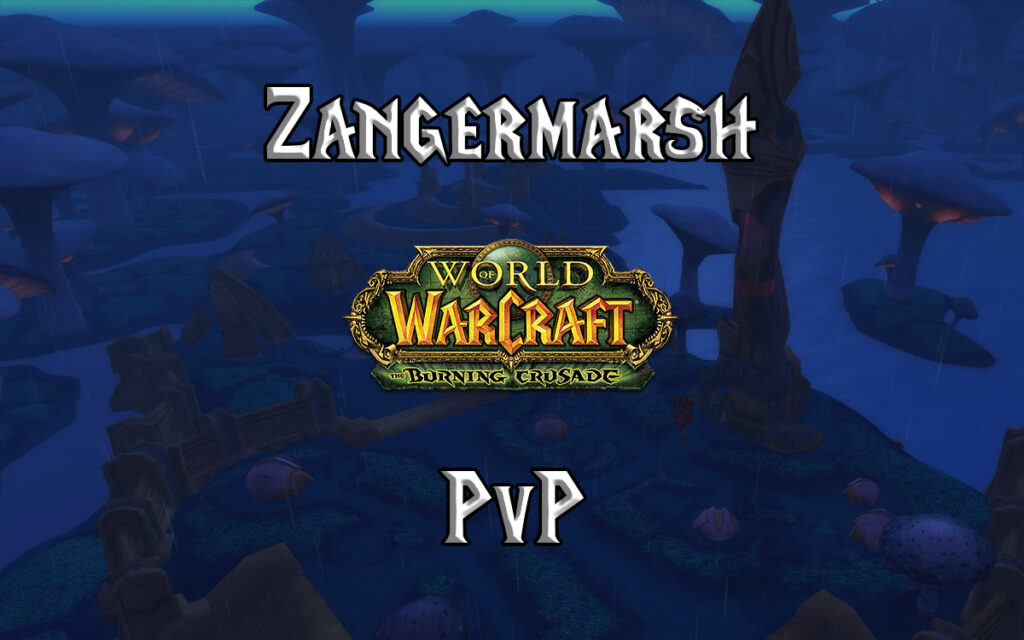 Zangarmarsh's serene pools and streams, and the soft phosphorescent glow emanating from the native flora and fauna, combine to create a soothing atmosphere – a perfect contrast to the epic battles soon to rage there. In their war efforts, both factions seek to control the Draenei structures known as Twin Spire Ruins for their strategic importance within the region. Twin Spire Ruins are comprised of three buildings which are located on the southern shores of Serpent Lake. The area within and around Twin Spire Ruins is designated as another World PvP zone in which Horde and Alliance players will fight over its control. In order to occupy the area, one side must capture the two beacons on the east and west sides, and then bring their flag to the center tower. Once the tower is under your control, the graveyard at Twin Spire Ruins will be usable by your faction's side, a zone wide buff will benefit your faction, and you will be able to purchase token-based rewards from special NPCs.

Gaining control of a beacon is based upon the Hellfire Peninsula capturing process described http://www.worldofwarcraft.com/pvp/worldpvp/index.xml#capturin g">above. Whichever side has more eligible players in the beacon's immediate vicinity begins to capture it over time. Once a beacon has been captured, it will glow blue for Alliance or red for Horde. Both beacons must simultaneously be under the same faction's control in order for that faction to then attempt to capture the center tower.

Once both beacons are under one faction's control, players from that faction may obtain special flags from Field Scout NPCs. These scouts are stationed by either Telredor or Zabra'jin. A player holding a flag will appear to have a large graphic of a flag being carried on his or her back. If that player manages to successfully take that flag to the center tower control point, the tower will be captured. If the player running the flag is defeated before reaching his goal, another player may attempt a run by taking a flag from the scout. If at any point a beacon changes hands so that both are not under one faction's control, the field scout for that faction will immediately cease dispensing flags.

When one side has successfully captured the center tower, they will gain access to the graveyard at Twin Spire Ruins. Additionally, all players of the controlling faction will get a zone wide +5% damage buff.

All honorable kills that take place within the sub-zone Twin Spire Ruins, will be rewarded with a single token for the appropriate faction. In turn, these tokens may be turned in to the Field Scouts for special items. These are the same tokens that are earned in Hellfire Peninsula World PvP (Marks of Thrallmar and Marks of Honor Hold), so they can be redeemed in both locations for rewards.