My biggest unanswered question heading into the battlegrounds release were some details about the PVP Battlegrounds. I wasn't sure if the cross-realm battlegroups would be kept to the same types, or if they'd mix PVP and PVE servers with each other. A blizzard blue post only mentioned that battlegroups will be full of servers 'from the same region', but I also couldn't tell if this meant servers on the same coast.

Well here is a picture from a battleground this morning (Player was on NA West Coast Fairbanks server): 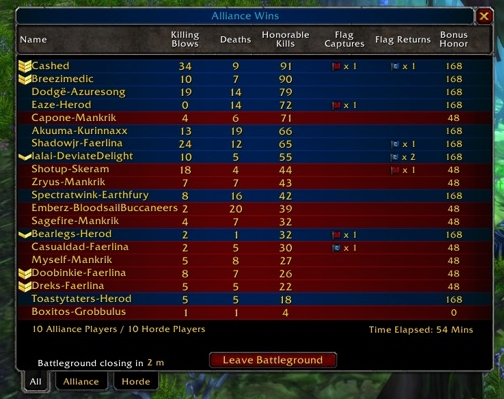 I think this is a good thing. A big problem previously has been horde roaming the landscape murdering everything in sight for honor points. In excessively large numbers. All I wanted for Christmas was for most of them to go away and find something better to do - and the battlegrounds should accomplish this. I was worried that Horde would have massive queues if the battlegroups were segregated by server type, since most players across PVP servers are horde and most players on PVE servers are Alliance. Since they are mixed together in the battlegroup, this brings me hope that neither side will have excessively long queues. This should mean that the rankers should be mostly occupied with battlegrounds, which should help make the PVP servers playable outside again. The occasional gank in either direction can remain - they add to the flavor of the PVP servers. But hopefully with PVP and PVE servers being mixed together in battlegrounds, the human centipede of horde stacked mouth-to-asshole from flight path all the way to every dungeon portal should be mostly gone.

Merry Christmas lads. I think it came early this year.

My only concern is that despite the overall battlegroup balance, it's likely that over time less PvE realm players will participate (which tends to be predominantly Alliance), resulting in increased Horde queue times. Right now everyone and their grandmother will grind AV rep, including all the carebears and casuals. I can't imagine that it will remain perfectly balanced long term, but the big question is how big the Horde queues will become. If they start looking at 30+ min queues down the road, I have no doubt that the roving death squads will once more make their way across Azeroth.

At the end of the day it can't possibly be worse than it is now. Phase 2 wPvP with no BGs is absolute rock bottom, and so I share in your optimism that we're finally turning a page.

Yeah I agree with the idea that players on PVE realms are less inclined to participate in PVP battlegrounds. But there still are more Alliance players over there than Horde, and it helps balance the sides a bit. I think it's still a net positive and should help decrease the queue times on the horde side more than if the battlegroups had been divided and kept PVP and PVE servers apart. I remain optimistic that things will return more to where they were before the honor system blew its load all over the place. Probably not all the way to the way things were, but at least somewhat close.

One guildie says he ran from Thorium Point to BRD and did not get ganked even once.

Looks like it's time to go out and get world quests done that you had to put off due to the PVP hellscape. The gankers will return at some point, but not tonight.

I was thinking that the mix of PvP and PvE servers would be a problem but the pros you've outlined are certainly changing my mind! Also, I play on the west coast and occasionally play on east coast servers and the lag is like 50ms more which isn't even noticeable imho so that shouldn't be a problem. Glad the BGs are out!

Well here is a picture from a battleground this morning (Player was on NA West Coast Fairbanks server):

A WSG lasting for 54 mins, I absolutely love that!

Any of you guys playing AV at all? How's honor in there?

Did Blizzard ever address the PvP mafia conundrum?

One thing to be aware of is that Horde on Sulfuras (NA East PvP) have reported a 10 minute queue for WSG, although AV is currently instant. Something we'll have to keep an eye on over time as I've mentioned before, since AV interest will certainly wind down once the bulk of the player base has reached exalted.