What, the caster guy melee-ing?? lol

Yeah, and he hits hard too. Vek'lor hits our warlocks for 3600 damage per melee swing when he chases them down and starts swinging. I've seen warlocks on the warlock reddit reporting having health pools of 9k unflasked. I'm not familiar with warlock gearing so I'm not sure how that's possible, but our warlocks are sitting at about 5k health unflasked. We gave out flasks of Titans to them last night, but even flasked they get two-shot with that kind of unexpected melee damage.

We were also short on healing, only had 9 present towards the end so that didn't help either.

Checking the warlock discord and I see that other raids are getting swung on by caster man too. Lots of ideas why, but it doesn't seem solved yet. All signs seem to point towards positioning being the root cause though.

How much health did your warlocks have during this fight?

Here's a snip from the logs:

11,344 damage across 3.21 seconds. Over the span of about 3 seconds, he got crushed for 4.4k damage, hit for 2.7k damage, and Arcane Burst on for another 4.1k. Our man Hotsoup got a snap priest shield, had a pally and two priests focused on him and it wasn't enough. The worst part is once Caster Man is in melee range, he starts casting arcane explosion for 4.4k damage instead of shadow bolts for 1.8k.

Here's a shot of a longer fight to see the average shadow bolt damage the warlock is normally taking:

The average damage for shadowbolt is 1.8k. If Caster Man gets up close, he can start bursting for almost 3x that amount, which the healers aren't prepared for. 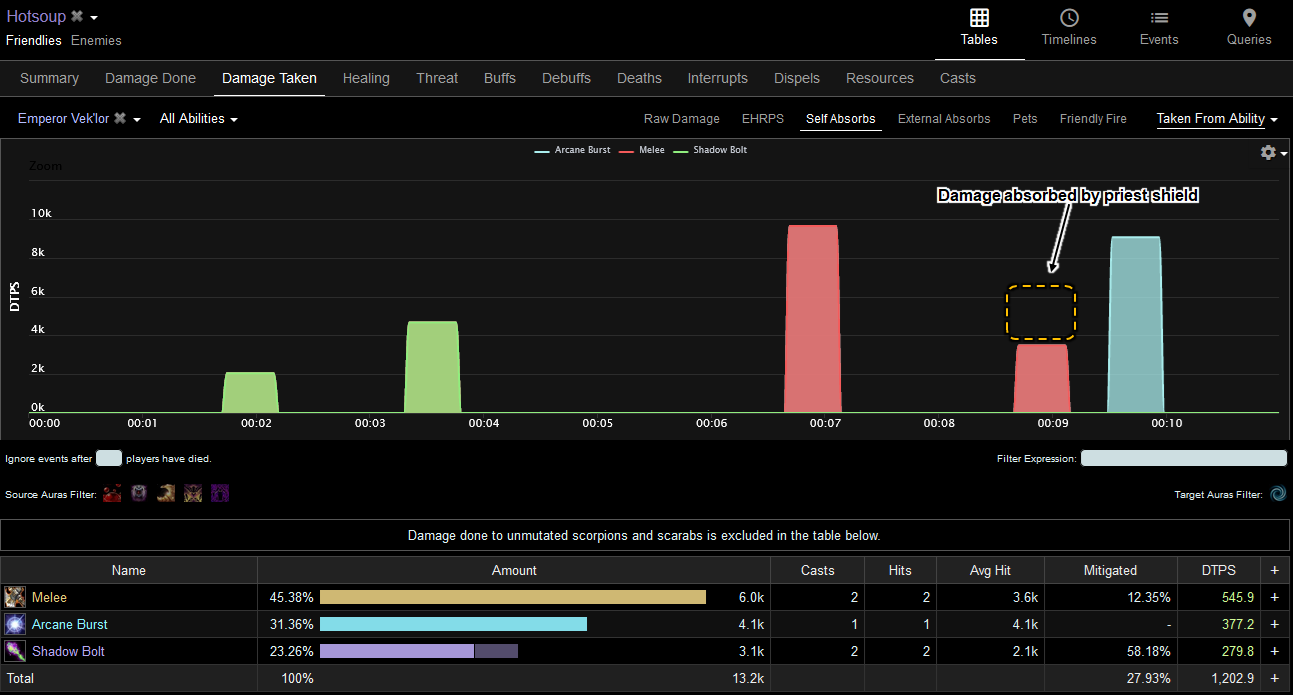 And oddly enough, Vek'lor started with two shadow bolts before deciding he was done casting. He cast two shadow bolts, stopped, ran over, and punched Hotsoup in the face twice then arcane explosioned him to death.

Still don't know why this happens but it happened a few times last night. Reviewing the logs, it happened less than I thought it did, but it killed the warlock every time it did and it was a quick wipe after that.

How much health did your warlocks have during this fight?

Never heard of that honestly lol I've tanked it about 8 times and he never punched me once.
I did hear your not suppose to tank him while you are on the stairs, maybe that is why he would want to punch the warlock...
I am the one pulling him so what I do is run back across the room towards the entrance and up the stairs.
I do this just to position him right in front of the torch and once he gets there I get off the stairs and spam searing pain.
He will not be up against the wall but thats where the warrior pulls the other guy to the wall when the teleport happens.
Once he teleports away I stand in front of the torch, a little to the left but not to close to the wall, enough to avoid arcane explosion.

I have around 6500+ hp without flask with 310 SR, probably more now cause I just got the staff which has a ton of stamina.
Cant wait for more gear to up my stamina so I can spec out of MD/Ruin, outside of twin emps is brutal dpsing without instant corruption and no improved life tap. The other warlock is around the same, havent flasked yet and dont feel the need its needed, and we downed them 2 out of the possible 3 times available.

OT : Very excited we just killed C'Thun last night was good night! We are no 7/9, Ouro and Visc left.

We always have the warrior be first to face the caster guy. But they don't do much and in the meantime the lock builds agro from a distance. Then the agro transitions and you're good. Since you have a warrior on each side anyway it's really pretty straightforward.

Stairs are bad and can make the twins do weird moves, you should not stand there, only as healer maybe. After pull, our warlocks stand in the triangle shaped corner next to the stairs where you get in by the way.

We also have the physical Tank next to caster Twin on teleport, but that is mostly because he stays in until the very end.
He always eats up to 3 shadowbolts on transition because afaik you get auto aggro after teleport if you are the nearest player. I would say shadowbolts do more damage though, about 3k, so our physical Tank needs some more healing even once caster Twin is there.

Also if you bring 9 healers, they better be very good - we are overall pretty geared and Twins are always a hard test for our Tanks and Healers, even though we usuallly have 11-12 Healers. We are Horde though, maybe palas really shine on Twins.

That said, last ID (clear number 4) we got to Twins with half of the Raid still having Worldbuffs and as Twins mostly demands big numbers it was considerable easier than our first 3 kills.

To be more helpful here is our last kill in WCLogs replay function https://classic.warcraftlogs.com/reports/ZaNfz9kFRb4XHKwQ#fight=40&view=replay .

We came back Thursday and killed the Twin Emps in one shot. We've been real low on healing recently, so a few of our DPS guys switched over to healing alts and we were able to bring 12 healers this time. We also kept the warlocks off the stairs and caster man stopped swinging at them.

Just gotta get Visc down now for a full clear. We're going to farm venom sacks from LBRS and try to cheese the fight that way.

We did the same thing this week, upped our healers from 9 to 12 and boy did it make a difference. Emps down tonight and on to C’thun tomorrow

We were able to full clear AQ in one night last week. Week 3 to do that felt pretty darn good, not gonna lie. I'm still waffling whether I'm happy or not that AQ has turned out to be easier than expected. Maybe my guild is better than I'm used to from past experience. It's hard to say but we are able to get through the stuff really smoothly.

Looks like most of you guys got AQ 9/9 down or is close to it!

Very nice, happy you'll all still be around and clearing!

We will be 8/9 tonight. Maybe we get visc down, but we're considering just killing it once and then skipping it forever after that. Its looking like an enormous money pit.

Have you gone through the tunnel after Twin Emps?