How are you guys getting on with AQ40?

Our guild did our first raid last night, managed to clear everything apart from C'thun, Ouro and Visc due to time.

We spent a good part of the raid wiping at Twin Emps which was really refreshing for once. That being said, once the tanks had their positioning down it was pretty easy after that.

Huruan needs absolutely no NR you can just burn her, lol.

I think the trash leading up to Twins and Twins themselves are probably going to be the most challenging part of AQ40 for most raids, what do you think?

I think C'thun will likely be 1 or 2 shot tonight, which is kinda disappointing but not unexpected.

Have you gone through the tunnel after Twin Emps?
That trash is much harder than the trash before Twin Emps.
once the tanks had their positioning down it was pretty easy after that.

That's the answer to all the bosses in AQ40, its very very easy once you get the strategy down. 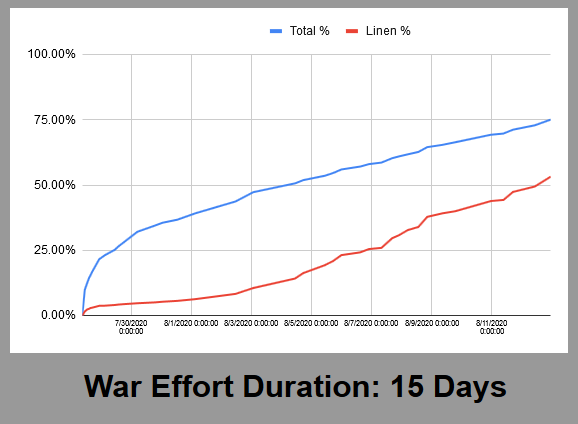 Our gates aren't open yet. We're not seeing the turn-in rate accelerate yet either. If that blue line stays flat then we're still about a week out from the war effort completing + another 5 days for it to arrive. I'm not expecting Fairbanks to open AQ for another week and a half.

Waiting for the gates to open, they open on Sunday for my realm, and luckily I get off work just a couple hours before the gates opening so I can watch it unfold hopefully (assuming Alliance don't just lock out the whole of Silithus, and I wouldn't put it past them.)

Have you gone through the tunnel after Twin Emps?
That trash is much harder than the trash before Twin Emps.

I have now and you are correct, that trash suuuucks.

Was in AQ40 yesterday for the first time in wow classic, we did a pretty fast and easy Skeram, Satura and Fankriss, then skipped Huhu. First thing to notice: trash is pretty hard, had to use big chainheals.

Then we wiped three times on the trash before Twins, until we got the hang of it. Did two solid trys on Twins and killed them on the third, once we got a better movement pattern.
Twins were lamer than I remember them from back then, basically a gear check - I think with full WBs or Naxx gear they are a effortless fight.

That was about 1.5 hours in. Then we slowly grinded our way through the trash before Cthun, and got there a good 45 minutes later. Trash wasn't harder than the one between Huhuran and Twins, but more pulls and longer fights.

After a 15 minute break for refreshing consumes and our fatigue we continued with Cthun. Did a shaky first try, followed by a long and thrilling second try. We got him down to 21% with about half of the raid not giving up and fighting until the very end.

That was a great confidence boost and we killed him pretty flawless in the third attempt, with only three deads.

Yeah I know, no cinematic picture, but that way my guildmates get some recognition too

With the Cthun kill momentum we ran back to Huhuran and casually killed her on our way back to the entrance.

Tomorrow our guild is entering AQ! I'm very excited. Hopefully we will be able to make solid progress and get C'Thun in one week.

Yesterday we continued to clear AQ40. We started later as planned, because our leadership wanted the full raid from the day before and some people couldn't be there early, as our normal raiddays are Wednesday and Thursday.

We started with a effortless and boring Bug Trio, then got over to Viscudus.

We did a botched first try, really underestimated the incoming damage. Then a very clean try until he bugged and became unkillable.
Followed by that one we killed him but it wasn't exactly the cleanest kill EU

Then we went on to Ouro which is a intimidating, but not considerable challenging boss, which we also could kill on a third try, that was going pretty well.

Then we took a moment to give ourselves a pat on the back, and ported to Orgrimmar to shout "9/9 first Id" and other victory toasts.

Overall it was a fun and expensive experience, but definitely more interesting than all raids we had before!

Also finally killed Ouro, which I never did in vanilla, so I got that achievement down.

We've had a bunch of our guys switch to engineering so they can drop sappers on that fight. We've also been stockpiling greater nature protection pots for months now, so I'm hoping we got enough in the bank to last us a while.

We have been practicing visc with the cheesing poison sac method. You can farm a lot of them quickly in LBRS and everyone can use them to make quick work of dispelling the poison waves. We haven't gotten him down yet but plan to tomorrow. Our best run got him to 6% so very close! The rest of AQ is clear though so solid work with our guild. I'm happy to see how we did.

My guild got stuck on twin emps during our first excursion into 40. I think we’ll crush it no problem this week though, there was a lot of learning that occurred last week.

My guild got stuck on twin emps during our first excursion into 40. I think we’ll crush it no problem this week though, there was a lot of learning that occurred last week.

Our guild did the same, had trouble with twin emps our first attempt but the following week we almost one shot them!
Ended up killing them the second attempt. I think our strategy was flawed a little because our first go at them, tried 5 times and only got like 1 or 2 teleports before we wiped. Very bad but it could also have been it was very late. Either way we are 6 of 9 now, hopefully get cthun down soon. Had a few very good phase two attempts

Yeah we got up to twin emps last night and got continually wrecked by the caster emp deciding to stop casting and he'd run up to the warlock tank and slap him into the ground. We don't have another raid night before reset, so our next attempt is going to happen on a fresh raid ID.

Wish we knew what causes caster man to stop casting and decide to start swinging on people.

Yeah we got up to twin emps last night and got continually wrecked by the caster emp deciding to stop casting and he'd run up to the warlock tank and slap him into the ground. We don't have another raid night before reset, so our next attempt is going to happen on a fresh raid ID.

Wish we knew what causes caster man to stop casting and decide to start swinging on people.

What, the caster guy melee-ing?? lol

He has never tried to swing at me or any other player...havent seen it before/yet.
Only the arcane explosion, blizzard and shadow bolt.
But the last attempt the melee guy decided to run at me when they teleported becuase i was the closes besides the tank but some how didnt get aggro first and swung at me. Did not hit me hard.

Yeah, every attempt ended with caster man stopping what he was doing, running up to the warlock, and swinging at him.

Checking with the Warlock discord shows other raids having the same issue. A couple of ideas right now involve potential LoS issues with the warlock being on the stairs, another being that if the warrior tank is too close during the swap then possibly caster man's shadowbolt goes on cooldown and he starts swinging. Doesn't look like anybody knows for sure what causes this yet, but all signs seem to point to positioning being a problem.