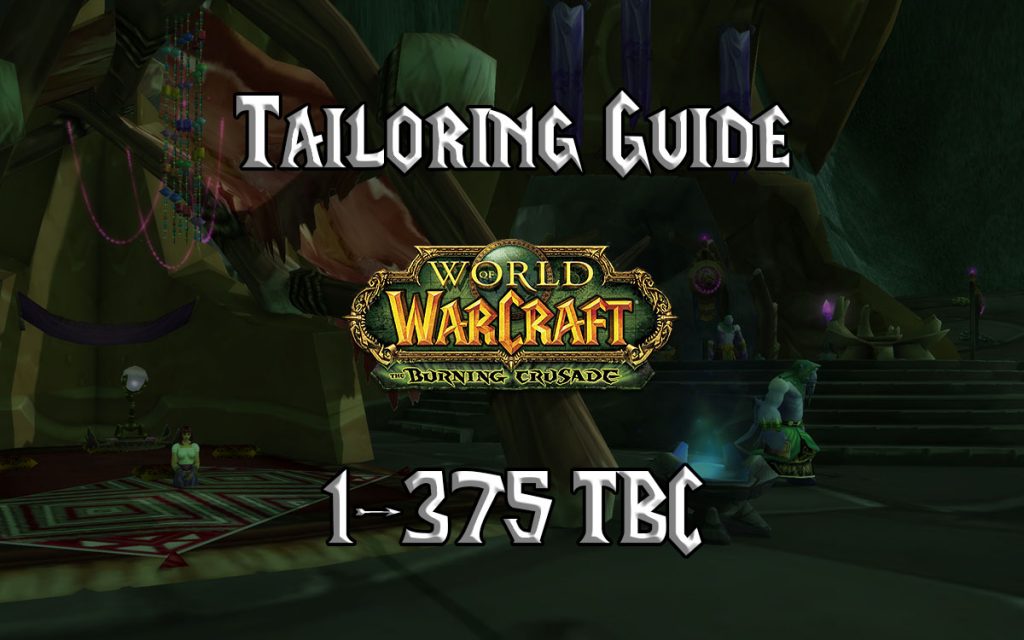 Tailoring allows players to make powerful Cloth armor for any spec, like Mantle of Nimble Thought and Hands of Eternal Light, and Spellthread enhancements to gear, like Runic Spellthread. To do so, Tailors use the cloth that’s looted off of humanoid mobs. They turn this cloth into bolts and those bolts into garments.

Because Tailoring is able to make gear for any spec, it’s an appropriate profession for any Cloth-wearer, and because it doesn’t have an explicitly paired gathering profession, it’s most often leveled alongside Enchanting.

Once you reach skill level 350, you’ll be able to choose between specializing in Mooncloth Tailoring, Shadoweave Tailoring, and Spellfire Tailoring. Keep reading past the leveling section to find out the benefits of each and how to learn them.

Tailoring was one of the professions that benefitted from Blizzard’s consolidation of profession trainers in Patch 2.3. Now, trainers in any major capital can teach you Apprentice through Artisan Tailoring.

In Outlands, your Master trainers will be in your faction’s first garrison, with all the other profession trainers. For Alliance players, the trainer is Hama at Honor Hold, and for the Horde, Dalinna will do the same.

All three Specialization trainers are close to one another in Shattrath’s Lower City. Next to them is also a mana loom, which will be necessary to create their unique types of cloth. The Mooncloth trainer is Nasmara Moonsong, the Netherweave trainer is Andrion Darkspinner, and the Spellfire trainer is Gidge Spellweaver.

Each type of cloth drops from Humanoid mobs in certain level ranges. They are:

* = range, depending on your choice while leveling

Once you’ve made enough bags, return to your trainer and learn Journeyman Tailoring.

After you have finished stitching, you should train up to Expert.

Once you reach at least skill level 200, you are able to return to your trainer and learn Artisan Tailoring. Taking a break after these pants is the most convenient time, however.

Before you continue, you’ll need to visit Qia at Everlook in Winterspring in order to purchase Pattern: Runecloth Bag but you can learn Pattern: Runecloth Gloves from trainers in the major cities. Though you may have to wait if someone else has purchased either recipe before you, the materials they save make it worthwhile.

After you’ve finished with the gloves, it’s time to cross into Outlands and become a Master Tailor.

The steps to finish leveling are some of the trickiest. No matter what you do, Pattern: Arcanoweave Boots, -- a rare drop from Sunseeker Astromage in The Mechanar -- is the most advisable way forward. Though it may take time to find it, it will allow you to spend the fewest materials necessary to cap.

You can even make these Tunics until you reach 375, but the material cost for that can become quite high if you don’t have Bolt of Imbued Netherweave or Netherweb Spider Silk on hand.

Once you reach skill level 350, you can head to Shattrath’s Lower City and begin your Specialization quest. Specialization has two primary benefits. The first is that when crafting either Primal Mooncloth, Shadowcloth, Spellcloth you will make two per cast, depending on which specialization you choose. The second, is that you will be able to craft a unique set of Epic Cloth armor (waist, chest, and shoulder slots) with powerful bonuses.

The Mooncloth armor allows mana regeneration while casting and buffs Int and Spirit. The Shadoweave set heals players for 2% of the damage Frost and Shadow cause and buff Int and Stamina. The Spellfire set buffs Int and increases spell damage by 7% of your total Intellect.

Based on the Armor, or on which cloth you feel like selling, the choice of Specialization is yours.

Once you do, you can return to Lower City and learn Mooncloth Tailoring.  In addition to proccing an extra Primal Mooncloth when you craft, you’ll also be able to make the Primal Mooncloth Armor Set, which offers 5% mana regeneration during casting while wearing all 3 pieces.

To become a Shadoweave Tailor, you’ll need to take the Becoming a Shadoweave Tailor quest from Andrion Darkspinner in Lower City. He’ll give you a gem, which you must take to the southeastern edge of Shadowmoon Valley, on the cliff before Netherwing Ledge. There, you will use it on the Altar of Shadows target.

After you return, Andrion will teach you the Shadoweave Tailoring ability, and you’ll be able to craft Shadowcloth. Specializing in Shadoweave also means you’re able to craft the Frozen Shadoweave armor set, which offers 2% healing from the damage caused by Frost or Shadow spells while wearing all 3 pieces.

Once you’ve killed the nether-wraith and returned its essence to Gidge, she’ll teach you Spellfire Tailoring. Not only will this let you proc more Spellcloth while crafting, but it will also allow you to craft the Spellfire armor set, which increases spell damage by 7% of your Intellect.

Netherweb Spider Silk is an important material in crafting your Specialization armor sets. You also used it while you power leveled to craft several pieces of gear. Before gear starts to rely entirely on specialized cloth, Netherweb silk is an important, and potentially profitable reagent.

Netherweb has two readily available sources. The first is Dreadfang Lurker in Terokkar Forest. Given their relatively low level and abundant spawns just East of Shattrath City, collecting the web from them shouldn’t be overly difficult. The second source is Blackfang Tarantula in The Black Morass instance. The Tarantula has a higher drop chance than the Dreadfang Lurker, but because you need to be in a party to effectively clear the area, it’s much harder to gather.

The author of this post needs to go through it again. There's nothing between 215-220, and you'll need significantly more silk cloth than the guide had stated (approximately 140-180). Additionally, I'm not certain as to why they list 200 wool cloth being needed, as wool takes 3 cloth to make 1 bolt. 200 is not divisible by 3, and you end up with a fair excess amount of bolts too.

Hey, appreciate the feedback, we'll take a look through where we missed 215-220 and the silk needed.

As a note on the required materials it's never going to be exact, it's just an estimate as sometimes the skill up is yellow and won't happen every time.

You interchange Shadoweave Netherweave several times throughout, is it Shadoweave?

Is there character level requirement for tailoring specializations? As Alchemy has lvl 68 for the quests to become available?

According to https://tbcdb.com/?quest=10831 you have to be 60 to acquire the Becoming a *Specialised Cloth* Quest

58 requires for the quest

That's a great catch! I've edited both the shopping list and the requirements for the items mentioned.

You do not get the runecloth glove pattern from Qia in winterspring. It changes to be something you learn from the tailoring trainer near Tarren Mill.

Honestly this should be taken down... several of the recipes require WAY more ingredients than listed here. This may have worked in beta, but not production.

I think I managed to find them all for you. They should all be Shadoweave now.

Would you be able to elaborate on the recipes that you noticed didn't have sufficient materials listed? Feedback is always welcome and I appreciate you taking the time to let us know!

My bad. The recipes above don't have the quantities in them at all -- I assumed no quantity meant "1". Would be nice if they were updated with quantities, though!

if you ctrl+f netherweave, there's still at least one missing 😛 in the introduction to specializations when referring to andrion darkspinner. Thanks for making this btw