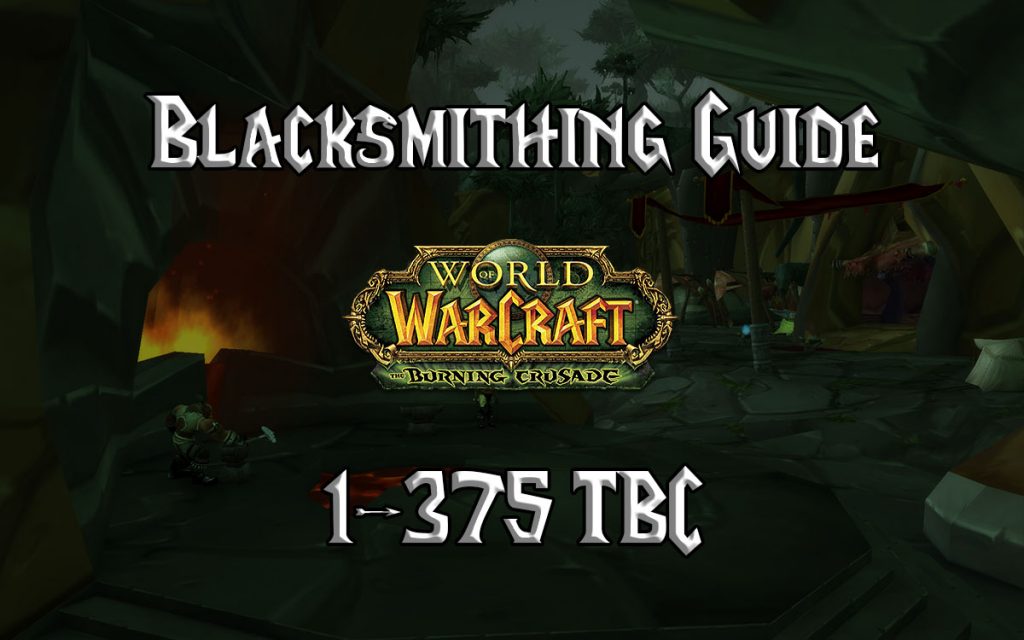 Blacksmithing is one of the most valuable professions in all of WoW. It allows players to craft their own mail and plate armor as well as one and two-handed maces, axes, and swords. While in Vanilla, Blacksmiths were able to craft a number of high-value, endgame recipes, Blizzard has chosen to greatly expanded that in TBC. Once Blacksmiths cap, they’ll be able to begin sequences that end in crafting gear like Bulwark of Ancient Kings and Embrace of the Twisting Nether or weapons like Bloodmoon, Dragonstrike, and Blazefury as well as a vast number of BoE epics like Oathkeeper’s Helm and Hammer of Righteous Might.

To complement this, Blizzard has added to the existing specialization, Armorsmithing. The value of Armorsmithing has increased.

Most smiths choose Mining as their gathering profession, as Blacksmithings huge potential can also come with a huge price tag, if you choose to buy your materials on the AH. This combination is suitable for most classes that wear Mail and Plate armor, regardless of spec, though it is especially beneficial for Tanks and Melee DPS.

Since Patch 2.3 Blizzard has streamlined the process for training most professions. As a result, trainers in any major capital can teach you from Apprentice through Artisan. Because the only recipes you’ll need to acquire before heading to Outlands are in Gadgetzan, it would be the most advantageous to train in a capital in Kalimdor if you’re power leveling, but this isn’t required.

Once you cross through the Dark Portal, the Master Blacksmithing trainers will be in your faction’s first outpost in Hellfire Peninsula. This means Alliance smiths will need to find Humphry in Honor Hold, and Horde players will speak with Rohok at Thrallmar.

There are also additional trainers from both the Aldor and Scryers once you reach Shattrath. In Aldor’s Rise, any player with the appropriate reputation can learn from Onodo, and Barien will do the same in the Scryer’s Tier.

*only needed if you are unable to find Plans: Mithril Spurs

Once you’ve completed making the leggings, return to a trainer to learn Expert.

When you’ve finished forging your helms, you’ll have enough skill to become an Artisan Blacksmith.

The path between 235 and 275 offers you a number of choices. The most efficient is to craft Mithril Spurs. To do so, you’ll need Plans: Mithril Spurs, a rare world drop. If you have not found it yourself or do not feel like trying to farm for it, you can search the Auction House. If it is unavailable, there are still other options available.

After you’ve finished crafting the bracers, you can cross through the Dark Portal and become a Master Blacksmith! For the first few levels, however, you’ll still be crafting Vanilla recipes in order to maximize the more easily gathered materials, so hold onto your Thorium Bar for a bit longer.

Before continuing, you’ll need to purchase Plans: Lesser Ward of Shielding. It can be bought by Alliance players from Mari Stonehand at Wildhammer Stronghold in Shadowmoon Valley and by Horde players from Rohok at Thrallmar. This is also a good time for all players to purchase Plans: Adamantite Weightstone from Feydryen Swiftspear at Cenarion Hold in Zangarmarsh. The Weighstone Plans require you to be Honored with the Cenarion Expedition to purchase.

From 360 - 375, your path to capping will depend on whether you have reputation with the Aldor or the Scryers, as the most efficient crafting patterns are purchased from their Quartermasters.

For the Aldor, you’ll have to be at least Revered to finish leveling. When you’ve reached Honored, you’ll need to purchase Plans: Flamebane Gloves from Quartermaster Endarin in Shattrath, and when you get to Revered, you’ll buy Plans: Flamebane Breastplate.

To cap with the Scryers, you’ll also need to reach Revered reputation. While you only need to be Friendly with them to purchase the Plans: Enchanted Adamantite Belt from Quartermaster Enuril in Shattrath, you’ll need to reach Revered to purchase the Plans: Enchanted Adamantite Breastplate. While it may be unbalanced, the Scryers path costs significantly more than the Aldor path to complete.

And you’ve capped! Congratulations! Continue reading to find out about the benefits of each specialization and to see a comprehensive list of Endgame BoE recipes.

To become an Armorsmith, you’ll begin by taking The Art of the Armorsmith quest from either Grumnus Steelshaper in Ironforge or Okothos Ironrager in Orgrimmar. Regardless of faction, this will require you to craft:

In total, the materials needed to craft that are:

After handing those in, you’ll become an Armorsmith and will be able to craft unique, high-level mail and plate gear which Weaponsmiths cannot. Check below for the high-level recipes!

In total, the materials for those are:

Once you hand all of those in, you’ll become a Weaponsmith and be able to craft specialized Axes, Maces, and Swords.

In TBC, Blizzard has expanded the Weaponsmith specialization to include three sub-specilizations: Swordsmithing, Hammersmithing, and Axesmithing. These do not require the additional completion of any quests and can be learned from a group of NPCs in Everlook, Winterspring.

Each has distinct advantages in the Weaponsmithing specialization, and you can check the list below to see which recipes will suit your needs best.

Each of these crafting chains is learned from your Armor or Weaponsmithing trainers.

Next are the lists of BoP and BoE plans that all smiths are able to make. In TBC Blizzard has added an unprecedented number of plans for BoE epics, so there are plenty of opportunities to make a good deal of profit for players who are willing to invest their time or gold into acquiring them. For BoE items specifically, there will be multiple zones, dungeons, and raids that they can be found in, unless otherwise specified. The list following that is made up of recipes you can only purchase after having met reputation requirements with certain factions. Click through the plans in each list to find the specifics for the item of your choice.

Not to nit pick, but is it not Violet Eye and not Violet Hold for the frost res recipes

You mean to tell me a WotLK dungeon doesn't have anything to do with BS recipes?!
Got that updated, thank you!

should be "Fel Iron Plate Boots" or "Fel Iron Chain Bracers" Costs 6 fel iron per skill instead of 9 iron per skill, both Orange, Thanks for the great guide overall tho!

also 330 - 340 seems like it should be Fel Iron plate, 1 more fel iron per craft but orange skill instead of yellow of the chain

Some of the engame plans listed under "BoE" are actually zone drops from the Tempest Keep and Serpentshrine Cavern raids.

As well, there is a good alternative to level from 360-375 by crafting 10 Khorium Belts (360-370) and 5 Khorium Boots (370-375). The plans for these are BoP, and are farmed from specific mobs in Nagrand(Murkblood Raider) / Netherstorm(Disembodied Protector) with a 2-3% droprate per mob. The total material cost going from 360-375 using these amount to:
35 Primal Mana
35 Primal Water
50 Khorium Bars

Probably alot cheaper than the Aldor/Scryer methods. Plans for the Khorium Belt could be hard to farm at launch though, what with all the questing people sweeping the mobs. Scryer items are potentially very useful too if Blizzard goes with prenerf Solarian (requires arcane resist), compared to the Khorium items which are mostly useless as anything but DE fodder or crappy holy paladin gear. Same goes for Aldor items come Black Temple, as fire resist is needed on a couple of tanks for Illidan.

Hmmmmm just for info the Aldor path is the one that costs SIGNIFICANTLY more on my server. Check AH prices for your server before following this or you'll find yourself disapointed when you see that the Aldor path costs you over 4 k gold when the Scryer would cost you 1400 gold total... Great guides, they have been a lot of help!

Hi, so far so good. Imo there are a few things, which can be way better or at least a different way. I want to mention all the Spike recipts, which have different lvl-points and also are quite "cheap" to craft.

The Thoriumschildspike as example is a very rare drop, but extremly cheap to craft.
You go from 275 up till 295 (still orange) for just 4 thoriumbars and 2 essent of earth + stone (which you can lvl up earlyer).

All in all 20 quite cheap lvl ups, if you get the recipt and the essence of earth.
Late into TBC that might be also expensive, but right now its a cheap way to prepare.

The other 2 spikes are the mithrilschildspike and the ironschildspike.
Mithrilspike is in the steel-area and it might be cheaper as the steel. Especially as the steel part you mentioned in this guide, need way more steelbars.
the mithrilspike are worth 20 lvl-ups from 215-235.

Hey guys, as a armorsmith in WoW Classic, Am I able to obtain the Blacksmithing weapon recipes? or would I have to drop BS and re skill up to select weaponsmith? thanks

Do i need to become weaponsmith on Classic? Or on TBC gonna just learn to be sword/mace/axe-smith from the trainers? Wait for TBC and the specialization can be changed for a gold cost without the need to restart blacksmithing from level 1. The cost scales as you gain in level, so if you plan on crafting some armor pieces before switching to weaponsmithing, there will be a higher cost, but may be worth it depending on how much materials you have stowed away.

If you have not chosen a specialty yet, then you can go into weaponsmithing, then do the sub-specialty in TBC when it becomes available. If you are currently an armorsmith, see my reply above.

Looks like the "total required materials" list is missing dense stone, yet it is advised to make dense sharpening stones for leveling blacksmithing from 250 to 260. It might be worth going over that list again to make sure that nothing else is missing.

What he is asking is does the base weaponsmithing quest get nerfed/removed or will it still require doing the crafted before you can get the BC Axe/Mace/Swordsmithing.