I have been wanting to build a high/mid ranged system that runs Linux to game on ever since I installed Linux Pop!_OS on my Asrock Deskmini A300. So, I've been collecting parts this past week from some older computers I have lying around. Except for the RX 580, I just purchased that brand new from Newegg. The current parts I have are as follows. 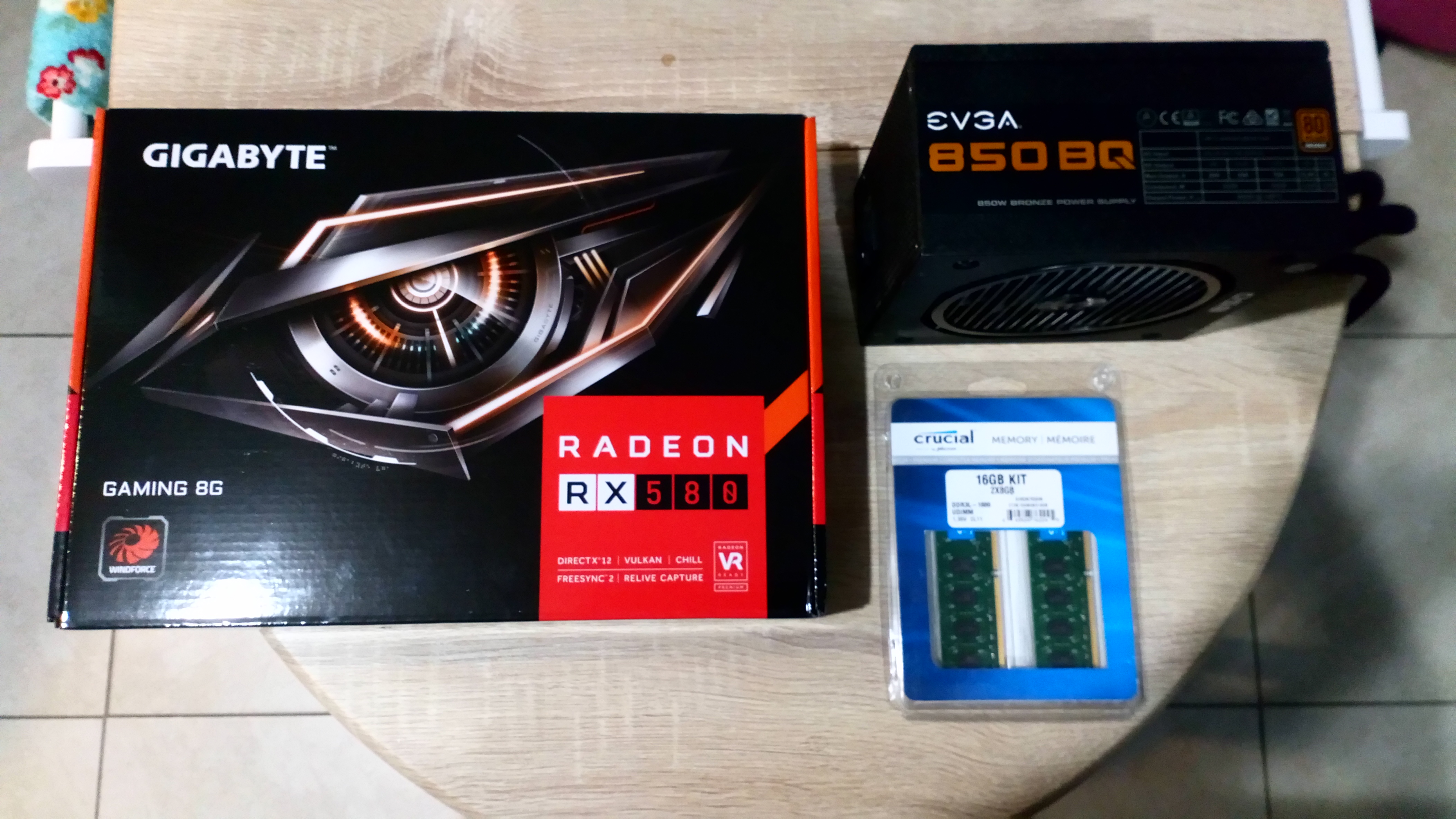 My end goal is to have a high to mid ranged Gaming Machine running Linux, as mentioned above. Now..as far as CPU I have my eye on two Processors.

Now you're probably thinking, "Knoxtane, both of those processors are old ESPECIALLY the Intel 3rd Gen". Yes, you are right. However, when you're on a budget and want something that's cheaper but still worth using, these are my two best choices..in my opinion. Sure the Ryzen 3 3100 is also a really good choice, but it's not what I'm looking for.

Now, why would I go with the Ryzen 7 1700? Newer, faster, better, stronger..well technically it is. However, I don't need a SUPER powerful CPU to pair with my brand new RX 580 GPU. I found a website that "calculates" bottleneck in 1080p, 1440p and 2160p (4K). However, I personally only play in 1080p. So the bottle neck with the Ryzen 7 1700 paired with an RX 580 in 1080p would roughly be 8.79%. This percentage is higher due to the CPU being slightly more powerful well..processing. (from my understanding) Another reason why I WOULD go with this is DDR4 memory compared to DDR3. But as I mentioned above, if I spent money on a new kit I would be down another $50-$75 for DDR4.

Final question, what games do I plan on playing?

Well, I play a lot of Source Engine games..i.e. Counter-Strike: Source, CS:GO, Insurgency, Half-Life 2. The other types of games I play are DOOM (2016), World of Warcraft (Retail and Classic) and some Battlefield Bad Company 2 and BF4. Not very demanding games even on an RX 580. That's pretty much all I play right now.

If you took the time to read all of that, I appreciate it. What are your thoughts? This is a discussion...so please, lets keep it as such.

that i7-3770k was an ivy bridge CPU which was supported by a bunch of different chipsets. Just avoid any motherboard using an H61 chipset. Of all chipsets that supported those CPUs, the H61 was a budget chip unique in the lack of SATA3 support. Motherboards based on that part would only support SATA2. Anything else from that generation will give you at least a single SATA3 port. It was still a new feature back then.

The SATA2 bus only supported a throughput of ~~~250ish MB/s, and SATA3 brought that number up north of 500.... around 550 MB/s. No reason to gimp your storage performance.

that i7-3770k was an ivy bridge CPU which was supported by a bunch of different chipsets. Just avoid any motherboard using an H61 chipset. Of all chipsets that supported those CPUs, the H61 was a budget chip unique in the lack of SATA3 support. Motherboards based on that part would only support SATA2. Anything else from that generation will give you at least a single SATA3 port. It was still a new feature back then.

The SATA2 bus only supported a throughput of ~~~250ish MB/s, and SATA3 brought that number up north of 500.... around 550 MB/s. No reason to gimp your storage performance.

Yeah. I've found a Chinese motherboard that this company still manufactures. it's a B75 chipset.

I wouldn't buy that. I work in the industry. Not only have I not heard of that company before, I asked some of my counterparts over in Taiwan and they've never heard of them before either... So they're a very small company. Couple of problems there:

Intel doesn't make those chipsets anymore. They're sourcing these chips from e-waste - motherboards thrown in the trash for whatever reason are having the chips pried off, reballed, and soldered down to new motherboards. What is the expected MTBF for a chipset recycled from an unknown aging motherboard recycled for an unknown issue and sent back through reflow? lul

That company is small enough that my colleagues in Taiwan who design and sell into the Chinese market haven't heard of them either. You can imagine what this means for support, BIOS and firmware development, etc. Asus/Gigbyte/Asrock/etc has a firmware problem with an active product, AMI gets involved and helps debug... who steps in and helps debug a BIOS/firmware issue for a small volume board vendor using end of life recycled parts? Nobody, so expect buggy firmware.

your options for an 8 year old CPU is either used or "new" motherboards re-manufactured from e-waste. The chipset in these boards are single sourced from intel and have been discontinued long ago.

How about this one?

I was looking at used Z77 motherboards on ebay and I can't believe the prices these things are going for. It's unreal.

honestly that R3-3100 you mentioned in the OP is going to be about equivalent to that i7 from 2012. And that CPU + a B550 motherboard are going to cost about as much new as that 8 year old CPU and accompanying used motherboard. And they'll be in warranty, and they won't have 8 years of hours on them. I'd be more down for obsolete computer hardware if it sold for a lot less than it does. But as it stands, these things cost about as much as equivalent brand new parts which makes them hard to justify.

Computer hardware does have a service life. Capacitors are rated at a specific # of service hours before they start to break down. Tiny little traces that make up the metal layers in a CPU die experience wear as well, over time they do degrade. An 8 year old i7-3770k, especially a K model which was unlocked to enable overclocking and probably spent a good chunk of its life at higher-than-stock clocks and voltages, is going to be much closer to the end of its service life than a new box of kit will. I wouldn't recommend spending hundreds of dollars to bring up such old parts.

I've been down this path of 'lets upgrade this old computer by buying some used enthusiast hardware from the sandy/ivy bridge generation' myself recently and just couldn't justify it. People are asking way too much for what it is based on what you can get brand new.